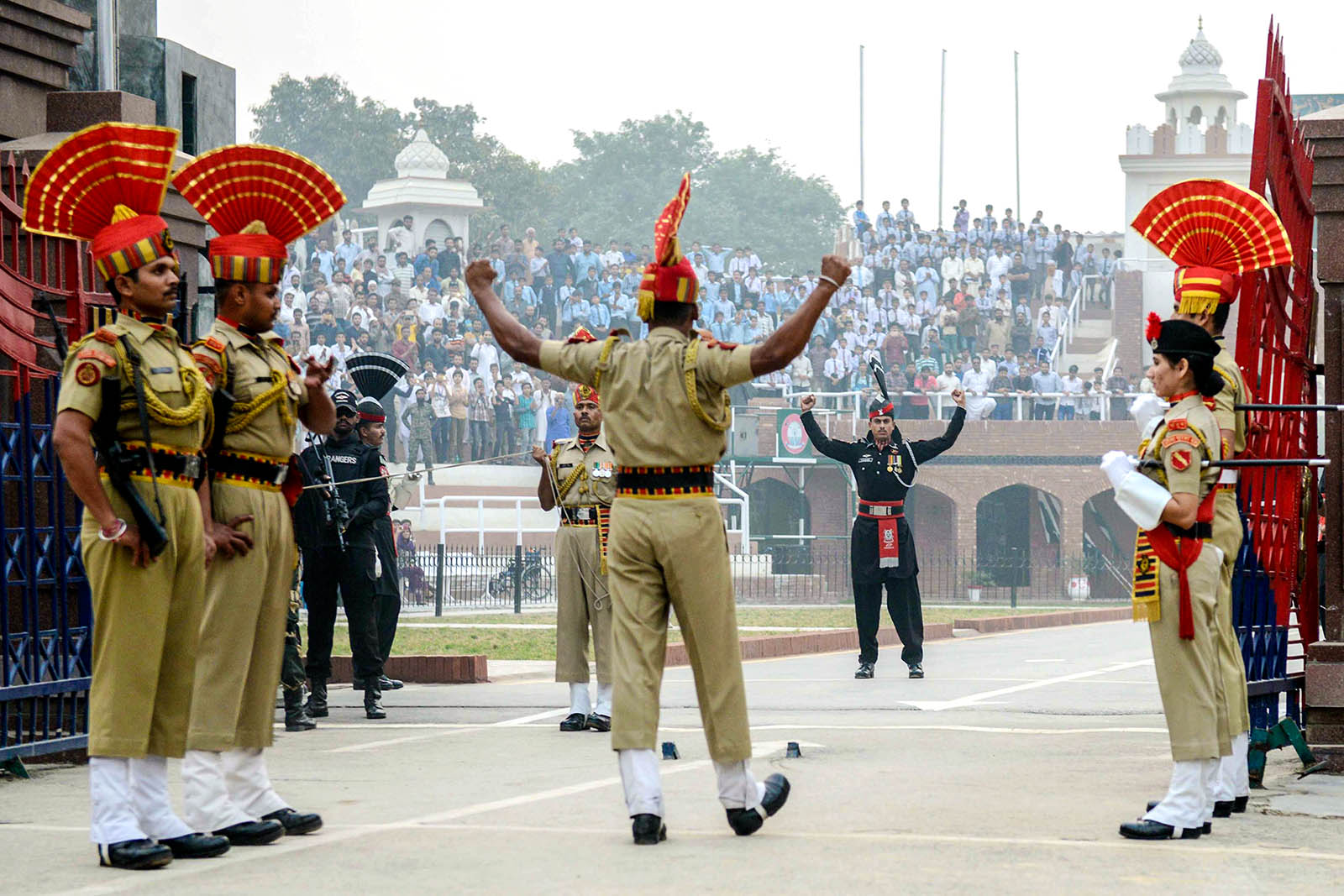 Indian border force personnel (brown) and Pakistani rangers (black) take part in the daily beating of the retreat ceremony at the India-Pakistan border near Amritsar, October 2017.

Despite seventy years of constant tension and sabre-rattling, trade between between India and Pakistan is growing steadily. The political relationship between the two countries is dogged by claims and counterclaims of terrorism and cross-border violations—such as recent allegations by Pakistan that their diplomats and families were subjected to harassment and intimidation by Indian intelligence services. The two countries are usually framed in diametrically opposed terms: Pakistan as a nuclear-armed hotbed of terrorism with a penchant for military dictatorships, and India as the world’s largest democracy.

The impact of the tensions on the trade relationship is evident, as seen in this diagram. However, despite a close correlation between trade stagnation and major incidents of violence, the last 20 years have seen a steady growth.

Although Indian and Pakistani business leaders are aware of this tremendous potential, both sides continue to protest different aspects of the trade relationship. India has concerns about China’s involvement in the CPEC project—the China–Pakistan Economic Corridor—while Pakistan is worried about India’s bypassing of Pakistan through the development of the Chabahar Port in Iran.

The balance of trade has traditionally been in India’s favor – imports to Pakistan from India were more than five times the value of exports to India from Pakistan in 2015 – but recently this has begun to shift. A significant factor has been growing demand from India for Pakistani cement, which has been fortunate for Pakistan in light of a drop-off in demand from Afghanistan.

India’s industries involving machinery, machine parts, electronic appliances and chemicals are kept buoyant by Pakistan importing these goods from India. Additionally, India seeks to further grow the 40 percent increase in trade it experienced with China in 2017 by pressing the Chinese to open its markets for Indian pharmaceuticals and IT.

Business figures have lobbied their governments to improve trade opportunities, and reduce the disruption on the border in particular, where traders complain of everything from bureaucratic impediments put in their way to harassment by paranoid security forces concerned with their cross-border activities.

Because of pervasive tensions, informal trade is high as it bypasses customs and border officials and uses third party countries such as the United Arab Emirates. However, these circuitous routes add unnecessary time and costs and result in a loss of tax revenue for both governments.

India and Pakistan have proposed a number of solutions for improving their trade relationship. Long-standing agreements such as the South Asian Free Trade Area can act as a valuable mechanism, while India’s awarding of most favored nation status to Pakistan in 1996 has certainly helped.

According to Mohsin Khan of the Atlantic Council, Pakistan risks its entire future if it does not recognize India’s role as the regional growth engine, and that “Pakistan must hitch its wagon to the locomotive or risk getting completing left behind.” Regrettably, this is not something Pakistan, with its security narrative of fear and suspicion of India, is ever likely to embrace. Officials promoting cross-border trade continue to weather “nationalistic diatribes” in Pakistan where officials have to deflect any suggestion that their motivations present a danger to the state.

All too frequently, security concerns, either in the form of an actual attack or the specter of violence, intrude into what should be a mutually highly advantageous trading relationship.