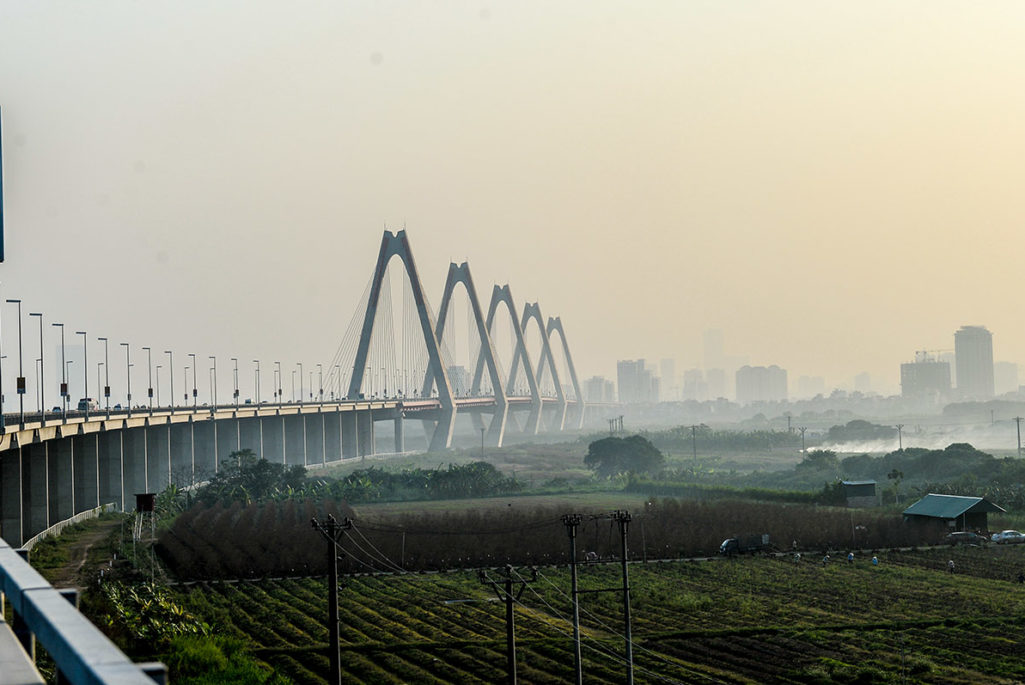 The Nhat Tan bridge seen from the Southern bank of the Red River in Hanoi. The bridge was built with funds from the Japanese government.

Developing Asia needs to invest a whopping $26 trillion—$1.7 trillion per year or 5.9 percent of projected GDP—between 2016 and 2030 to meet its infrastructure requirements, according to Meeting Asia’s Infrastructure Needs, a new report by the Asian Development Bank (ADB).

The region’s baseline requirements—without considering costs related to climate change mitigation and adaptation—stand at $22.6 trillion, or $1.5 trillion per year (5.1 percent of projected GDP).

The region’s failure to make the necessary investments in infrastructure will greatly constrain its ability to maintain economic growth momentum, to eradicate poverty and to tackle climate change. The new estimates from the ADB are more than double the $750 billion it estimated in 2009.* The inclusion of climate-related factors has contributed majorly toward the increase. The forecast for continued rapid economic growth, however, is a more important reason.

Of the various subregions, East Asia is expected to account for 61 percent of all climate-related investments between now and 2030. As a percentage of GDP, however, investments need to be highest in the Pacific (9.1 percent), followed by South Asia (8.8 percent). Developing Asia currently invests about $881 billion per annum in infrastructure (for 25 economies with adequate data, comprising 96 percent of the region’s population), but the infrastructure investment gap stands at 2.4 percent of projected GDP for 2016-2020 when climate-related adjustments are accounted for. In fact, when China is excluded, the gap rises to 5 percent of GDP. According to ADB, strong fiscal reforms could lead to the generation of additional revenues equivalent to 2 percent of GDP, bridging about 40 percent of the funding gap. Even if that happens, the private sector will still need to cover the remaining 60 percent shortfall, and to do so, it will need to increase its annual investments in infrastructure from $63 billion today to $250 billion over 2016-2020.

How Can the Gap be Funded?

There are various measures that can be taken to narrow the infrastructure funding gap in developing Asia, according to the report.

Regional governments need to adopt innovative approaches to bolster infrastructure financing, such as “land value capture” to finance infrastructure, or capital recycling, which refers to the selling of brownfield assets, auctioning concessions and allocating proceeds to finance greenfield infrastructure.

Separately, the private sector should be encouraged to play a greater role in funding infrastructure development, particularly in sectors such as telecommunications and power generation. Reforms in public finance are expected to make up for a little less than half of the infrastructure gap, which means private investment has to increase “dramatically,” according to the report.

However, doing so will require regulatory and institutional reforms so that investing in infrastructure becomes more attractive to private investors. Additionally, a pipeline of bankable projects needs to be developed, including public-private partnerships (PPPs). Going forward, Asian governments need to implement PPP-related reforms including streamlining PPP procurement and bidding processes, providing legal recourse to investors and establishing standalone government units focused on PPPs, among others. Finally, a deepening of capital markets is also required so that the region’s substantial savings can be used to fund infrastructure investment.

An Urgent Need for Action

“The infrastructure financing gap can’t be fixed by any one party,” said Blair Chalmers, a director for the Marsh McLennan Companies’ Singapore-based Asia-Pacific Risk Center, which is currently working on infrastructure bankability issues. “There is a deeply connected ecosystem of stakeholders that must take action, individually and in partnership, to achieve meaningful progress on a topic that is of regional importance,” Chalmers said.

While Asia’s infrastructure has improved significantly in the past decade—especially in areas such as electricity generation, transportation, and telecom and water infrastructure—and this has resulted in strong economic growth and a reduction in poverty, the reality is that an ample amount still needs to be done. More than 400 million Asians still lack electricity, about 300 million don’t have access to safe drinking water and 1.5 billion people lack basic sanitation facilities. In several cases where this infrastructure exists, it is of poor quality.

As such, Asian governments have much to do in improving their infrastructure if they want to continue reducing poverty and improving the lives of their people.

* The inclusion of all 45 ADB member countries in developing Asia, compared to 32 in the 2009 report, and the use of 2015 prices versus 2008 prices also explain the increase.

Bart Édes Distinguished Fellow at Asia Pacific Foundation of Canada
URL: https://www.brinknews.com/asia-needs-26-trillion-in-infrastructure-investment-from-2016-2030/
Get ahead in a rapidly changing world. Sign up for our daily newsletter. Subscribe
​​