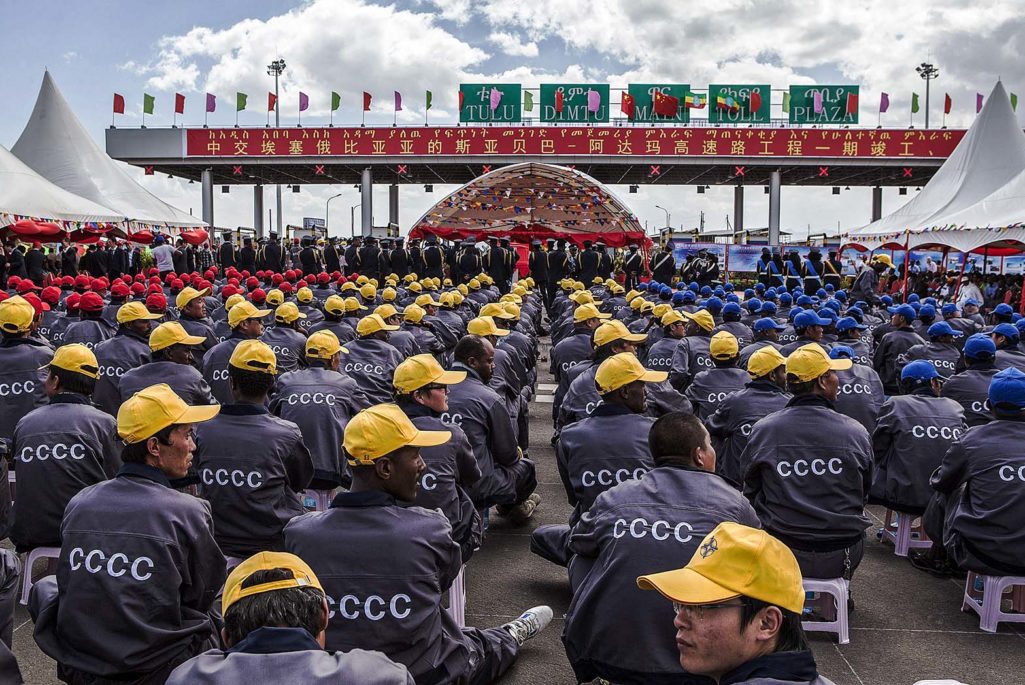 Ethiopian and Chinese workers of the China Communication Construction Company sit at the site of the Addis Ababa-Adama toll road on May 5, 2014.

Africa is fast becoming a new economic battleground in the ongoing competition between China and Japan. While this situation may, at first glance, imply that Africa can only benefit from it, there are attendant risks that have the potential to more than offset any gains for Africa.

Africa, however, isn’t the only potential loser; China runs the risk of losing its preeminence as Africa’s economic partner, too. Japan, like China, needs Africa’s mineral wealth to sustain its industry. Essentially, each player in this version of The Great Game faces its own set of risks.

Chinese interest in Africa arose from three needs: to establish a bilateral relationship as a growing power in its own right, to have access to energy and mineral resources and to establish itself as a champion of anti-colonialism. Beijing merely had to highlight the historical comparisons between colonialism in Africa and its own “Century of Shame,” during which it was subjugated and colonized by the West, to fulfill this last goal.

Ideology, however, pales in comparison to China’s astounding economic relationship with Africa. Sino-African trade expanded from $250 million in 1965 to $210.3 billion in 2013, making Beijing Africa’s largest trading partner for the last five consecutive years. By the end of 2013, China’s direct investment in Africa amounted to about $25 billion dollars; more than 2,500 financial, telecommunications, energy, manufacturing and agricultural Chinese companies conduct business there, creating more than 100,000 jobs. By the end of 2013, Chinese firms had won nearly $400 billion contracted projects in Africa and constructed more than 2,200 kilometers of railway and 3,500 kilometers of roads.

China’s reason for this investment in and trade with Africa isn’t purely altruistic.

China’s reason for this investment in and trade with Africa isn’t purely altruistic. It faces a combination of slowing growth, rising labor costs and a declining workforce caused by a rapidly aging population. Africa, on the other hand, provides a growing young pool of low-cost labor and plentiful natural resources. Slowing growth creates excess inventories, which likely caused China’s largest steelmaker, Hebei Iron and Steel, to announce in late 2014 that it would shift five million tonnes, or around 11 percent of its annual production, to South Africa. After all, why source ore from there, ship it to China, manufacture steel using more expensive labor, ship the product back to Africa and have to deal with environmental issues? Instead, it could be manufactured in Africa by Chinese firms that use cheaper labor, with the profits back to China. By creating employment in Africa, Chinese firms create local wealth that could also be accessed by providing cheap consumer goods such as household electronics, clothing and pharmaceuticals.

This situation is changing, however. Japan, under an aggressive national policy, is continuing its ongoing competition with China by confronting the latter in Africa. In the latter half of 2010, Beijing blocked exports of rare earth ore to Japan, which is famously deficient in mineral resources. The Chinese embargo was perceived as a direct assault on a major segment of Japan’s industry, electronics, which uses most of these minerals. Tokyo, looking ahead, anticipated further embargoes on other Chinese imports and the loss of China as a manufacturing base if relations continued to worsen. Japan’s government had two objectives in turning to Africa: obtain the commodities Japan needed and compete with Chinese influence.

Japan announced a $32 billion aid package to Africa in 2013. It is likely Japan will look to transform Africa into a global commercial hub by becoming an economic partner interested in investment and development of trade relations. While Japan has a long way to go to catch up with China’s trade figures, the political games have begun. Recognizing Japan’s potential to reduce China’s influence, Beijing’s Ambassador to the African Union, Xie Xiaoyan, called Japanese Prime Minister Shinzō Abe “the biggest troublemaker in Asia,” adding that China and Africa started cooperating first and supported each other for many decades when China was poor. This was countered by a Japanese Government spokesperson’s implied allegation of Chinese malfeasance when he remarked that “countries like Japan … cannot provide African leaders with beautiful houses or beautiful ministerial buildings,” and added that Japan prefers to “aid the human capital of Africa.” He was probably alluding to incidents such as when Chinese mine managers shot African laborers who were striking for better working conditions and pay. That incident and others like it have given Japan plenty of ammunition in its competition with China.

Japan has now established embassies in 32 African countries and is generally viewed positively. It has escaped the “neo-colonialist plunderer” label that has bedevilled China by being seen providing training that enables locals to gain better employment in addition to creating infrastructure that is of better quality than China’s. Japan, moreover, is seen to spurn collusion with dictators, underbidding, bribery and producing lower quality products as Chinese firms are perceived to do.

The recent downturn in China’s stock market could, however, dampen Beijing’s efforts in Africa. Beijing will first need to get the domestic situation under control. It would be hard-pressed, if it can at all, to continue to inject finance into Africa at a time when it has lost close to $3 trillion in stock value and its foreign exchange holdings are rapidly depleting. If Africa does diminish in Beijing’s list of issues to control, countries such as Zimbabwe, which are heavily dependent upon Chinese funding, could easily founder. This could lead to civil strife and violence. In this case, Robert Mugabe, long an outspoken opponent of the West, has had to swallow his pride and call on it for help. Other African dictatorships are not far behind.

China, too, is not immune to risk. If it neglects Africa, it stands a good chance of losing its influence there, especially among the dictators and autocrats it has cultivated. The immediate danger it faces is in being seen as having lost to Japan, which isn’t something that Beijing can afford. If President Xi is seen as losing to Abe, no matter that it is in distant Africa, it would further reduce his authority, which was already dented by the stock market slump. This could only add to the perception of non-accomplishment that his meeting with U.S. President Obama in Washington has engendered and make him an even more dangerous person, one who begins to feel increasingly required to produce concrete results.

Japan also runs the risk of losing influence if China were to put its own troubles aside and attempt to shore up its dictator allies in Africa. If after doing this, China were to call on them to restrict their exports of, say, rare earth ore to Japan, they would have no reason not to comply with that request. If this were to happen, Abe runs the risk of being seen as a leader whose aggressive policies have failed in Africa and could cause Japan to fail because of his militarization of Japan, which many Japanese oppose.

All in all, the play between China and Japan in Africa could bring major risks to all three.