Economic Threats in an Interconnected World 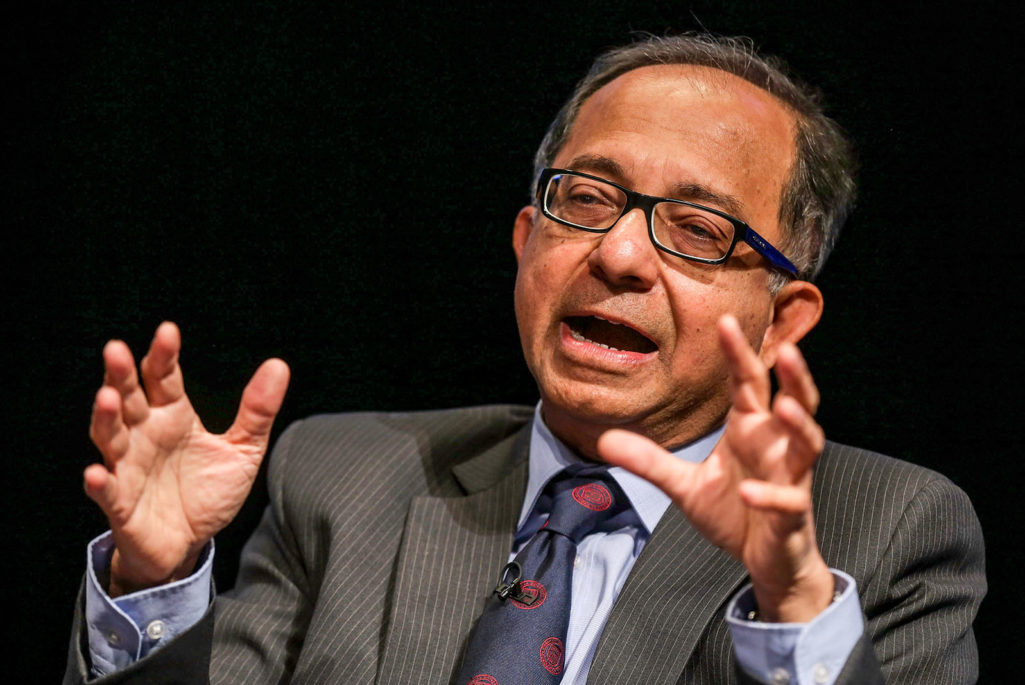 World Bank Group Chief Economist Kaushik Basu participates in a discussion about the bank's goal of reducing poverty in an unequal world economy at the World Bank Headquarters October 8, 2014 in Washington, DC. He also spoke at a recent NACD conference about global financial issues and governance.

“If you enact policy in one country, it may not have the same impact it once had, as borders are porous and money and capital injected into one economy flows into another economy,” Basu said during his keynote address to the National Association of Corporate Directors’ Global Board Leaders Summit in Washington last week. “And this is changing the landscape of policymaking in a very important way.”

Before the meeting, Basu warned that a rate hike might have triggered “some panic and turmoil” as capital fled some emerging market economies for the U.S. In his remarks last week, he also suggested a hike would not be as effective domestically. With Europe, Japan and other major central banks currently loosening their monetary policy, a tightening by the U.S. might cause a smaller interest rate move than intended “because money flows from one region to another, especially among rich countries.”

The main impact of a rate hike, Basu added, would have been a strengthening dollar, which would hurt U.S. exporters as well as the emerging-market countries that export to the U.S. In an Indian newspaper in early September, Basu observed that moves by individual central banks are less effective in a globalized world, adding, “there is a need for international institutions that can help coordinate monetary policy across economies, at least the major ones.”

Emerging Markets and the ‘Long Stagnation’

Basu said the world was in the seventh year of what he called the “Long Stagnation,” which he blamed in part on global over-borrowing. He noted that the 2008 financial crisis exposed powerful fault lines in the world economy, notably in Europe, where investors realized “it’s possible to have a single country default within the monetary union.” Rates on bonds issued by Greece and Ireland started to rise at about the time the Lehman Brothers investment bank declared bankruptcy, Basu noted. He urged European banks to unite under a “common resolution mechanism” and for European states to “put their fiscal house in order.”

One bright spot is India, which the World Bank expects to achieve a 7.5 percent growth rate for 2015.

Emerging markets have still not recovered from the crisis, Basu noted. The so-called BRICS countries—Brazil, Russia, India, China and South Africa—were once touted as the world’s next economic powerhouses. But Brazil, Russia and South Africa experienced negative growth last quarter. One major reason is the decline in major commodity prices over the last few years. Oil prices “will remain low for some time,” Basu predicted, thanks to the low cost of shale oil production in the U.S. and the eventual entrance of Iranian oil into world markets.

Meanwhile, China is in the midst of a slowdown. A steep decline in China’s growth will have “huge implications” for the world economy, Basu said. Chinese officials must tolerate “slightly slower growth” as they reduce spending to rein in the country’s massive debt. “Hopefully what will happen is a smooth landing from the phenomenal high growth of 10, 11 percent. If it can come down to 6 percent and hold steady, it will be well-achieved.”

One bright spot is India, which the Bank expects to achieve a 7.5 percent growth rate for 2015. Basu—formerly an economic advisor to the Indian government—cited pending taxation reforms. “If [India] can keep up a growth rate of 7.5, 8 percent in the medium term, it’s going to look like a very different country in the future,” he said.

Basu also had high hopes for Africa, where he said growth rates are improving thanks to improvements in governance. But the “interplay” with China—a major investor and trade partner—will play an important role in Africa’s future, Basu said. A Chinese collapse will have a direct impact on Africa, but the growing cost of Chinese labor prevents an opportunity for Africa—and to some degree India—in labor-intensive manufacturing.

Extreme poverty—which is most concentrated in sub-Saharan Africa and India—has been declining worldwide since 1995, he added. The World Bank expects it to continue declining for “a couple of years.” But then it could stall due to the effects of climate change, and extreme poverty could become entrenched in commodity exporters and “fragile and conflict-ridden” countries.

Basu’s forecast was reinforced this week by the latest release from the Brookings Institution-Financial Times tracking index. The index found sharp divergences in the performance of advanced and emerging markets, with Brazil and Russia mired in recession but India emerging as a bright spot, according to the Financial Times.