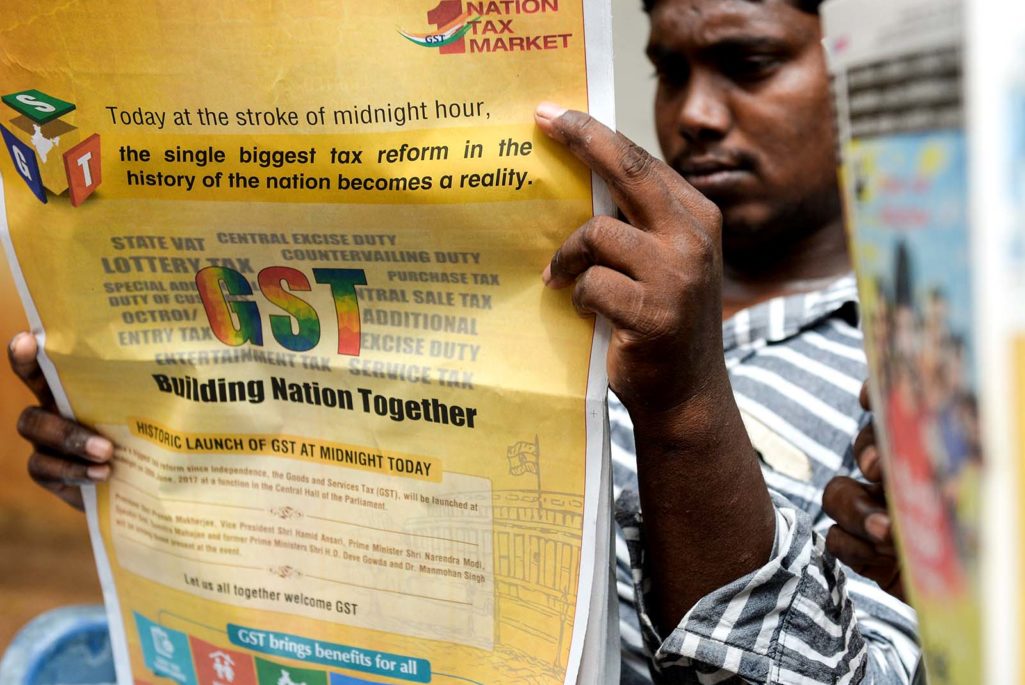 An Indian man reads up about the new Goods and Services Tax (GST) at a shop in Chennai on June 30, 2017. India implemented its most significant tax reform, as the world's fastest growing major economy was unified into a single market for the first time with the introduction of the GST on July 1.

India has finally done it. Through forceful tenacity, the biggest tax reform of the country was implemented on July 1, 2017, and is expected to have an impact on 1.25 billion Indians.

Conceptually, the Goods and Services Tax (GST), a destination-based tax on consumption of goods and services, is the same around the world. The reform has been a long time coming in India, and there have been several arguments put forth both in favor and those that point out to the various challenges that have cropped up as a result of it. In the Indian context, its primary benefits would be the following:

Raising the iceberg. Bringing small- and medium-sized enterprises (SMEs) into the formal economy through recognition of their existence as taxable entities. What Aadhaar did for individuals, GST will do for businesses. According to our internal estimates, it is expected to augment India’s GDP by 0.8 percent to 1 percent over the next 2-3 years. The enlarged tax base should improve central and state fiscal budgets, thereby nudging the country towards a credit upgrade.

Financial inclusion. Forcing SMEs to maintain proper business accounts would allow them to seek formal bank finance for expansion and growth. This will create a pipeline for future initial public offerings (IPOs) and deepen India’s equity and debt markets.

Employment/ entrepreneurship. Given the complexity of the GST framework and its technology platform, SMEs will have to either hire or outsource the function of engaging or  complying with new regulations. They would be required to adopt one of the many mushrooming GST automation solutions, not just for accurate bookkeeping but also for filing monthly tax returns. This will open up tremendous opportunities for young, tech-savvy, computer-literate graduates.

Technology adoption. It is expected that more than 8 million SMEs will ride the evolutionary trajectory of engaging the government electronically. The GST Network (GSTN) is a technology platform that is expected to process 3.5 billion invoices every month.

Stemming revenue leakage. The direct tax payments to banks will greatly reduce the incidence of corruption. It will eliminate the current misallocation of resources by businesses for tax avoidance. That, in turn, would improve corporate bottom line and hopefully also reduce the overall prices of goods and services for consumers.

Transparency. Real-time transactional data will give precise and reliable insights into the health of the Indian economy continually. The government has identified 1,211 goods and services for taxation, with the majority attracting 18 percent or less tax.

Simplification and single seamless market. This is the obvious and most-flaunted benefit of removing barriers to free movement of goods and services throughout the country. The GST has subsumed 17 central and state taxes and 23 assorted cesses at last count.

The aftermath of the GST implementation will be unsettling for a vast number of India’s citizens.

Yet, GST entails a meaningful change, not just in process, but also behavior and attitudes of entrepreneurs and small businesspeople. The small businesses that have historically never paid tax will get drawn into the dragnet. The scores of middlemen and corrupt officials who have now been disintermediated will either have to get used to reduced income or find alternative means of supporting their lifestyles. Therefore, the next few months, in the aftermath of the GST implementation, will be unsettling for a vast number of people. Even the honest will suffer the disruption until a new working equilibrium is found.

The GST implementation is not without its share of practical problems. Every country that has implemented GST or its equivalent in recent times—such as Malaysia, Brazil and Hong Kong—has had to endure teething issues. With India, the scale of the exercise adds a greater degree of complexity. The main challenges are the following:

The applicable rate. Given the tiered slab structure, there continues to be a degree of confusion about the applicable tax rate for each specific good and service. The multiplicity of rates is not a problem per se, since many countries have been successfully managing such structures (see table). It is useful to manage the inflationary impact on the essential goods in the consumer price index (CPI) basket through differential pricing.

Technology readiness. The GST Network is an e-enabled platform designed to function with minimal human intervention; however, a large number of SMEs are still scrambling to make the transition. If they choose not to participate, they will be, in effect, absorbing the taxes paid by their raw material suppliers without the ability to pass on the input tax credit along the value chain. This would dent their profitability.

Exclusion of alcohol and oil/petrol. This gives the states the freedom to charge higher tax rates to preserve state revenues. The downside is that downstream users of the alcohol and oil product category are not able to get the advantage of input tax credit.

Administrative intensity. While at present, businesses are required to file a single return under value-added tax (VAT) or a half-yearly return under services tax, under GST, they are expected to file three returns on a monthly basis: GSTR-1, GSTR-2 and GSTR-3, and an annual one, aggregating to 37 returns in all. The GSTR-2 and 3 are merely auto-populated from the data received from the counter-party of the first return (GSTR-1), yet the optics of filing extra returns on a monthly basis has caused some consternation. Of course, for businesses that operate in, say, 10 Indian states, they will have to file 37 returns per state per year.

Unpopular tax rates. There are  unpopular taxes on specific items such as pencils, math instruments, sanitary napkins and the like.

Anti-profiteering. Under this clause, businesses are required to pass on any tax cuts to the customer in entirety. While this will not be an issue with services invoicing, it could be an issue with products when the maximum retail price (MRP) varies with seasonal or cyclical factors. Segregating the impact of GST from these other factors would pose a practical hurdle.

There is also a logistical challenge to the implementation of GST. To date, all 31 states have not passed the state GST acts. Some key states, such as West Bengal and Punjab, have yet to pass the GST bill. There is also likely to be a snag regarding the payment of service tax. Currently, service tax comes under the purview of the center. In the GST regime, it will come under the single GST umbrella, therefore all intrastate services will be subject to state GST, while interstate provision of service will be subject to central GST. For an intangible delivery of services, this is likely to lead to unnecessary complications.

That said, it hasn’t been even a month since the GST came into effect, and it will be a while before one can determine how efficient or successful the reform eventually turns out to be or not to be.