Possible TPP Failure: What are the Implications for Asia? 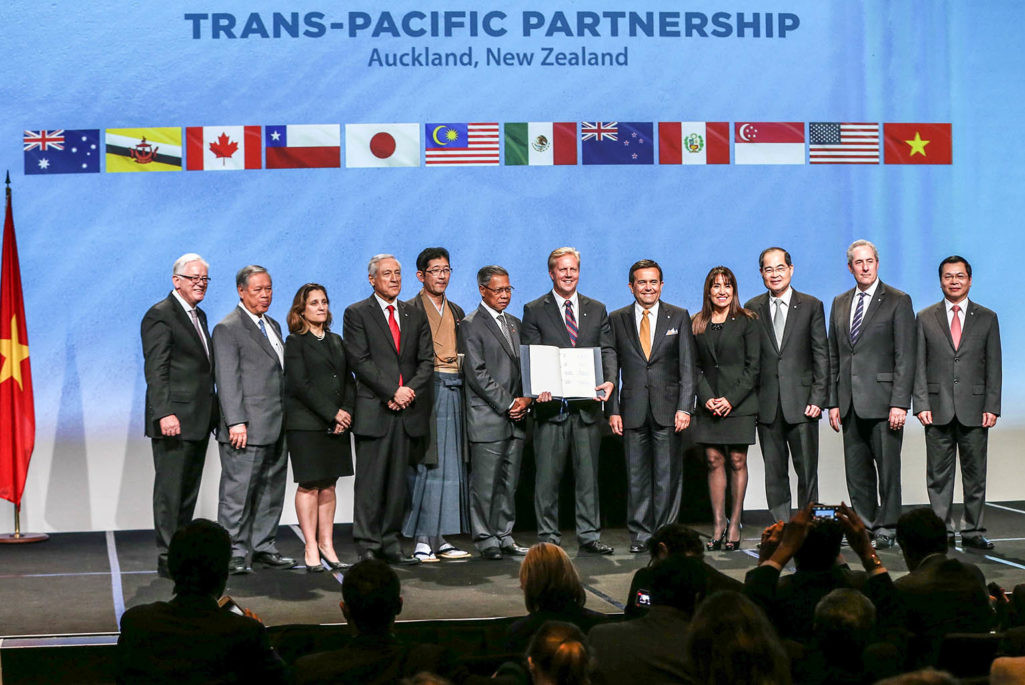 New Zealand Prime Minister John Key (6R) and Ministerial Representatives from 12 countries pose for a photo after signing the Trans-Pacific Partnership agreement in Auckland on February 4, 2016.

While Donald Trump’s election victory took many countries by surprise, his campaign promise to walk away from the Trans-Pacific Partnership (TPP) sent particularly strong shockwaves throughout the Asia-Pacific.

If President-elect Trump follows through on the promises he made in a speech describing first-100-day policy actions, the U.S. could drop out of the TPP by mid-2017 or earlier. But there are some optimists who insist that such extreme trade policies are not going to be implemented and that the Republican Party has a track record of endorsing trade deals.

At this point in time, no one can predict with clarity what the future trajectory of the TPP will be. However, it is useful to have a quick look at the implications of a collapsing TPP on Asia. On the surface, abandoning the TPP may not impose any tangible loss to the U.S. or other contracting parties because the TPP is yet to come into effect and few enterprises have factored in the potential deal when making important investment decisions. Closer scrutiny, however, reveals that if the TPP eventually falls through, many Asian countries will be affected.

The TPP is a free-trade deal negotiated between the U.S. and 11 other Pacific Rim economies. According to an updated analysis by Peterson Institute, the TPP agreement, if fully implemented, would confer large, real economic gains to Vietnam, Malaysia and Brunei, estimated at 8.1, 7.6 and 5.9 percent of GDP respectively. The envisaged economic impact of the TPP is staggering even if one takes into account the typically fast growth rate of dynamic Asian economies. Accordingly, scrapping the TPP deal will represent a missed opportunity for Asian signatories to bank on the large business opportunities that could have been unleashed by their privileged open trade relations with the U.S. (and with Japan, for that matter) that come with the TPP.

Moreover, countries such as Japan and Vietnam, which hoped to lock in domestic economic restructuring by binding themselves to the TPP obligations, will have to resort to other means to push back domestic opposition to those reforms. Alternatively, previously excluded countries can engage in international commerce on a level playing field should the trade-diverting TPP stall.

With the TPP at risk, Asian countries—some of which were arguably half-hearted RCEPers supporters before the U.S. election—have now geared up their commitments to concluding the RCEP. For example, Japanese Prime Minister Shinzo Abe asserted that “[t]here’s no doubt that there will be a pivot to the RCEP if the TPP doesn’t go forward.” Japan also set up a ministerial committee on 16 November in an attempt to seal a comprehensive free trade agreement with the European Union by year-end. The Australian foreign affairs minister, Julie Bishop, likewise argued that if the TPP fails, “then the vacuum that would be created is most likely to be filled by RCEP.”

The collapse of the TPP will halt the American “rebalance Asia” strategy.

Pivot to China and the RCEP?

The political ramifications of this collective “pivot to RCEP” are far-reaching, complex and manifold. First, the collapse of the TPP will halt the American “rebalance Asia” strategy, reshaping the economic and strategic landscape in Asia. The fate of the TPP— fraught with setbacks and frustrations—not only calls into question ability of the U.S. to conclude future trade accords, but, more importantly, raises the fundamental question about whether an inward-looking U.S. will be able to provide the sort of credible and consistent leadership that Asia needs more than ever.

Many Asian countries that would have wished to align (or ally) with the U.S. now have to adapt to the new reality by being more receptive to Chinese leadership as they “pivot to RCEP” (read: pivot to China). In this regard, it is no coincidence that Malaysia supported the China-backed RCEP at a time when Malaysian Prime Minister Najib Razak hailed China as a “true friend and strategic partner.” And as the RCEP gains traction, the “domino effect” will ensure that more Asian countries will be assimilated into China’s sphere of influence.

Second, the TPP debacle would serve to substantiate the lingering perception that forging free-trade agreements, when tariff barriers are already low on average, is not the appropriate prescription for stimulating underperforming global and regional economies.

According to a recent survey of 648 Asian opinion leaders based in 40 countries conducted by myself and colleagues, 61 percent of respondents felt that China’s One Belt One Road Initiative and Asian Infrastructure Investment Bank, which both aim to promote cross-border commerce via creating new routes and slashing logistical impediments, are more relevant than the TPP.

Therefore, the TPP’s potential derailment will generate momentum for a plethora of other China-led economic initiatives. Ironically, the likely demise of the TPP could do as much to cement a China-centric regional economic architecture, in parallel to the Bretton Woods institutions.

Third, from ASEAN’s perspective, the failing TPP could have a political upside. Previously, ASEAN centrality was tested when four of its members negotiated the TPP alone. With the rebalance to RCEP, ASEAN’s linchpin role in Southeast Asian regionalism would be restored and even strengthened as ASEAN takes part in RCEP en bloc. Moreover, the RCEP, which would consolidate production sharing networks and supply chains, complements and synergizes with ASEAN’s existing regional integration schemes such as the ASEAN Economic Community and AEC Blueprint 2025.

Finally, there is a legal dimension to the strategic calculus behind the TPP. Through introducing WTO-extra and WTO-plus rules in such issue areas as e-commerce, public procurement, and competition and regulatory coherence, the TPP was counted on by negotiating parties to write the “rules of the road” for 21st century trade. The same can be said about the less stringent RCEP. Indeed, the TPP and RCEP have been framed as two competing pathways to reaching an all-encompassing Free Trade Area of the Asia Pacific (FTAAP).

In the absence of the TPP, the RCEP unambiguously becomes the default path to freer trade in the Asia Pacific. Establishing the FTAAP by multilateralizing the RCEP probably entails that countries on the other side of the Pacific (including the U.S.) have to play by Asia-prescribed rules should they want to join what is on course to become the world’s largest free-trade area.

Much like its eye-catching inception, the seemingly imminent failure of the TPP will have profound implications for Asia. Now Asian states have to dwell on how they can make the best out of the TPP’s final outcome (and of the new U.S. administration that makes the call), while contributing to the long-term stability and prosperity of the region.