Australia’s Fires May Cause Record-Setting Damage to Its Economy 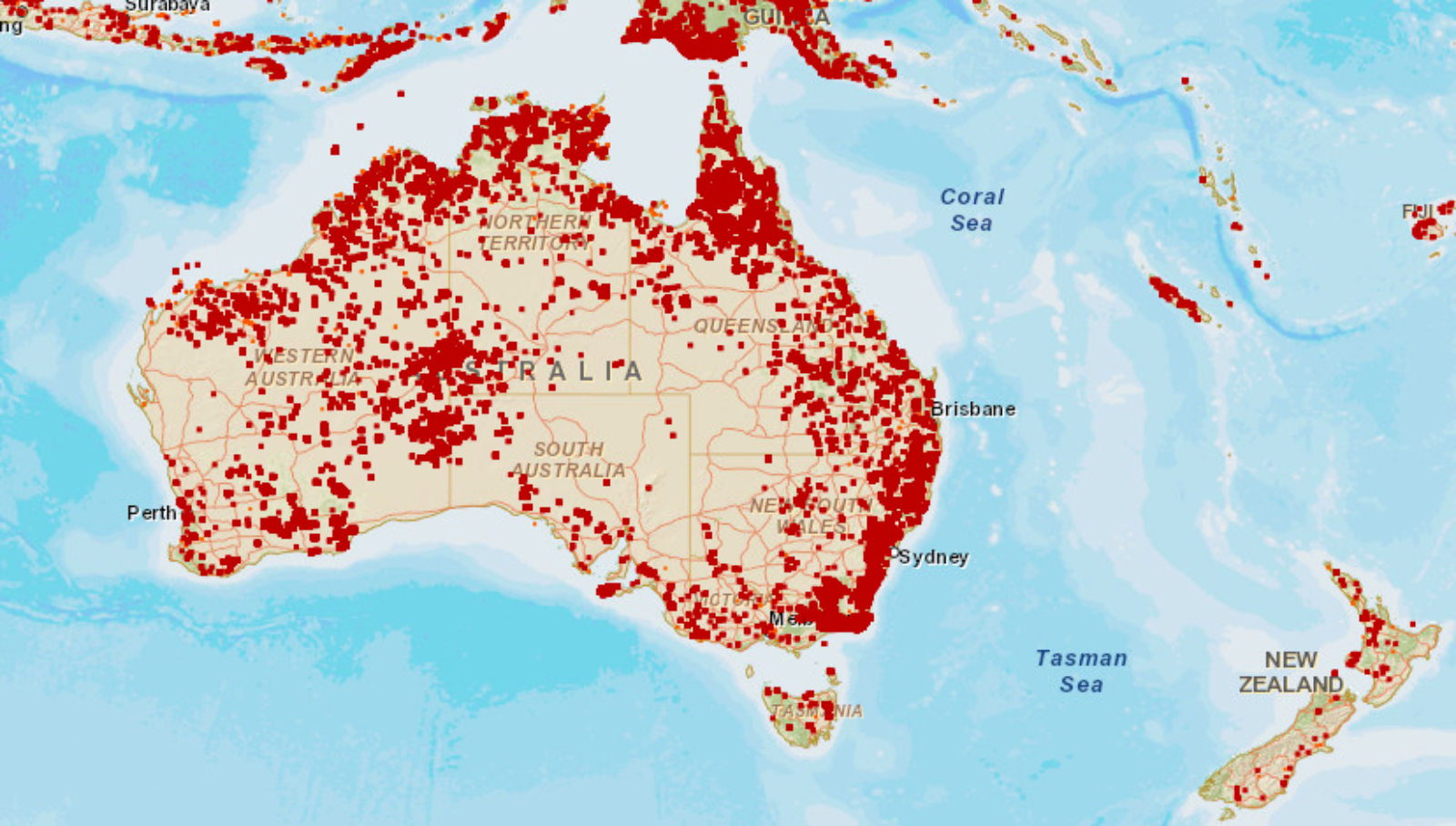 While some sources estimate the damage to be around $280 million, the Insurance Council of Australia estimates “damage claims from the fires to [be] more than AU$700 million [$480 million], with claims expected to jump when more fire-hit areas are accessible,” according to Reuters, which adds that “insurers have received 8,985 bushfire-related claims since November 8.”

The economic damage on Australia’s eastern seaboard is “likely to exceed the record $4.4 billion set by 2009’s Black Saturday blazes,” according to economist Katrina Ell in The Guardian. Air pollution and “direct harm to industries such as farming and tourism,” will significantly damage the economy, the article cites, with “tourism bodies say[ing] it will cost hundreds of millions of dollars to rebuild.” 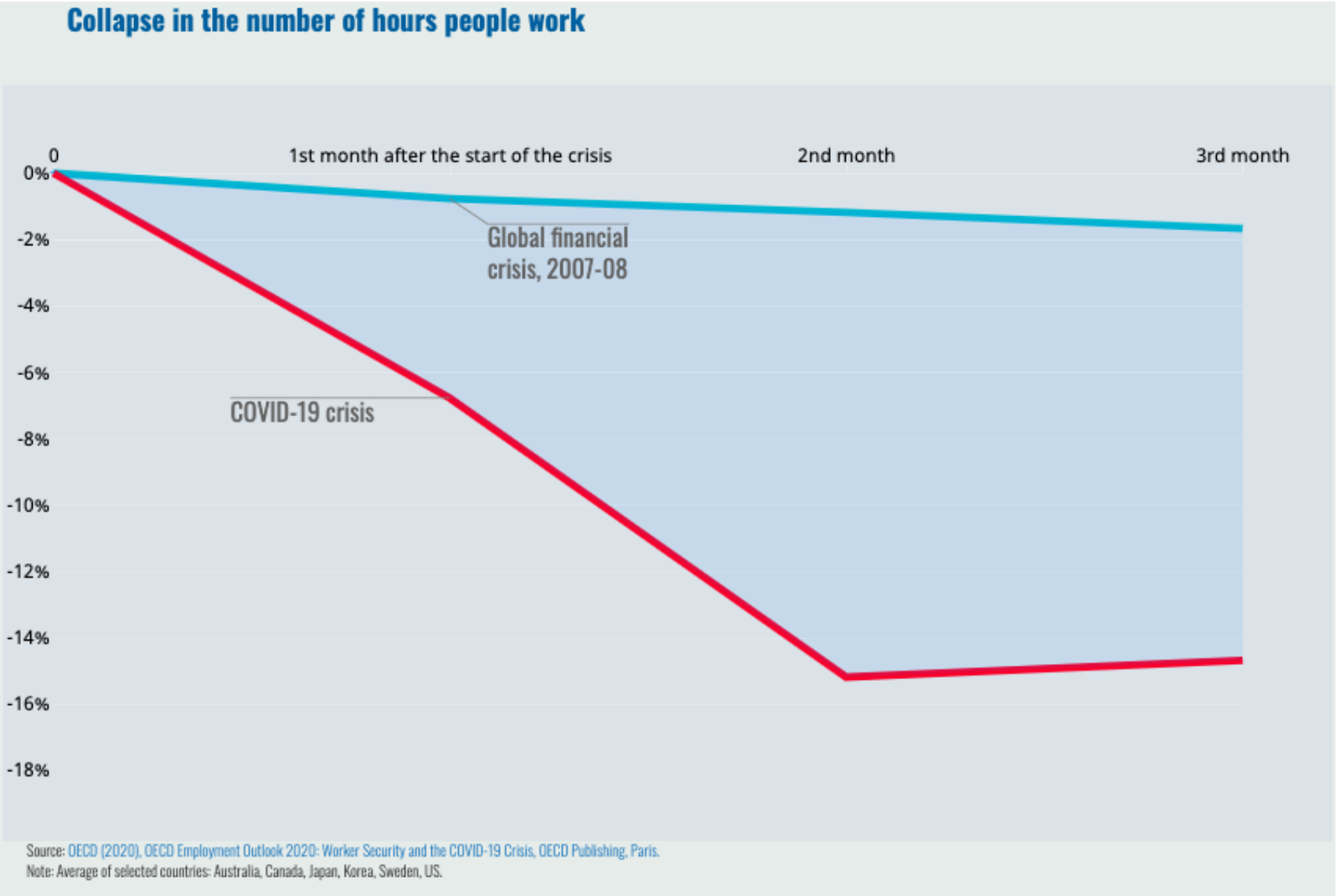 The impact of job hours lost during the coronavirus pandemic is already 10 times greater compared to the early months of the 2008 Great Recession. The economy is not expected to bounce back to its pre-pandemic levels until after 2021, according to the OECD.

COVID-19 has seen a steeper rise in unemployment and a broader reach among the population compared to the Great Recession. The Great Recession reached its unemployment peak in January 2010 at 10.6% — a rate that we surpassed in May 2020 at 13.0% (and it’s still rising). Almost every age group has been economically affected by the COVID-19 outbreak, while during the Great Recession, parts of the older generations were relatively more insulated from the economic fallout.

This drastic job loss could further expand the poverty-wealth gap and backtrack both progress toward gender equality and the ability of younger generations to be financially independent, purchase a home or pay off student loans. The effects of unemployment on mental health are substantial as well and will likely continue increasing during this crisis.

Most US Adults Believe Pressure Led to Corporate Statements About Race 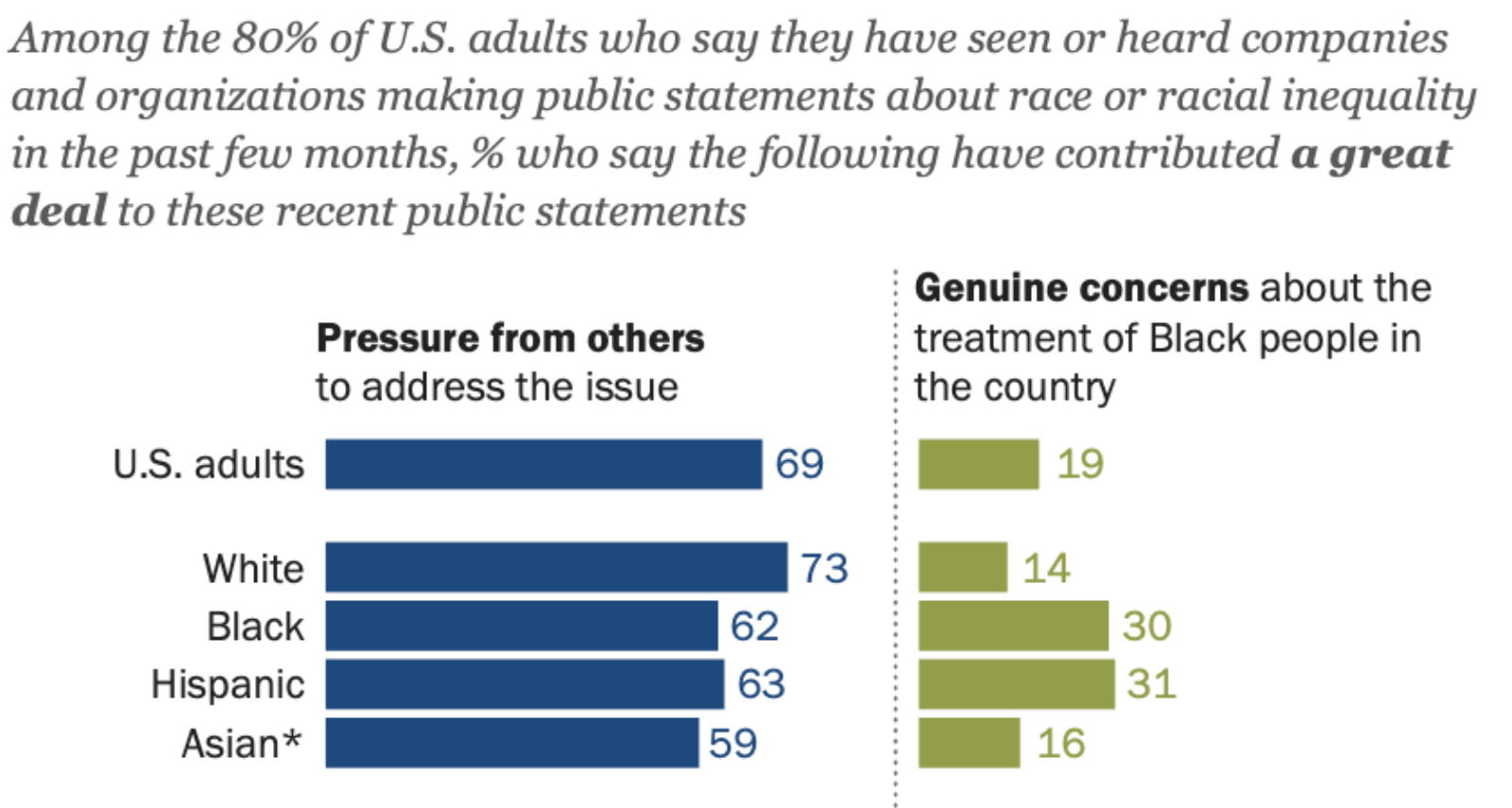 Note: Across racial, ethnic groups, more see pressure rather than genuine concern as contributing a great deal to companies’ statements about race.

In making these statements, a mirror has been held up to companies’ own internal diversity, equity and inclusion (DEI) efforts, as well as their actions of support for marginalized communities local to their area.

Without their own DEI initiatives, intentional recruitment, diverse leadership, pay equity reviews, or external action to support statements about the imperative of racial justice, for example, these companies may be criticized for empty virtue signaling. The majority of consumers want to know where companies stand on certain issues, but they also need to see how companies exemplify their own purported beliefs.

New Tool by NASA Brings Clarity to the 2020 Wildfire Season 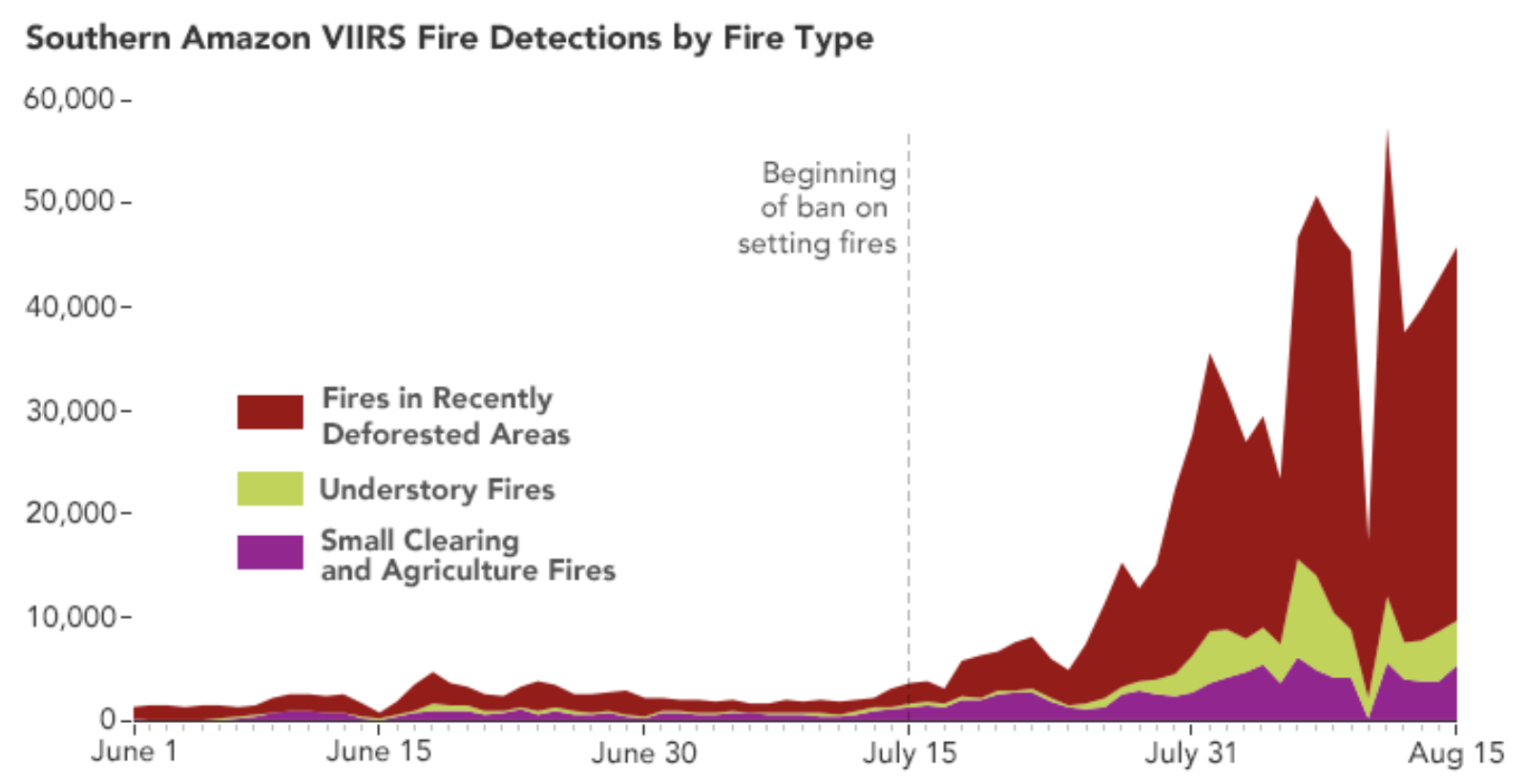 There has been a surge in wildfire activity this year throughout the southern Amazon states of Pará, Mato Grosso and Amazonas in areas where there was already extensive deforestation. A new tool by NASA tracks the fires and distinguishes between the most damaging types of fires: deforestation and understory fires.

NASA released this satellite-driven, web-based tool on August 19, right before the peak of wildfire season in September and October. The tool accounts for fire location, intensity, duration and spread rate. “By providing more information about fire types and locations in real time, we hope this dashboard will give decision-makers better information needed to manage and respond to fires,” says Douglas Morton of NASA.

Scientists are monitoring this season closely because of early warning signs, like the growth of fire activity last year, a gradual rise in deforestation and a much drier season. The Amazon has already seen a 17% rise in fires compared to last year — with over 10,000 fires in the first 10 days of August 2020. 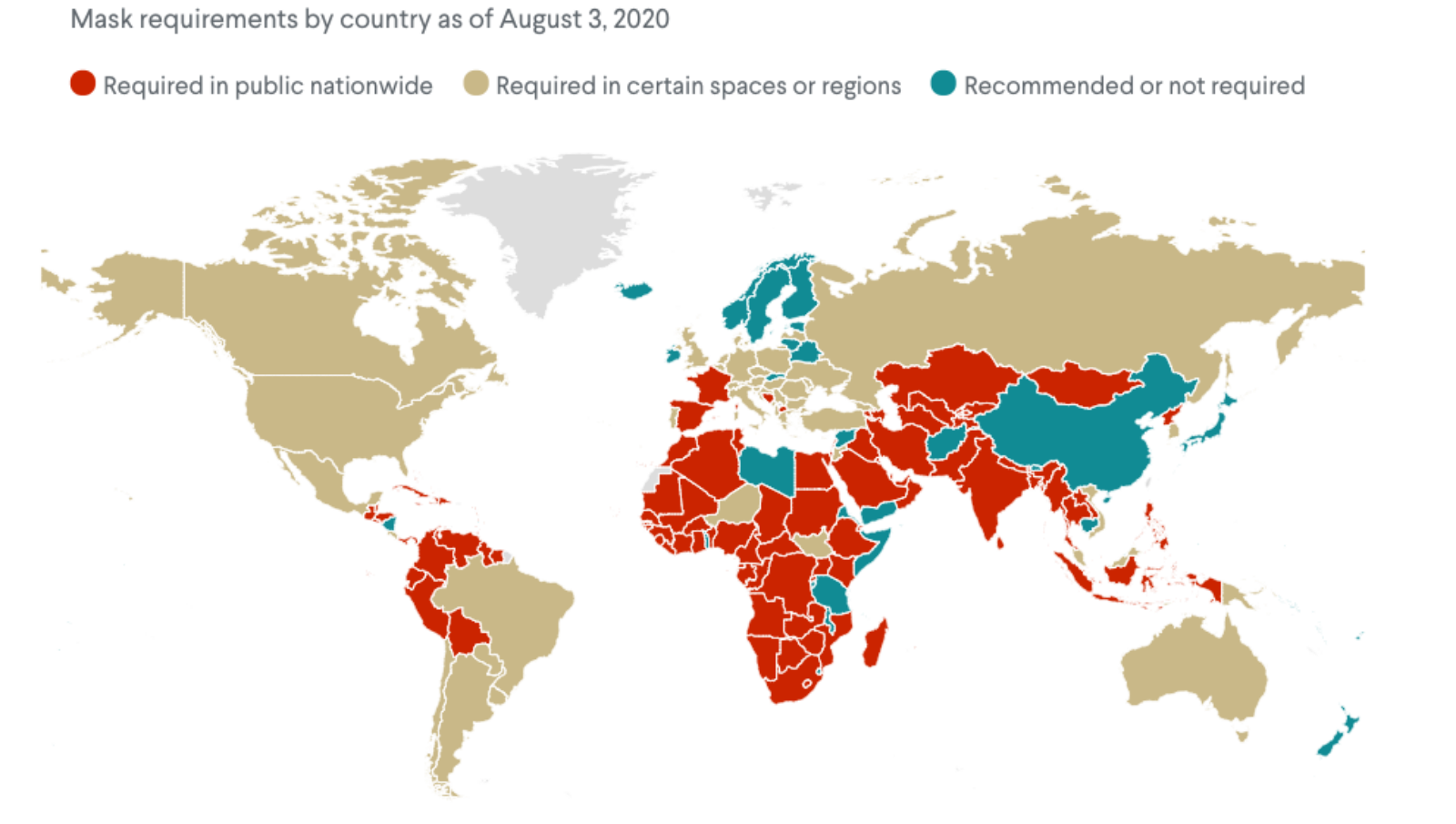 More than half of the world’s countries are mandating the use of face masks while in public spaces to prevent the spread of coronavirus. The Council on Foreign Relations found that, without a national mask mandate, large percentages of populations neglect wearing a mask.

The first two countries to issue a nationwide mask mandate were Vietnam and the Czech Republic in mid-March. The Czech Republic has a 1.8% COVID-19 fatality rate and a 74.2% recovery rate, while Vietnam has a 2.8% fatality rate and a 61.5% recovery rate. More than half of the 50 states in the United States have enforced statewide mask mandates — but there is no federal mask mandate. The U.S. is experiencing a lower number of new cases lately but is still leading globally with over five millions cases, followed by Brazil — which also does not have a federal mandate.