Ripples of COVID-19: What Concerns Business Leaders for the Decade to Come? 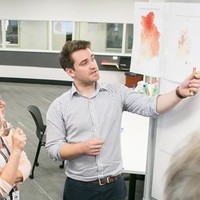 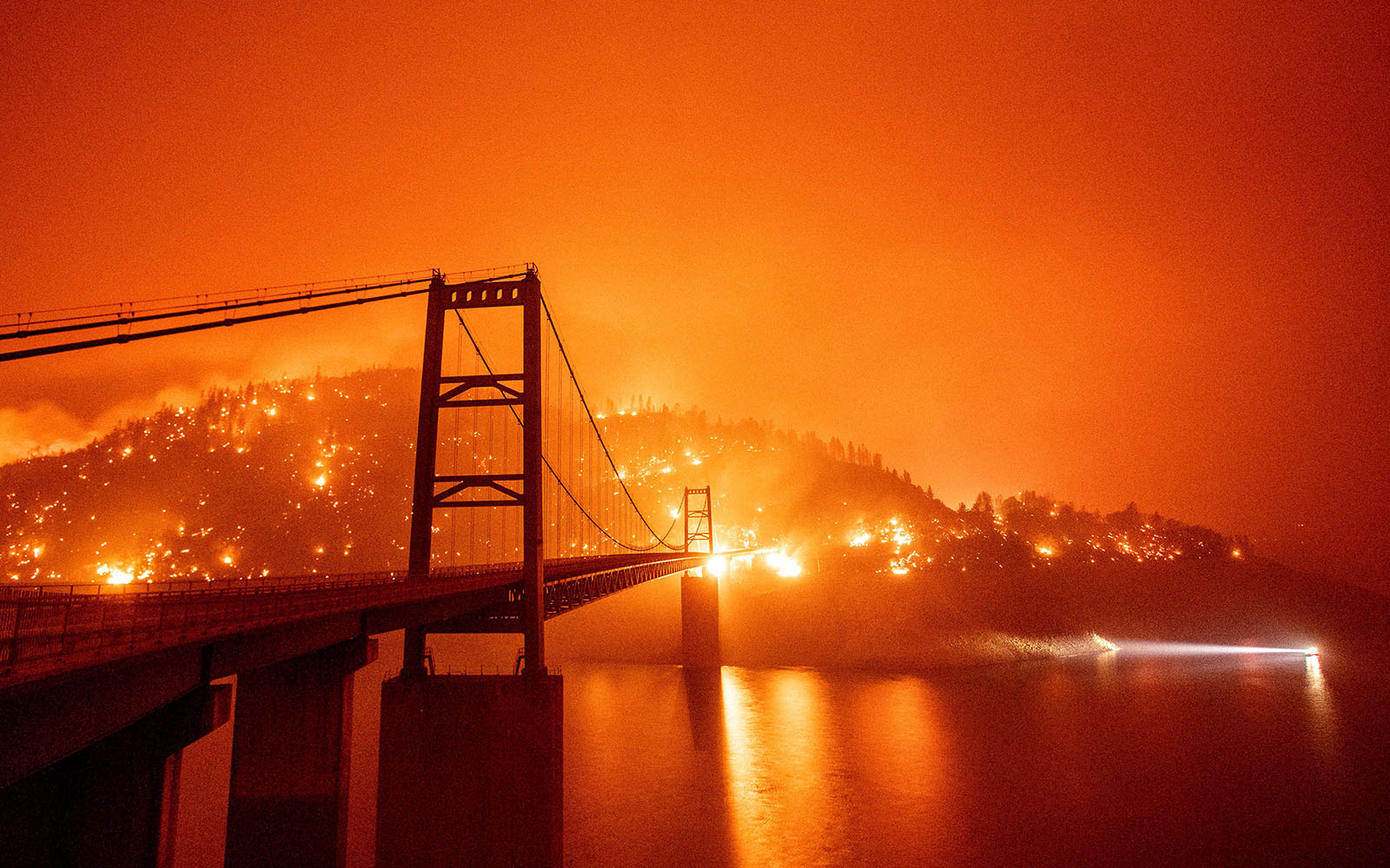 A wildfire in Oroville, California on September 9, 2020. Environmental concerns are gaining traction among businesses, with four environmental risks featuring in a new ranking of the top 20 global risks for the first time.

Unsurprisingly, 10 months into the COVID-19 crisis, with cases still rising and crippling effects to industries still playing out, “spread of infectious diseases” has rocketed up the rankings to become a top concern for businesses, according to the World Economic Forum’s 2020 Executive Opinion Survey (EOS).

The responses of over 12,000 executives across 127 countries reflect not just the current health crisis but also how the fallout may reverberate across economies and societies in the years to come, aggravating pre-existing vulnerabilities to a broad swath of global risks, inflaming already tense divides and surfacing secondary complications.

Although the top risks on a global level remain largely unchanged since last year, the same risks attain new significance in a COVID-19-impacted world. Economic risks such as “unemployment or underemployment” and “fiscal crisis” were cited by executives as among the top 10 risks across every region and globally ranked first and third, respectively.

The Global Top 10 Concerns for Doing Business in 2020 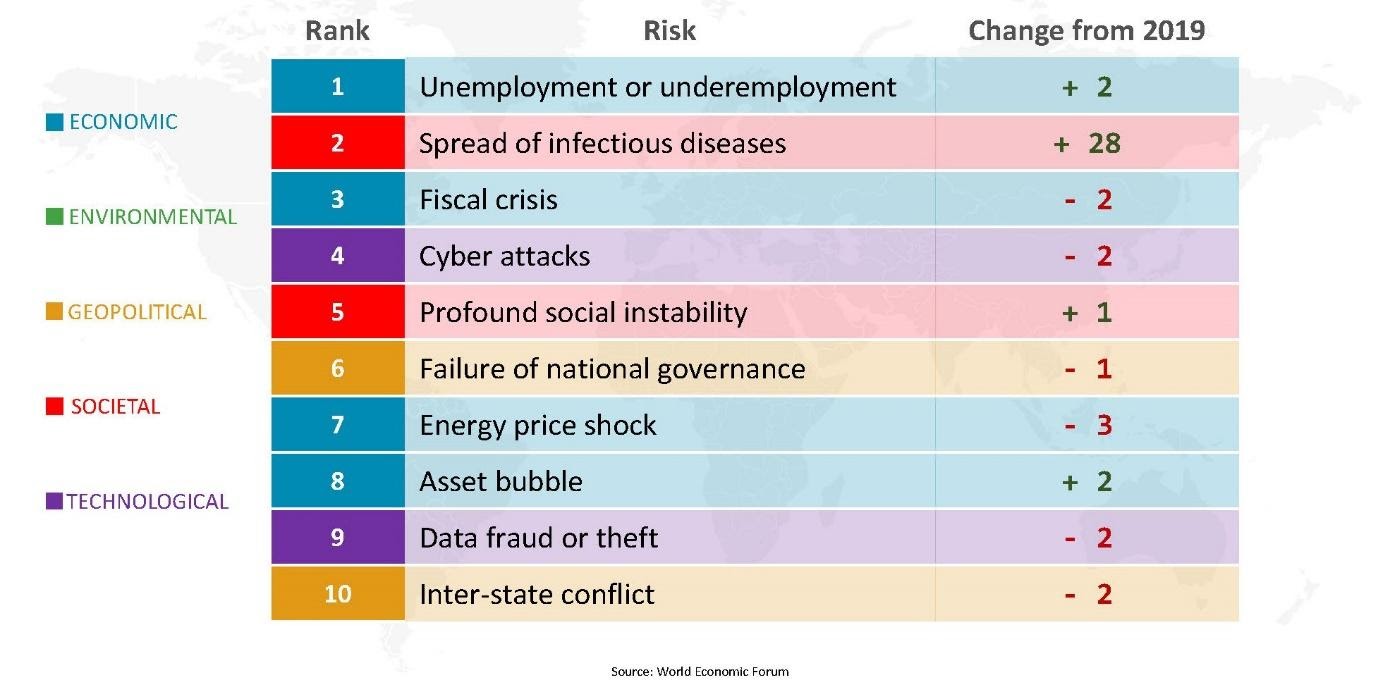 Unemployment continues to be emblematic of obstacles to growth for emerging markets and is now further hindered by stunted economic activity under the strain of COVID-19 and the necessary policy responses. However, among advanced economies, this is a fresh concern. Unemployment’s rise in advanced economies from No. 13 to No. 4 emphasises the fragility of past employment rates and the precarious nature of those jobs. A lack of job security has also led to millions losing access to medical benefits and insurance during the global pandemic, resulting in foregone preventative and early care interventions, which will inevitably increase health care costs in the future, while driving down productivity and income.

As unemployment pushes many into poverty, governments have faced immense pressure to respond with significant stimulus packages. The resulting fiscal strain has led to high levels of public and private debt and raised questions over the sustainability of quantitative easing programs. As countries move out of the immediacy of the COVID-19 health and economic crises, an opportunity to use the continuing fiscal stimulus to make more efficient markets, mitigate other critical priorities, like asset bubbles, and create more sustainable and resilient societies presents itself.

The pandemic is also forcing executives to pivot business models and operational practices in a physically distanced and digitally dependent world. Increasing reliance on digital infrastructure has reaffirmed the dangers of cyber threats to businesses globally, with added criticality. Risk of cyberattacks continues to be top of mind for business executives in advanced economies — among the top five for North America and Europe for the fourth year running — and rising rapidly up the ranks for business leaders in emerging markets (from 20 in 2016 to 10 this year). In sub-Saharan Africa, “cyberattacks” and “data fraud or theft” entered the top 10 risks at the regional level for the first time.

Reflecting the many recent and ongoing instances of protest and social unrest in the world, “profound social instability” appears as a rising concern for business leaders, ranked fifth in the 2020 survey. The risk featured among the top 10 risks in six of eight regions, with notably increasing recognition in more advanced economies — rising 10 places to ninth this year. While in 2019, social instability was a top five risk in countries accounting for 19% of global GDP, in 2020 the risk ranked in the top five in countries accounting for 46% of global GDP.

The pandemic has magnified systemic challenges related to access and inequality. Governments have struggled to ensure an equitable distribution of testing and treatment facilities, leading to disparate mortality rates and economic misery across different communities. As institutions and economic activities continue to move online, the technological divide in education and the workplace will similarly widen. Those who lack the necessary technologies or know-how are being left further behind, creating an ever-larger group of economically disadvantaged and often disenfranchised citizens, increasingly disillusioned with government, with the prospect of further civil unrest and violent extremism.

Emerging technologies continue to play an important role in this continued polarization of societies. Results from the 2020 survey suggest fresh concerns from business leaders toward the persistent spread of misinformation, the lack of effective regulation and the increasing deployment of surveillance tech by governments. Compared to 2019, “misuse of technology” rose five spots to rank 12th globally, featuring as a top 10 risk for executives in North America, the Middle East and North Africa, and South Asia.

These developments are fanning the flames of large-scale social dissent, insurgency and political turbulence. High levels of societal instability in parts of North America, Eurasia and Asia have already severely disrupted business operations and given rise to reputational harm. With consumers and employees expecting companies to be more engaged on social issues against a backdrop of considerable uncertainty regarding the direction of government policy, business leaders need to find a way forward that reflects the risks for political blowback, negative financial impacts and long-term damage to customer trust.

Environmental concerns are gaining traction among businesses, with four of the five environmental risks featuring in the top 20 global rankings for the first time. This trend is particularly pronounced in regions that recently faced significant disaster damages and might reasonably expect similar events in years to come.

Ranging from catastrophic bushfires in Australia to large-scale flooding in Jakarta in just the opening weeks of 2020, “extreme weather events” and “humanmade environmental catastrophes” have joined “natural catastrophes” among the leading concerns for executives in the East Asia and Pacific region. In North America, where wildfires continue to rage on the West Coast, the risk of “natural catastrophes” rose by six positions in North America to fourth, while “failure of climate change adaptation” remains in the top 10. The last also entered the top 10 of the EOS for the first time in Europe, a region that suffered from a series of storms early in 2020. 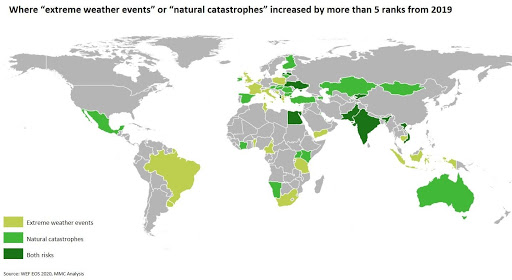 This year has shown that the impacts of COVID-19 in a complex risk environment can lead to cascading and compounding effects. Blind spots arise as risks are viewed in isolation, while the confluence of longer-term trends that culminate into the crisis may be overlooked.

For instance, although geopolitical risks slip under the radar in the survey this year, they continue to simmer. Border disputes, trade wars and heightened diplomatic tensions have persisted or have been exacerbated by COVID-19. Some have been used to distract from governmental shortcomings in response to the pandemic at home or initiated while the world was looking elsewhere. Such geopolitical risks have the potential to trigger widespread impacts, similar to COVID-19, and thus indirectly influence the global economy.

Businesses will be hard pressed to predict the exact cause or timing of the next crisis, but they can sharpen their understanding of vulnerabilities and interdependencies, from capital flows to physical supply chains, and develop management strategies that enable them to buffer the impacts of disruptions and adapt to a new normal.

Graeme Riddell is a research manager at Marsh McLennan Advantage. He has primary responsibility for managing the emerging risks theme including understanding country level resilience challenges and approaches, and enhancing company level risk management. Previously, he held a range of roles across academia and international development researching and consulting on strategic risk management and climate resilience.