When Disaster Strikes, Who Pays? 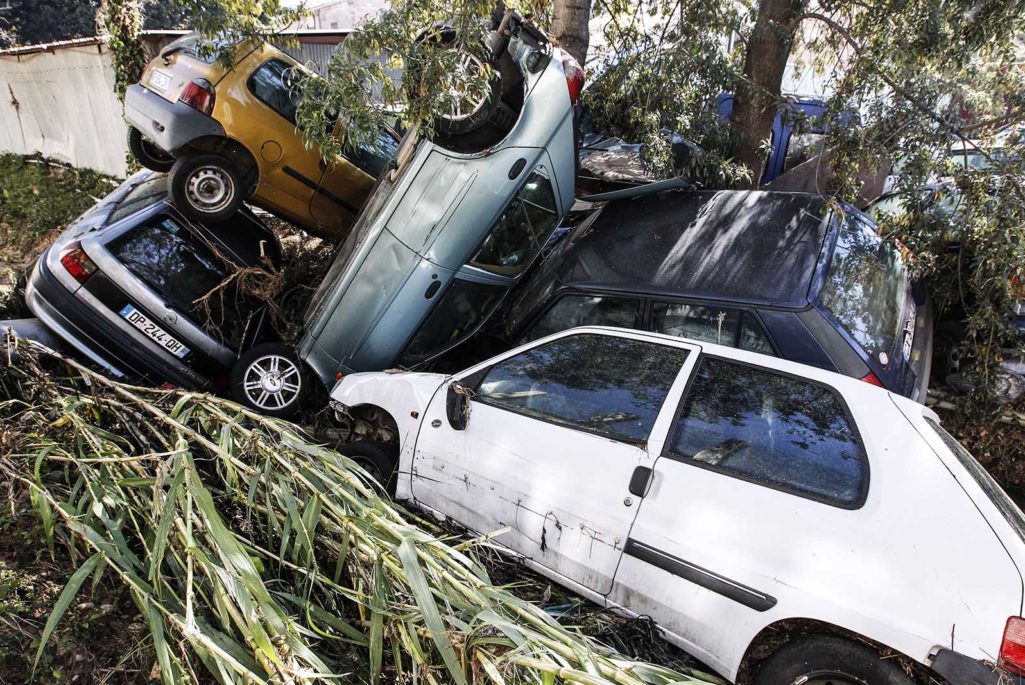 Damaged cars are piled atop one another after flooding in Cannes, southeastern France, on October 7, 2015. Volunteers and firefighters began the grueling task on October 5 of cleaning up French Riviera towns strewn with mud and debris.

If you feel like you’ve been reading more news about disasters in recent years, it’s no coincidence. Large-scale disasters are occurring with more frequency, with climate change playing a role: 87 percent of disasters were weather climate-related over the past 10 years, according to the UN. And the impact of any given disaster is growing: Population growth and urbanization has increased the concentration of people and infrastructure in disaster-prone areas, while global economic integration has widened geographic impacts.

The advanced economies of the OECD (Organization of Economic of Cooperation and Development) and the BRIC countries (Brazil, Russia, India and China) have suffered a combined $1.5 trillion in economic damages from natural and man-made disasters over the past decade. Some events—like the Canterbury earthquake in New Zealand in 2011, or the Chilean quake of 2010—caused damages in excess of 20 percent of national GDP. Disasters don’t just impact people’s lives; they also wreak serious havoc on public budgets. And these budgets are still reeling from a disaster of another sort: the financial crisis of 2008.

Picking Up the Pieces

The economic crisis took its toll across the OECD: As economies slowed, tax revenues declined and demands on the public safety net increased. As a result, government gross liabilities grew beyond 100 percent of GDP in 2011, and we expect them to stay above that level into the foreseeable future. Absorbing the costs of disasters will be more challenging in such a tight fiscal environment, especially in countries that rely largely on the government to pick up the pieces. (While private insurance coverage is generally higher in advanced economies, it still varies considerably. For example, about 56 percent of disaster losses [see Olivier Mahul,World Bank presentation in “Session 1”] are insured in the U.S., compared to about 30 percent of European losses.)

Governments find it hard to make financial plans for disasters, and that’s not just because disasters are unpredictable and outsized. It’s because post-disaster demands on governments are also unpredictable, driven by public and political pressure. It may not be enough to rebuild public infrastructure or fulfill explicit government guarantees such as unemployment insurance. Public officials may feel pressured to take over emergency disaster management functions that were supposed to be under state or local purview. Or they may end up compensating victims of an event in which the victims share some responsibility—say, by building their homes in a flood-prone area.

Acceding to these pressures creates “moral hazard,” as citizens and businesses increasingly expect the government to patch up every hole after disaster strikes. Some governments are managing those expectations by passing legislation that limits their liabilities. As Charlotte Benson, senior disaster risk management specialist for the Asian Development Bank, has noted, [see presentation in “Session 1”] Japan, India and Vietnam have set statutory levels of personal compensation in the event of a disaster. Turkey, for its part, relinquished its obligation to rebuild housing after setting up a residential earthquake insurance scheme in 2000.

Disaster costs are not easily incorporated into traditional public budgeting frameworks. Instead, governments need to make special financial planning arrangements that are coordinated with other levels of government and the private sector. Strategies include accumulating budgetary reserves, transferring sovereign risk (through mechanisms such as international risk pools or sovereign catastrophe bonds), insuring public assets and developing the domestic insurance market.

Disaster risk financing is just a part of disaster risk management, which includes risk identification, risk reduction (through measures such as land-use planning), preparedness and resilient recovery policies. But it is an important strategy for minimizing the critical risks to a country’s fiscal position. The OECD is working to help governments assess and finance their contingent liabilities in case of disaster.

Catherine Gamper is an Economist in the OECD’s Public Governance and Territorial Development Directorate. She is responsible for the OECD High Level Risk Forum’s work program on risk prevention and mitigation and contributes to the risk team’s work on risk management principles and risk management policy reviews.  Prior to joining the OECD she worked at the World Bank contributing to its research and operational work on disaster risk reduction and localizing development.

Tony Gallagher Regional CEO, Asia Pacific at Guy Carpenter
URL: https://www.brinknews.com/when-disaster-strikes-who-pays/
Get ahead in a rapidly changing world. Sign up for our daily newsletter. Subscribe
​​