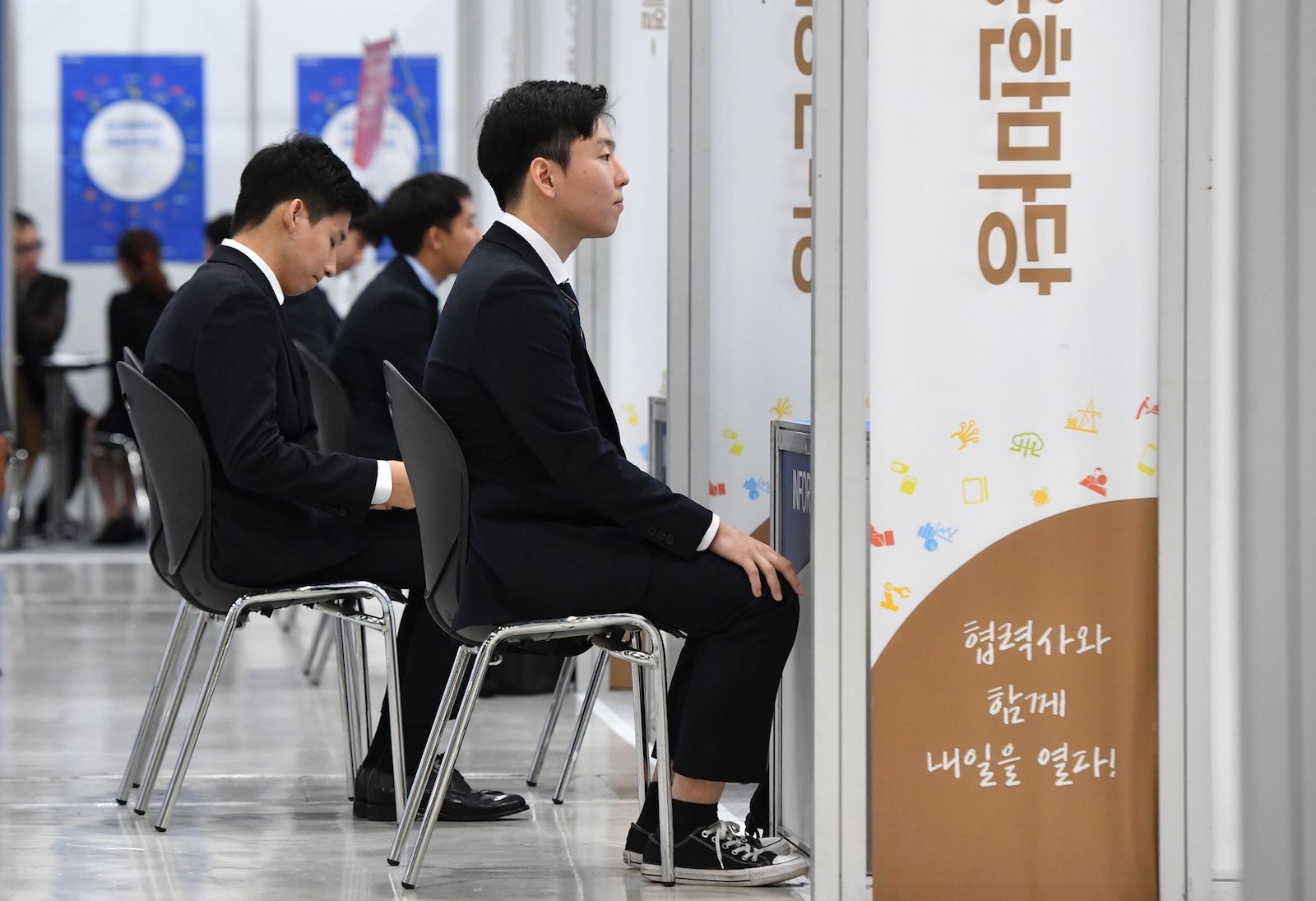 Job seekers attend interviews at a job fair in Seoul. South Korea's male-dominated corporate culture doesn't present equal opportunities for women in business, and the country has the highest share of companies globally with no women on boards.

This is the fourth article in a special series on women in the workforce.

Globally, women held only 17.9 percent of all directorships across corporate boards in 2018. According to a recent MSCI report, this was an increase from 17.3 percent in 2017—a meager increment, given that earlier projections suggested that the share of women in director roles would increase to 19.4 percent by 2018.

As of October 2018, 21.3 percent of the 2,694 MSCI ACWI Index companies still featured all-male boards—largely in Asian economies—and almost all had majority male boards. Notably, only 11 companies had boards that featured a female majority—up from seven in 2017; another 32 divided equally between men and women.

Although growth in the share of women on corporate boards has been slow, it continues to grow at a slower rate in Asia. The majority of companies whose boards had at least three female directors are primarily based in developed Western markets. In China’s case, the inclusion of companies in the China A-shares universe has led to a significant increase in the absolute numbers of women directorships—more so in the MSCI Emerging Markets Index.

Female representation at the CEO level has also proven to be slow, and there was a slight decline registered in 2018. “Of the 99 firms with a female CEO, 26 were American, with China (17), the UK (8) and Australia (6) accounting for much of the rest,” the report says. There were notable gains in total directorships held by women in several Asian countries, including Malaysia, Thailand, Singapore and China. However, there has been better progress in CFO positions with substantial progress seen in Thailand, Malaysia, Taiwan and China. In the case of developed markets, the proportion of companies with at least one female director registered noteworthy increases over the past year—from 59.6 percent in 2017 to 64 percent in 2018. This increase was particularly on account of Malaysia, which recorded an increase from 87.5 percent to 95.7 percent. A government mandate introduced earlier was instrumental in Malaysia’s strong push for increasing women’s representation on corporate boards. Likewise, India has reached the point where all MSCI ACWI Index companies have at least one female director. Both Malaysia and India see greater female representation on boards than the MSCI Emerging Markets Index total of 11.2 percent, with 21.9 percent for Malaysia and 14 percent in the case of India. Another MSCI Emerging Markets Index country in Asia that has made progress is Thailand (up to 87.9 percent of companies with at least one female director).

Asia Lags in Board Diversity

On the flip side, the opposite was true in Europe, where several countries no longer had any MSCI ACWI Index companies with completely male boards. In terms of women representation on corporate boards by sector, the financials sector had the highest proportion of companies with at least three women directors globally, at 41.4 percent. It overtook the utilities sector, which recorded a decline and fell to 36.6 percent. The financials sector was followed closely by the health care and telecommunications sectors at 37.9 percent and 37 percent of companies, respectively.

Exhibit 3: Sector Distribution of Companies with 3+ Women on Their Boards The trend in increased women boardroom representation has continued since 2015, albeit very slowly, with small YOY gains, reflecting slow growth in gender diversity at the board level globally.

While a few Asian countries have made more substantial progress in this regard, Asian boards are among the least inclusive globally, with the developed economies of South Korea and Japan performing most poorly. In the region, Australia and New Zealand fare better than other economies, with close to 30 percent of female directorships; while India and Malaysia have taken notable steps in addressing the disparity.

Progress in increasing the share of women on company boards is taking much longer than anticipated, with the report noting that it will be at least another decade before women occupy just 30 percent of seats on MSCI ACWI Index company boards.