A Way through the Dark: Pakistan’s Clean Energy Development Opportunity 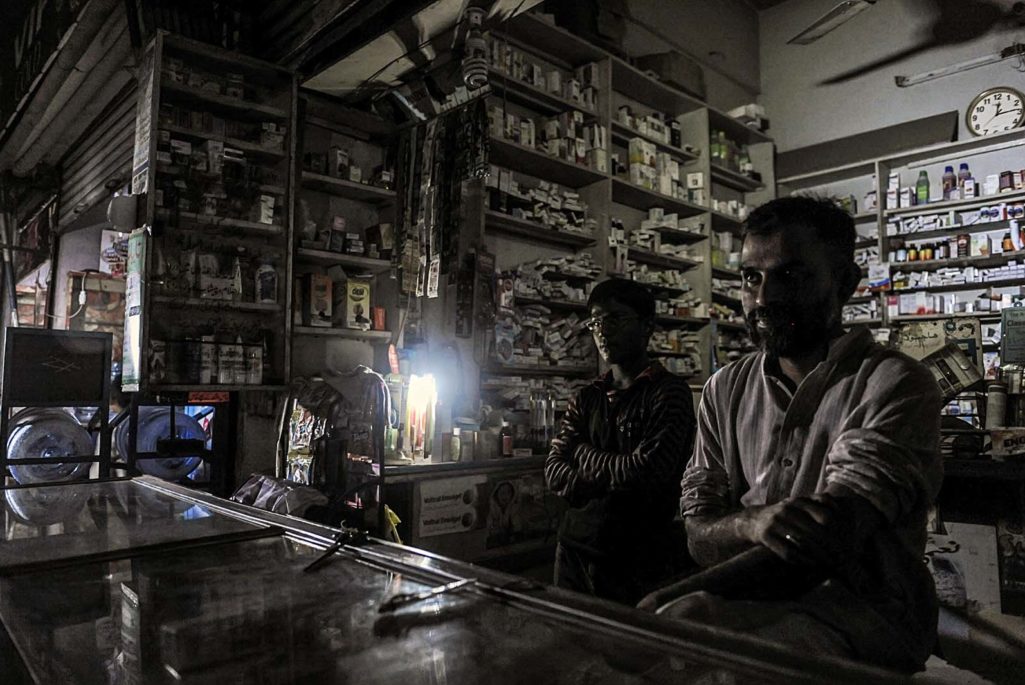 Pakistani vendors wait for customers in a dark shop during a power cut in Islamabad. India may lay claim to the largest blackout in history, but an endemic energy crisis blamed on years of mismanagement in Pakistan cripples the economy and makes millions of lives a daily misery.

In January 2015, Pakistan experienced one of its worst power outages when nearly 80 percent of its population (140 million people), its capital, Islamabad, and other major cities, were plunged into darkness for eight consecutive hours.

This catastrophic failure has been followed by blackouts lasting up to 16-20 hours in certain parts of the country. The resultant annual loss to the economy has been estimated at 2 to 2.5 percent of GDP (around $3 billion) as the production of goods and services has dropped significantly.

Reliable access to electricity is a prerequisite for sustainable economic development and continued growth. An unreliable and inadequate electricity supply system has been one of the main reasons for Pakistan’s anaemic economic growth and poor quality of life.

Inefficiencies of power generation and distribution companies are due to crumbling transmission networks with distribution losses of over 30 percent, coupled with rampant electricity theft. More importantly, they are due to lack of timely investments and failure to collect payments from major defaulters, including government departments. Continued mismanagement, institutional weaknesses and poor and non-functional business models have resulted in a lack of funds to maintain and upgrade the national grid. This has resulted in a widening gap between physical supply and availability of electricity across the entire country. It has also resulted in regular load-shedding by the power distribution companies which, in turn, has severely affected the quality of life of the population, industrial production and normal commercial activities.

The 2016 Asian Development Outlook of the Asian Development Bank (ADB) has listed insufficient energy and power distribution capacity as one of the main reasons for the declining economic growth of Pakistan. For instance, the textile sector, one of the most profitable businesses in the country, has also been impacted negatively. The sector currently contributes 57 percent of Pakistan’s total exports and employs some 40 percent of the country’s workforce. Power shortages have affected the operations of textile factories to such an extent that approximately 30 percent of their installed production capacity (equivalent to $3.4 billion) is simply lost. Without access to reliable electricity, major companies are relocating to other countries in the region.

Pakistan has several alternatives to ensure a reliable supply of electricity.

A Way Through the Darkness

However, the situation does not need to be as dire as this. Pakistan has several alternatives to ensure a reliable supply of electricity. The development of the renewable resource base of the country (solar, wind, biomass and hydropower) and a regional power grid among the South Asian Association for Regional Cooperation (SAARC) countries are only two of them.

A main constraint to developing renewable resources is the lack of reliable data and information to estimate its full resource potential and thus the bankability of projects. Therefore, Pakistan has joined 11 other countries for the World Bank’s Renewable Energy Mapping Project. This is a major global initiative launched in 2012 to assess the renewable energy resource base of the countries, map them and obtain data on the location and feasibility of potential project sites. A total of $22.5 million has been allocated to the overall initiative over a four-year period to 2018. It is expected to expand further, depending upon the progress and success of the project.

The other alternative, the SAARC electricity grid, has been dormant for years because of a lack of political will in a few countries. For Pakistan, one impediment has been the continued disagreement among the provincial governments on the location and relative share of power distribution. Lack of political will has been another important reason. For example, renewable energy projects like hydropower take well over a decade for completion. Political parties are concerned that the projects may not be supported if there is a change in government, making this a high-risk political decision.

A third reason is the failure to cooperate with India in hydropower development and electricity trade. For instance, power shortages in Pakistan are so severe that ADB has suggested a transmission interconnection between Dinanath in Pakistan and Patti in Punjab, India, could be reconsidered. So far, however, this has not been done.

Among the SAARC countries, only India and Bhutan have developed a thriving intra-country electricity trade. Hydropower developments in Bhutan have been mostly financed by India in the past. Consequently, Bhutan has been able to export approximately 5,620 gigawatt-hours each year to India. For Bhutan, hydropower has become the most important economic sector. It is now the primary source of electricity for domestic and industrial consumption. According to ADB, in 2013, approximately 70 percent of the total 1,500 MW of hydropower installed was exported to India after meeting domestic consumption. Taxes and dividends mainly from hydropower companies represented more than 40 percent of national revenue in 2013, the largest source for Bhutan.

Recently, the Pakistan government has been trying to improve the situation under “Roshan Pakistan” (Bright Pakistan) through multilateral collaboration. It is now collaborating with China under the China Pakistan Economic Corridor (CPEC). CPEC is China’s largest overseas investment focused on infrastructural development in the areas of transport, telecommunications, industry and energy across Pakistan. Launched in April 2015, the initiative plans to connect Kashgar in China with the Pakistani port of Gwadar through a network of roads and railways. This will provide China access to Middle Eastern markets and improve connectivity internally in Pakistan. Of the $46 billion investment under CPEC, some $35 billion has been allocated for energy and power transmission.

Pakistani Prime Minister Nawaz Sharif is also pursuing business-friendly policies to attract investment. The prospects for renewable energy are immense given the indigenous capacity of the country. Equally important is the existing political will to achieve sustainable economic growth based on a renewable energy base. However, the road to achieving a sustainable energy mix is long. Pakistan cannot rely on a single source of energy, partner or alternative, but must embark on a path that incorporates a comprehensive strategy.

The country needs such a comprehensive plan to develop long-term socio-economic alternatives and, in the process, phase out its dependence on fossil fuels. Long-term planning rather than conflicting short-term needs will have to be prioritized. This alone will enable the government to improve the quality of life of its increasingly impoverished population.