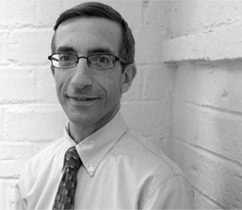 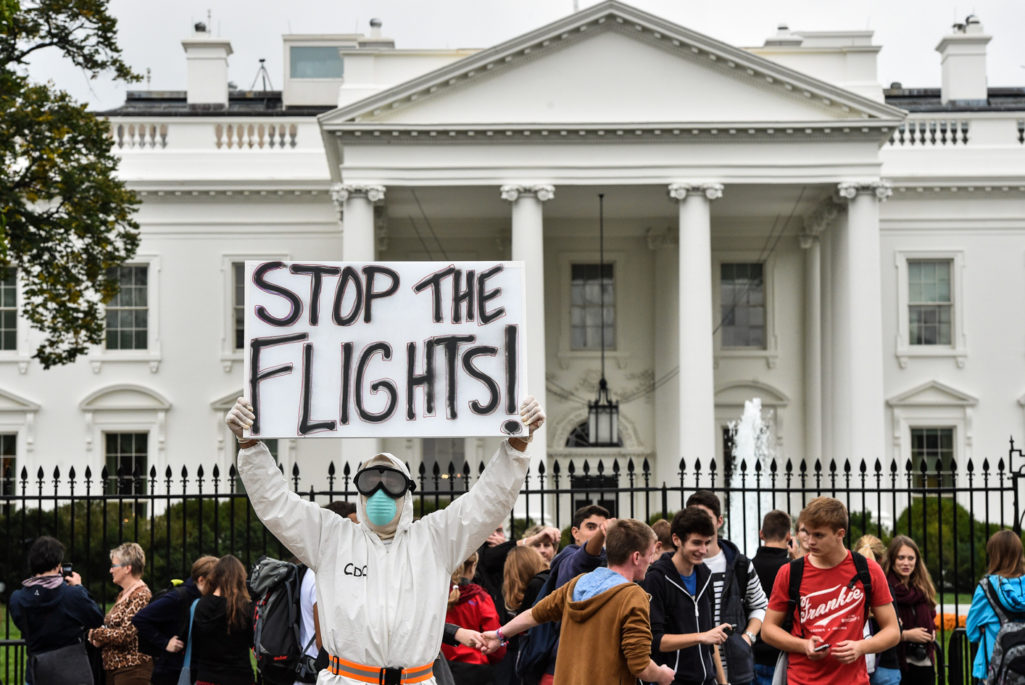 Outside the White House, a Protestor dressed in a protective suit and mask holds a poster demanding for a halt of all flights from West Africa.

In 1728, the Holy Roman Emperor Charles VI ordered that a 1,200-mile fortified chain of guard posts along the entire eastern boundary of his lands be made into a permanent Pestkordon. Travelers and their goods could be inspected and detained there, and quarantined when desired.

Ostensibly, this was to prevent plague from entering his empire from the lands of the Turks and Slavs to the east. But plague had already left western Europe before the cordon was built. Charles knew that border checks serve economic and political purposes far more effectively than they prevent disease.

In the face of today’s Ebola outbreak, the clamor for travel bans, airport screening and border closings is a reminder that sanitary cordons continue to appeal—and for the same reason: Fear of disease is easily exploited to achieve political ends.

The Centers for Disease Control and Prevention announced on Oct. 8 enhanced screening for Ebola at five U.S. airports where a high volume of passengers from West Africa land, beginning with JFK. Six Canadian airports will begin “targeted temperature screening,” the Public Health Agency of Canada said, as will Heathrow and Gatwick airports in England. All of that is in addition to the screening measures already implemented at the airports in West Africa, where the outbreak is centered. As of Oct. 13, some say that’s not enough and want to ban flights from the African outbreak zone.

Two aspects of this new Pestkordon are troubling.

First, there’s the striking contrast between the modern world we claim to live in and the world we make when we are in the throes of plague hysteria. We laugh at the notion of borders when it comes to Facebook and rue the government of China for enforcing them when it comes to Internet availability for its citizens. But when faced with danger—or, more to the point, when a minor threat invokes fear—we want to shut the borders.

Second, shutting borders or establishing sanitary cordons is worrisome because it is antiquated thinking. Germs have always been travelers. Witness cholera, AIDS, SARS, the 2009 H1N1 flu or just each winter’s garden-variety flu. They are all transoceanic. That germs can now travel faster than ever makes them just like everything else in the world.

Successful sanitary cordons were usually defenses that shut disease into a community, not out. The English village of Eyam was said to have kept the Great Plague of 1665 from spreading to other parts of Derbyshire, for instance, by shutting itself off once some village residents fell sick. In 1900, San Francisco was partially successful at corralling plague inside its Chinatown for some weeks.

But cordons more often appear to work only because the danger is over—as was the case with Charles VI’s border. They may be of limited effectiveness locally. In the bigger picture, they may be closing the barn door after the horse has bolted, as with this August’s cordon in Liberia and Sierra Leone. Sanitary cordons are constructed along political boundaries instead of the more pertinent geography of a virus’s spread. And, as CDC official Martin Cetron has asserted, travel is a “humanitarian bridge” to move personnel and supplies to affected areas.

The new Pestkordon won’t be effective. SARS taught us that back in 2003 when at least 35 million travelers or would-be passengers were screened with temperature sensors, but not one case of SARS was detected. Fever is too common and SARS was too rare, especially among people fit enough to travel. The costs, both monetarily and in terms of restricting the movement of necessary aid or supplies, can be great. Screening for a virus can play up to the old atavisms about foreignness and danger, and—in the case of Ebola—race.

The world has also changed. The majority of the global population lives in cities, meaning some three billion human beings are within about 24 hours’ travel of most of the world’s other human beings. Goods are constantly in transit from one country to another. In today’s world, borders are permeable and the conceptual space they circumscribe—“the West” or “our homeland”—is at best fluid.

That border control is often about something other than protecting the public is perfectly evident in what CNN is calling the “Ebolification of immigration reform”. Republican senatorial candidate Scott Brown and Senator Rand Paul are citing Ebola as a reason to close the U.S. border – with Mexico. These men know quite well that a West African virus isn’t going to be common among Central Americans. Still, they can look for votes by demanding border closing. Painting the U.S. as vulnerable and claiming that dark-skinned people are bringing us their germs remains, it seems, a popular move. Indeed, in the past few days we’ve seen both Democrats and Republicans use the “getting tough on Ebola” strategy, presumably as a way to win votes.

The Ebola outbreak will end, although there will likely be more cases in the U.S. and many, many more in West Africa before it does. The West needs to help affected countries contain the epidemic and treat the infected. But, the wealthy world also needs to maintain funding and enthusiasm for undramatic but indispensable measures, like contact tracing, that can halt the spread of an outbreak in its early days. Long-term solutions, like establishing permanent public health infrastructure and programming to deal with illness as it arises, are also critical.

The question is whether we can summon the resolve to create and implement sound public health measures both at home and in Africa so as to limit the outbreak’s effects – or if Ebola’s victims are going to be turned into straw men serving the aims of those who capitalize on Americans’ fears.

Philip Alcabes is Professor in the Department of Allied Health at the School of Nursing, Adelphi University, in Garden City, NY. Alcabes studies the history, ethics and policy of public health. In addition to his book, “Dread: How Fear and Fantasy Have Fueled Epidemics from the Black Death to Avian Flu” (2009), he has written essays on these topics for The American Scholar, Virginia Quarterly Review, and the Chronicle of Higher Education, as well as peer-reviewed journals.