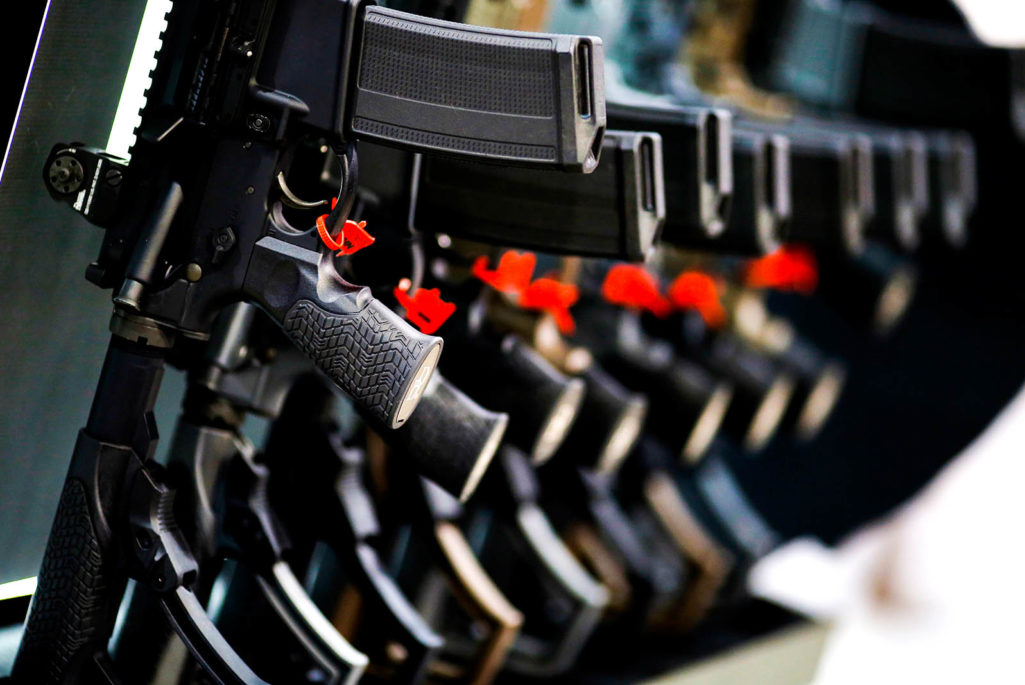 A row of rifles is seen on display. Demand for weapons has seen a spike, and Asia is leading the pack.

The volume of international transfers of major weapons increased by 8.4 percent from the 2007-11 period to the 2012-16 period, according to a recent report published by the Stockholm International Peace Research Institute (SIPRI).

In this time, Asian and Oceanian imports of arms increased by 7.7 percent. Moreover, five of the 10 largest arms importers in 2012-2016 were from the region, namely India, China, Australia, Pakistan and Vietnam.

Figure 1. The trend in international transfers of major weapons, 1950–2016 Source: SIPRI Arms Transfers Database (Feb. 20, 2017)
Note: The bar graph shows annual totals and the line graph shows the 5-year moving average (each data point in the line graph represents an average for the preceding 5-year period). The SIPRI trend-indicator value (TIV) is a measure of the volume of international transfers of major weapons. The method used to calculate the SIPRI TIV is described on the SIPRI website.

While the flow of arms during this 2012-16 period increased to Asia and Oceania (43 percent of global imports) and to the Middle East (29 percent), flows to the Americas, Europe and Africa decreased. The ﬁve biggest exporters during this time were the U.S., Russia, China, France and Germany—accounting for 74 percent of all arms exports. The ﬁve biggest importers in this period were India, Saudi Arabia, the United Arab Emirates, China and Algeria—accounting for 34 percent of all arms imports. “With no regional arms control instruments in place, states in Asia continue to expand their arsenals”, Siemon Wezeman, Senior Researcher with the SIPRI Arms and Military Expenditure Programme, said in a statement.

India accounted for 13 percent of total global arms imports between 2012 and 2016, making it the largest importer of major arms in the world, and overshadowing its regional rivals, China and Pakistan. Russia supplied 68 percent of India’s arms imports, the U.S. 14 percent and Israel 7.2 percent. One of the primary reasons India is the largest importer is that it has not been able to indigenously design and manufacture its own weapons, according to the report. “While China is increasingly able to substitute arms imports with indigenous products, India remains dependent on weapons technology from many willing suppliers, including Russia, the USA, European states, Israel and South Korea,” Wezeman said.

China has, over time, developed its own production capabilities and is able to manufacture advanced weapons indigenously, thus reducing dependence on imports and resulting in an 11 percent decline in arms imports between 2007-11 and 2012-16. According to the report, while China was comfortably the largest importer of weapons globally in the early 2000s, it has since dropped to fourth position. China exported 74 percent more arms in 2012-16 than in 2007-11 and increased its share of global arms exports from 3.8 to 6.2 percent. In all, China exported weapons to 44 countries in this period (up from 38), including to a few ex-Soviet states for the first time.

Southeast Asia. Competing territorial and maritime claims in the subregion were largely responsible for the 6.2 percent increase in weapons imports in Southeast Asia. Vietnam was the largest weapons importer in the region—it moved from being the 29th largest importer in 2007-11 to the 10th largest in 2012-16, having witnessed a 202 percent increase in weapons imports. This is the highest growth rate among the top 10 importers in 2012–16. During the same period, the Philippines increased its arms imports by 426 percent, and Indonesia increased its arms imports by 70 percent, whereas Singapore’s arms imports decreased by 47 percent, largely because it was still absorbing major purchases made in 2007-2011, when it was the world’s 7th-largest importer.

Globally, the sales of weapons have reached their highest level since the culmination of the Cold War, and the demand has been driven largely by Asia. As weapons demand increases across Asia, so, too, do accompanying risks for all stakeholders including societies, businesses and governments, particularly given the potential hotspots in the region.