At the Intersection of Insurance and Flood Risk 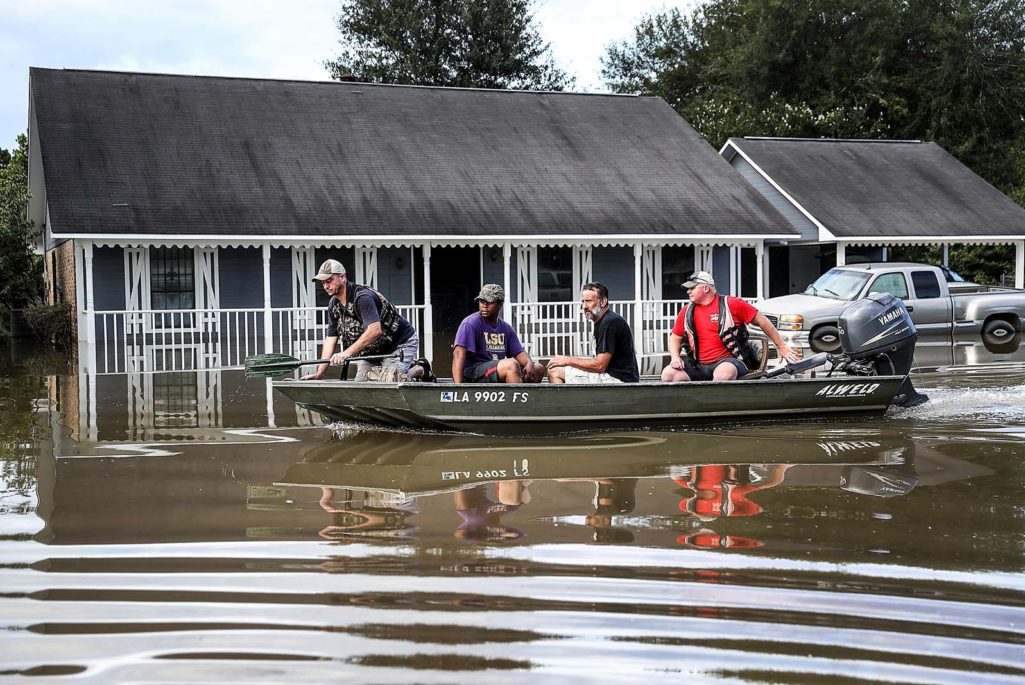 Richard Schafer navigates a boat past a flooded home on August 15, 2016 in Baton Rouge, Louisiana. Record-breaking rains pelted Louisiana over that weekend leaving the city with historic levels of flooding that have caused at least seven deaths and damaged thousands of homes.

Disasters are everywhere; nowhere seems immune. According to climate scientists, it will just get worse as the planet warms.

Economist Michael Greenstone, who runs the Energy Policy Institute, argued last month in the New York Times that if insurance prices reflected risk, they could incentivize homeowners to undertake retrofits needed to protect their homes. The argument, which has been made by others, is that if insurance costs less for safer homes, homeowners will undertake protective measures to realize those savings.

Unfortunately, it’s not that simple.

There are three reasons why risk-based insurance alone is not enough to solve our climate adaptation problems.

First, very few people buy disaster insurance voluntarily. Price discounts for hazard mitigation only create incentives for those who actually pay for insurance. Greenstone holds up the California Earthquake Authority (CEA) as the gold standard of risk-based pricing that can incentivize earthquake retrofits, but only about 10 percent of residences in that state are protected against earthquakes. For flood insurance, too, take-up rates are dismally low in areas where purchase is voluntary (see estimates here, here and here).

This presents a real conundrum. Disaster insurance priced to truly reflect the risk can be costly. There are not many reliable estimates of how disaster insurance demand changes as the cost of the insurance goes up, but some evidence suggests people may stop buying insurance when costs rise. For instance, as higher flood insurance prices have been phased in, the number of policies are declining. Of course, other things drive demand beyond price: risk perceptions and knowledge, assumptions about post-disaster assistance and other factors.

If no one buys insurance when it is priced at risk-based levels, have we done anything to better manage our risk? If we really want to use insurance prices as an incentive tool, an insurance policy might have to be mandatory, but this raises equity questions. It may be necessary to couple a requirement to insure with assistance to low- and middle-income families that would have trouble affording their policies.

Second, hazard mitigation can be expensive and homeowners, even if rewarded with lower insurance premiums, may not have the necessary upfront capital to invest in such measures. Elevating homes to reduce flood risk (and secure substantial savings on flood insurance) can cost tens of thousands of dollars, up to $100,000. Earthquake retrofits, rewarded by the CEA, could be as little as $3,000 to $7,000, but could range up to $30,000, or even exceed $100,000, depending on the building and what needs to be done. Without money up front, even if payback periods are favorable, this may be out of reach for most homeowners.

To encourage hazard mitigation, then, financing options to help homeowners cover the upfront costs—with minimal transaction costs—are needed; to date, these have been more a nice idea than a reality. There is promise that loans or other arrangements that pay back through lower insurance premiums could potentially be developed. Such efforts need more attention.

Even if financing arrangements actually be implemented, though, a host of other challenges that have nothing to do with price would remain: the time it takes to figure out how to do such retrofits, find contractors, get price estimates and oversee the project; the observed inattention to disaster risks when the weather is fair and not wanting to disrupt one’s life during the construction. Many localities have found that if widespread loss reduction is the goal, it needs to be mandated. Los Angeles, for example, recently adopted regulations that roughly 15,000 buildings be retrofitted to withstand a strong earthquake.

If no one buys insurance when it is priced at risk-based levels, have we done anything to better manage our risk?

There are cheaper ways to lower disaster losses. Most of these, however, are not enough to warrant substantial savings on insurance premiums. Where price reductions do exist, no research has been done to determine the extent to which they actually lead to brand-new investments in hazard mitigation.

Third, insurance prices—even fully risk-based ones—only account for the risk over the next year. Insurance for homeowners is generally an annual contract. From sea level rise to changing storm patterns, the risks a home faces today are not the risks it will face tomorrow. Future risks are not captured in today’s insurance prices. To mitigate against changing risks and limit construction in areas that will become too risky in the future, homeowners, communities and developers need tools to help them evaluate the uncertainties in the magnitude, nature and timing of climate impacts to make decisions about what level of protection is optimal and when to invest in the needed changes.

So yes, risk-based insurance is a useful objective and will better align incentives; however, it needs to be supported with building codes and zoning, strategies to increase take-up rates of disaster insurance, programs to help low-income policyholders, funding models for hazard mitigation, information and outreach about changing risks and a host of other programs. These complicate the policy response, but it is clear that insurance prices alone won’t protect us from the costs of climate change-induced disasters.

Sydney Hedberg Director at Marsh McLennan
URL: https://www.brinknews.com/at-the-intersection-of-insurance-and-flood-risk/
Get ahead in a rapidly changing world. Sign up for our daily newsletter. Subscribe
​​