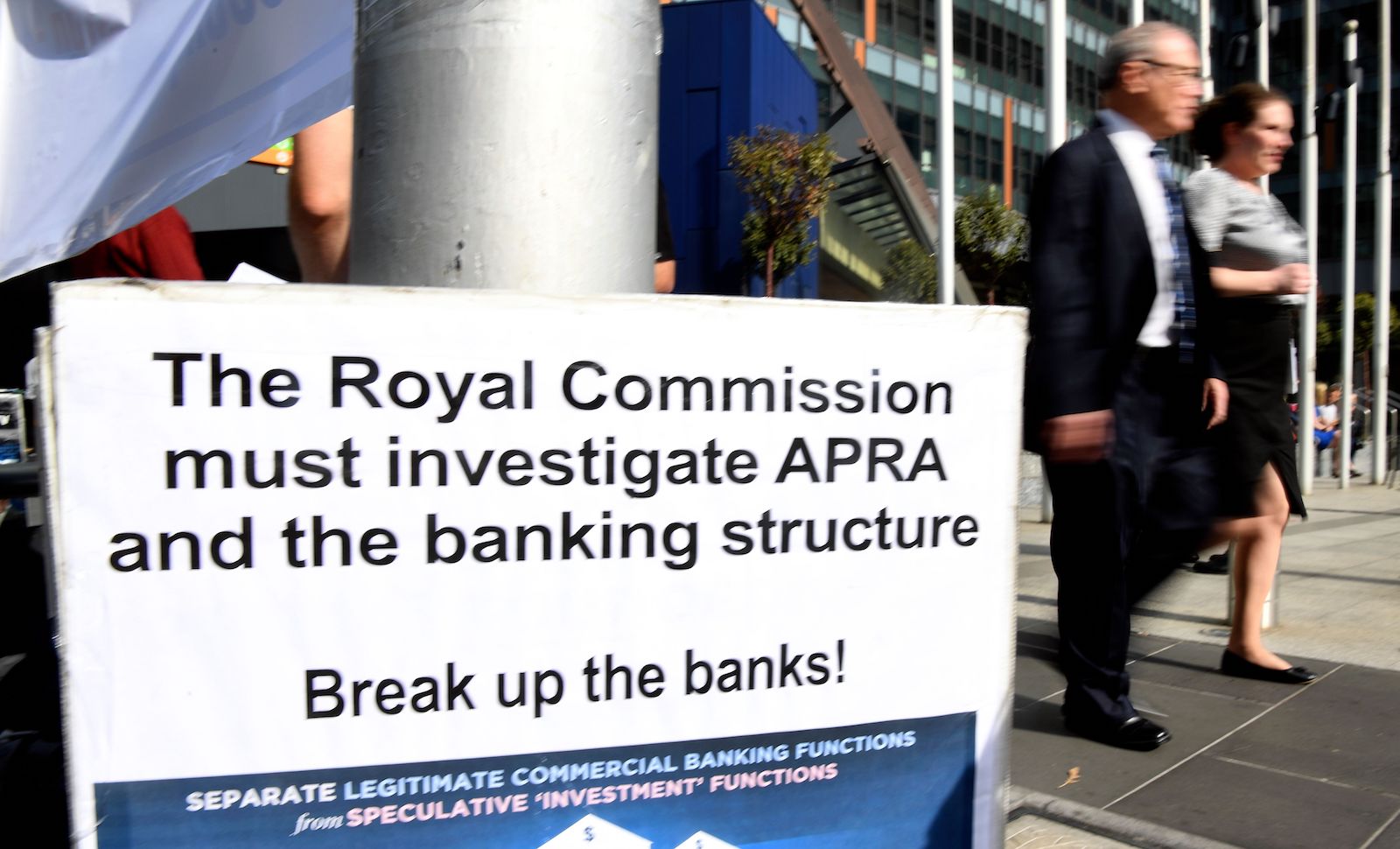 A photo taken in Melbourne shows a placard outside the royal commission set up to investigate misconduct in the banking sector. In Australia, the average number of securities class action claims lodged per year has risen fourfold over the last 10 years—equivalent to a 300 percent increase. The growing number of royal commissions and other industry inquiries has also put directors and officers (D&O) under the spotlight. The surge in shareholder class actions has notably made its mark on the D&O liability insurance market and the management of such insurance programs in Australia.

What Is a Shareholder Class Action?

Class action lawsuits provide a means by which the claims of many individuals against the same defendant(s) can be executed by a single representative, on behalf of the group. Melita Simic, managing principal FINPRO (Financial & Professional lines) at Marsh, explained the two main benefits offered by a class action suit: “Firstly, it allows a dispute involving large numbers of people to be potentially resolved through a single case. Secondly, it can be a solution for circumstances where, despite many people being affected, the size of each person’s loss is not economically viable to recover through individual lawsuits.”

In Australia, there has been an increasing trend for shareholder class actions, whereby shareholders launch class actions against companies and their directors for claims related to investments in the company’s shares.

The Rise of Shareholder Class Actions

Securities class actions typically follow significant declines in share prices of publicly listed companies. The majority of current shareholder class actions are based on the grounds of misleading or deceptive conduct or the failure to fulfill continuous disclosure obligations to inform the market of information that may materially impact a company’s share price.

“Litigation funders are an interesting subject. Whilst they do provide shareholders with funding access to pursue legal actions against corporate giants, their motives have been questionable at times, especially given there’s currently no legislation or regulation in Australia which limits the fees that funders can charge,” said Craig Claughton, managing director and FINPRO leader at Marsh.

In an effort to ensure that the costs are appropriate and proportionate and the interests of plaintiffs and class members are protected, an Australian Law Reform Commission (ALRC) inquiry into class action proceedings and third-party litigation funders was announced by the federal attorney general late last year and is currently underway. The inquiry seeks to examine the adequacy of regulation around conflicts of interest, character and fitness requirements for litigation funders, legal costs associated with class actions and the potential of capping the proportion of awards retainable by lawyers and litigation funders.

Marsh recently delivered a submission to provide the ALRC with a view on how class actions and litigation funders are impacting the current D&O insurance market. Mr. Claughton further added, “Our empirical evidence shows that there is a direct link between the growing size and number of class actions/resultant insurance claims involving D&O insurance and the cost and availability of that insurance.” The wave of shareholder class action activities has prompted both insured entities and insurers to re-assess their views on securities entity cover. Insurers are questioning the sustainability of continuing to offer the cover, and the insured parties are re-examining their cost-benefit analysis of purchasing the cover.

An insurer’s perspective. Insurers today are acutely aware that shareholder class actions have been one of the largest contributors to D&O losses. The number of claims and reported circumstances are currently exceeding the total insurance market premium pool by a significant margin. Insurers’ profitability has been heavily impacted due to sustained periods of low premiums and increased claims frequency and severity. D&O securities class action claims and settlements against Australian Securities Exchange-listed companies have been estimated to cost insurers in excess of $1 billion since 2011.

As a result, insurance renewals are being increasingly scrutinized as insurers seek to rebalance their position through premium adjustments to compensate for the claims. This has seen the aggregate cost of D&O insurance for corporate Australia increase by over 250 percent over the last seven years.

An insured’s perspective. Having to maintain increasing policy retentions could have a negative impact on a company’s available capital and shareholder value. Significant premium rises have prompted some companies to reassess their entity cover options; and the steady demise of availability of D&O coverage, in general, could see corporate Australia struggle to attract, retain and develop capable and experienced directors and officers.

Given the rising cost of securities entity cover, companies are weighing the benefits of having the cover against the potential disadvantage of eroding cover intended for directors and officers in the event of a securities entity claim. What Can Boards Do?

Shareholder class actions can pose significant risks to those involved, in terms of legal exposure and damage to reputation. Directors and officers need to understand the changing legal landscape, market conditions and the coverages that may or may not be available under D&O liability insurance at present and in the foreseeable future.

Key factors that should be considered when structuring a D&O policy include: sufficiency of a company’s assets to cover its indemnification obligations owed to its directors and officers; scope and size of a company’s operations; future prospects and expected growth of a company; likelihood of significant transactions for a company, such as a merger or an acquisition, dissolution or bankruptcy; and a company’s claims history and the litigation risk profile of its business and industry.

In addition, directors should maintain an open dialogue with their brokers and insurers to be prepared for any changes in the way their insurers offer D&O insurance, in particular securities entity cover. The fundamental purpose of D&O insurance is to protect a company’s directors and officers against personal liability, and is often the last line of defense for their personal assets.

Australia’s current shareholder class actions landscape is potentially contributing to the destabilization of a sound corporate governance regime through eroding the availability and raising the cost of D&O liability insurance products for Australian risks. Significant M&A activity among insurers in recent years has further reduced competition and alternative options for insured parties. This, coupled with no signs of securities class actions slowing down, means that perhaps we need to consider the possibility of a corporate Australia without the protection afforded by D&O insurance. This, in turn, could potentially lead to a demise of the quality and availability of directors and officers to act as trustees for future development of corporate Australia.

Australia’s D&O premiums are, however, beginning to reflect closer to prices charged in the U.S. and some European jurisdictions. It is expected that insurers will continue to readjust upward in both pricing and retentions. Therefore, it will be interesting to observe the impact on insured parties’ purchasing patterns in the long run.

Richard leads Marsh’s Financial Institution practice in Australia and has over 16 years’ experience focusing predominately on complex financial lines servicing and insurance program optimization. Richard has previously managed the NSW practice for Financial & Professional Services and was Marsh’s Financial Institutions practice leader for Asia based in Hong Kong for four years. He has been responsible for the negotiation and placement of complex insurance programs, management of complex claims and policy wording development.

Is a 4-Day Workweek the Cure for Burnout?

Seamus Gillen Former Policy Director of the Chartered Governance Institute
URL: https://www.brinknews.com/australias-rapidly-changing-do-insurance-market/
Get ahead in a rapidly changing world. Sign up for our daily newsletter. Subscribe
​​