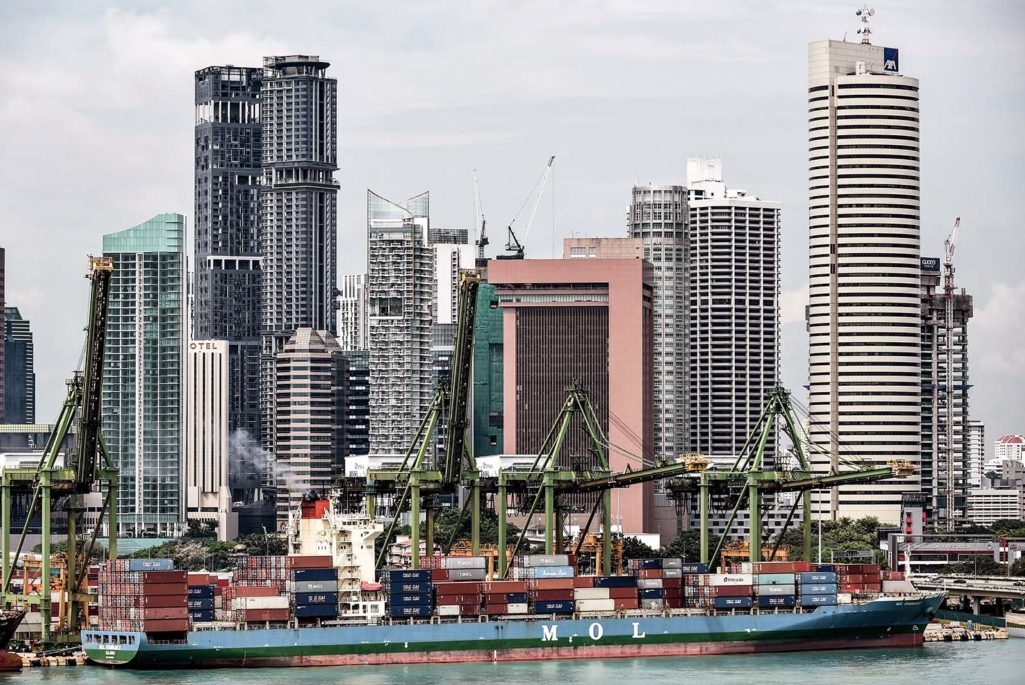 Vessels berth along the pier of the Keppel container terminal next to the business district of Singapore on November 27, 2014. Singapore was ranked as the top country for doing business by a recent World Bank report.

Singapore is the best place on earth to conduct business, according to the latest release of the World Bank’s Doing Business report.

This year’s report parses 189 countries across 10 areas, including starting a business, getting electricity, enforcing contracts, paying taxes and cross-border trade. The highest possible score is 100. The higher a country’s score, the better the regulatory environment is for starting up and running a local company.

New Zealand and Denmark round out the top three countries. The former was highlighted for registering property and protecting minority investors and the latter scored well in how it deals with construction permits and cross-border trading.

As seen in the first chart below, there’s a global spread among the Top 10 countries, with three from Asia five from Europe and one from North America.

The top 30 economies listed for ease of doing business aren’t the ones with little regulation; rather, they all have “good rules that allow efficient and transparent functioning of businesses and markets while protecting the public interest,” the report said.

Starting Up Getting Easier

On a global basis, starting a business has become dramatically easier. In 2003, it took 51 days on average to start a business; however, by 2015, that time shrank by more than 50 percent, to just 20 days, according to the report.

Regulation is at the heart of doing business. Designed well, it can facilitate day-to-day business; designed badly, it can hamper the business climate to the point of stifling innovation and growth. For example, in Equatorial Guinea, it takes 18 separate procedures and 135 days to start a business, which is a lot of paperwork and bureaucracy to wade through. Resolving a commercial dispute takes an average of 1,402 days in Guatemala, resulting in companies being wary of taking on new vendors or customers they don’t already trust.

The most developed OECD countries have the highest scores on average for doing business, but “good practices in business regulation can be found in almost all regions… The difference between the best and worst scores in a region can be substantial; however, especially in Sub-Saharan Africa, the Middle East and North Africa and East Asia and the Pacific,” the report said.

The use of the Internet can be a big equalizer in helping to streamline business processes. Unfortunately, use of the Internet “remains largely confined to more developed economies,” the report said. While high-income OECD economies and Europe and Central Asia make the greatest use of the Internet to facilitate business dealings, Sub-Saharan Africa stands in stark contrast, as very few economies there use electronic platforms in business regulation. Of the nine possible regulatory transactions included in the report’s analysis, eight of them can be done online in Australia, Denmark and Estonia. Meanwhile, in the Central African Republic, the Republic of the Congo and Equatorial Guinea, none of the transactions are possible via online connections.

Last year, 122 countries implemented at least one regulatory reform related to the areas analyzed by the report, for a total of 231 reforms. Rwanda made reforms in all areas measured by the report.

According to the report:

Sub-Saharan Africa alone accounted for about 30 percent of the regulatory reforms making it easier to do business in 2014/15, followed closely by Europe and Central Asia. Members of the Organization for the Harmonization of Business Law in Africa were particularly active: 14 of the 17 economies implemented business regulation reforms in the past year—29 in total. Twenty-four of these reforms reduced the complexity and cost of regulatory processes, while the other five strengthened legal institutions.

Colombia made the most improvement in the Latin America and Caribbean region, thanks to reforms made in paying taxes and getting credit. In the Middle East and North Africa, Egypt made the most progress over the past 12 years, though most of that progress came before 2009. Improvements there were seen in the area of starting a business. In East Asia and the Pacific, China is the standout over the past 12 years of the report, owing to business tax reform. And in the South Asian economy, India made the biggest gains by cutting down the time needed to start a business and implementing an online tax registration system. Finally, among the OECD high-income countries, Poland stands out for gains related to the functioning of the courts while dealing with contracts and improving the insolvency process.

The report’s authors acknowledge some shortcomings in compiling the study. Because the report seeks to be global in nature, the choice of indicators is constrained to data that can be reliably collected even in the least developed countries. Many areas that matter to the business environment, investors and the overall economy aren’t tracked, including a number of dimensions of macroeconomic stability, prevalence of corruption, antitrust policies and worker skill levels.