Coping with Technology: Challenges and Opportunities for ASEAN+3 Economies 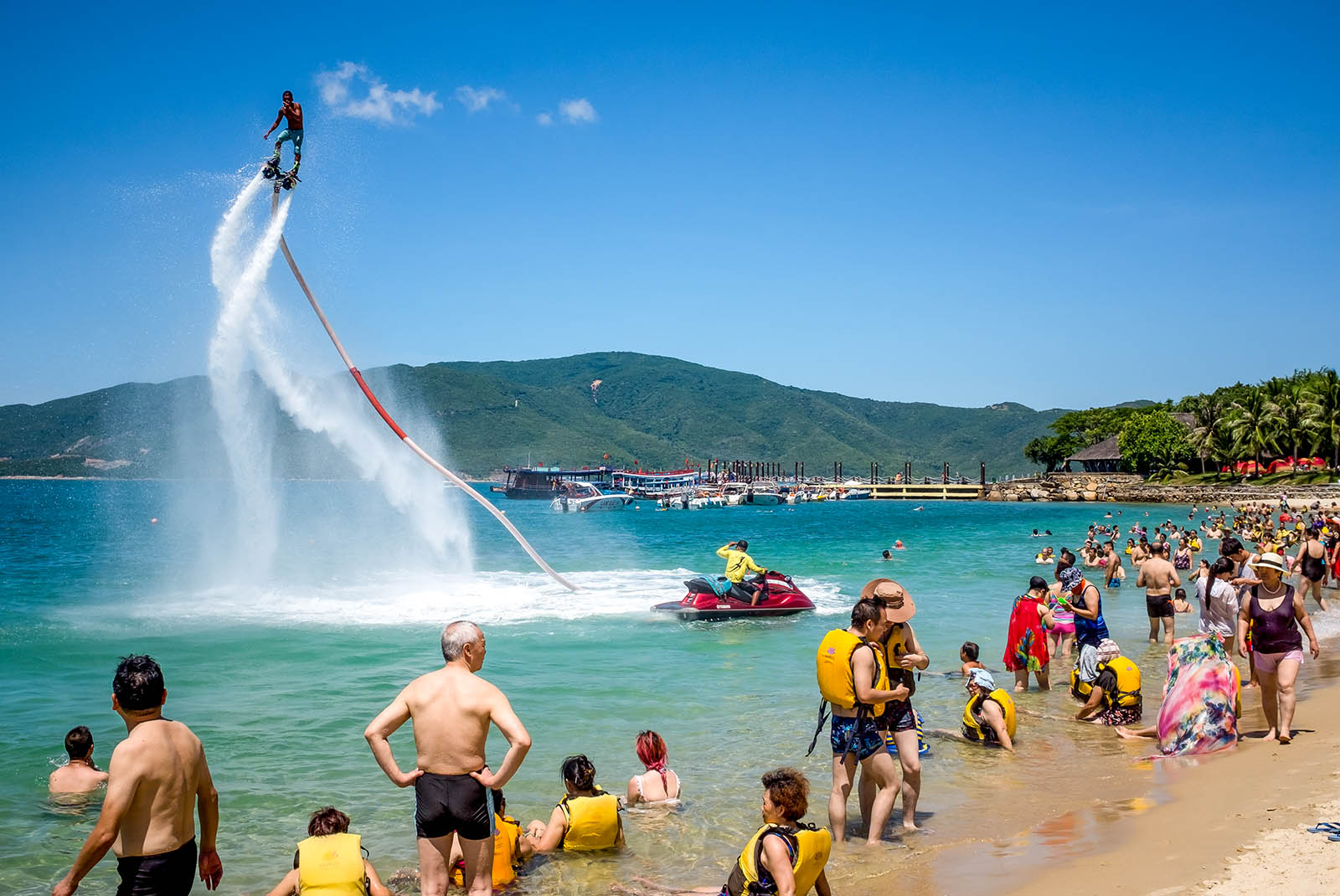 Tourists watch a flyboard show by the beach of Hon Tam Resort in Nha Trang, Vietnam. Many ASEAN economies need to invest in their infrastructure to draw more tourists.

Technological change and the relentless pace of automation offer significant opportunities for productivity growth and improved efficiency, but they also bring related risks of increased worker displacement and the challenge of upskilling labor.

While the rise in trade protectionism (discussed in the first part of this interview) is an immediate reality the ASEAN+3 economies are confronted with, coping with technological advances and using them to drive productivity and growth is a medium- to long-term challenge for the region.

In this second part of the interview, AMRO’s chief economist, Hoe Ee Khor, touches upon this topic, as well as other key risks facing the ASEAN+3 economies.

BRINK Asia: What will the impact of technological advances and increased automation be on employment and jobs in the region?

Hoe Ee Khor: One of the global trends scaring everyone is that of automation taking away jobs, particularly in the area of capital-intensive manufacturing. In the auto sector, for example, employment has been shrinking, even in China, which is the world’s leading auto manufacturer. Fortunately, there are still some sectors that are quite labor-intensive, such as garment manufacturing—sectors such as these are still providing ample opportunities for employment. However, this is a limited window, because economies cannot continue doing this forever. What this means is that countries need to plan ahead, and they need to upskill their labor force if they want to move up the value chain. Otherwise they have to move into new industries if they want to stay with manufacturing and move up the value chain.

Take the case of Cambodia, which is now moving beyond garments and textiles to other consumer goods and electronics. We are seeing this happening in a few other less-developed ASEAN economies as well, partly due to outsourcing of production from China, which has seen production costs rise in recent years. But yes, for sure, automation is an issue that regional economies have to come to terms with and prepare for.

At the same time, technology has also transformed the service sector in terms of converting it into an engine of growth. Take the example of the business process outsourcing (BPO) industry in the Philippines, which has become an engine of growth, creating jobs and income for the local economy. The BPO industry accounts for 40 percent of exports and has created more than 1 million jobs, the wages for which are three to five times higher than the national average. That is an example of how technology has actually helped. Another area that we are very positive about is that technology has led to a reduction in telecommunication and transport costs, and that has led to an explosion of tourism … take the case of outbound tourism from China, for example.

BRINK Asia: Can you tell us more about how countries can benefit from the boom in tourism and its relation to technology?

Dr. Khor: In order to take advantage of the explosion in outbound tourism from countries such as China, the regional economies need to provide good connectivity and infrastructure. You find that a lot of Chinese tourists have been visiting the more-developed regional economies—Japan and Korea have been the primary beneficiaries. In Korea, for example, after the global financial crisis, we found that Chinese tourist spending actually helped support economic growth significantly. The same thing happened in Thailand—tourist spending has been very strong, which helps to offset the slowdown in investment owing to the floods and the political uncertainty.

Many regional economies don’t have the facilities, and they need to invest in their infrastructure to draw more tourists—both digital infrastructure and hard infrastructure. Technology plays a big part in the customization of services for tourists in a way that it could not be done in the past; and as we see increased digitization in the region, that will also result in creating more curated experiences for travelers, something that many tourists look for these days.

On the whole, we are quite optimistic that tourism can be a major area of growth that countries can take advantage of. In general, I think Asian economies have adapted to technology rather well—right from China, where everything is becoming digitized, to Indonesia, where online transactions have taken off.

BRINK Asia: Do you think the less-advanced ASEAN economies are equipped to cope with the changes being witnessed?

Dr. Khor: The less-advanced countries include Cambodia, Laos, Myanmar, and Vietnam (the CLMV countries). These economies have been the biggest beneficiaries of regional integration, without which they would not have been able to sustain the high growth they have been seeing. About 70-80 percent of the investment into these countries has been intra-regional, and about 60 percent of the trade is also intra-regional. Because of diversity in the region, these economies have benefitted from incoming investments from the ASEAN economies and also the “plus 3” (China, Japan, and Korea).

Take the case of Samsung in Vietnam—it has become the country’s largest manufacturer and has transformed the country’s manufacturing sector. For the longest time, Korea was focused on the West, but now we see a lot of interest from the Koreans in ASEAN—they are doing what Japan did in the 1980s. Ironically, it is creating trouble in Korea because there are a lot of complaints that the “chaebols” are not investing there, but are creating jobs outside the country.

As for coping with the technological changes we are seeing, the poorer economies, ironically, are not facing constraints as acutely as the middle-income countries, which really have to move up the value chain and invest in technology, skills upgrading and training. Everywhere we go, one complaint is that of scarcity of skilled labor for a wide range of industries. We see it in the Philippines and in Thailand and in Malaysia.

Malaysia is at the high end of the middle-income band and is trying to move to the high-income level. To make the transition, it has to focus on upskilling the labor force, because the kind of manufacturing that it is now looking into is increasingly more skilled- and more capital-intensive. Malaysia has created a department within the Economic Planning Unit that is focused on retraining and upskilling the labor force. So far, it would be fair to say that Malaysia has benefited significantly from overseas labor, which is cheap and has helped keep wages down. Now, it is about getting the balance right—it needs to provide incentives for the upskilling of local workers, and at the same time, it needs to be more targeted in terms of the type of foreign workers its economy requires.

What the low-income countries should not forget, however, is that they are also rapidly moving toward middle-income status, and they therefore need to think ahead and plan better because, sooner rather than later, they are going to face the same problems.

BRINK Asia: In your view, what are the three biggest risks regional economies are faced with?

Dr. Khor: In the short term, the two major risks facing the region are the ongoing trade conflicts between the U.S. and China and a sharper than expected rise in global interest rates. These two risks have the potential to derail the economic recovery in the region. However, our simulations show that the impact of a trade war is likely to be limited, unless it leads to a severe loss of confidence, causing investment to fall and destabilize financial markets. Similarly, the current tightening of financial conditions is manageable unless there is a sudden spike in interest rates.

From a longer-term perspective, the evolving geopolitics in East and Southeast Asia is always a concern. The region has done well because it has been very peaceful over the past few decades, and that has allowed the region to grow and focus on economic development. However, developments on the Korean peninsula are always a potential risk, and tension over the South China Sea is another. We regard both of these as tail risks, although there is no denying that they can have big implications on trade and economic growth. To maintain prosperity, the region needs to continue integrating and deepening economic ties—and not resort to protectionist measures that can pit the economies against one another. So far, the regional economies have stuck together, but there is a risk this may not continue to be the case.

Another important concern is more of a challenge than a risk. The region needs to get out of the middle-income trap by investing more in infrastructure, technology and in upskilling its workforce. Fortunately, these are high savings economies, so there is capital available to plug this gap in investment; for instance, the Belt and Road Initiative is helping fill this investment gap in several economies.

While these are risks and challenges that countries in the region face, they are not insurmountable; and if the regional economies get down to it, I think they can successfully overcome all of them.

You can read the first part of the interview here.

Amy Gallo Contributing Editor at Harvard Business Review
URL: https://www.brinknews.com/coping-with-technology-challenges-and-opportunities-for-asean3-economies/
Get ahead in a rapidly changing world. Sign up for our daily newsletter. Subscribe
​​