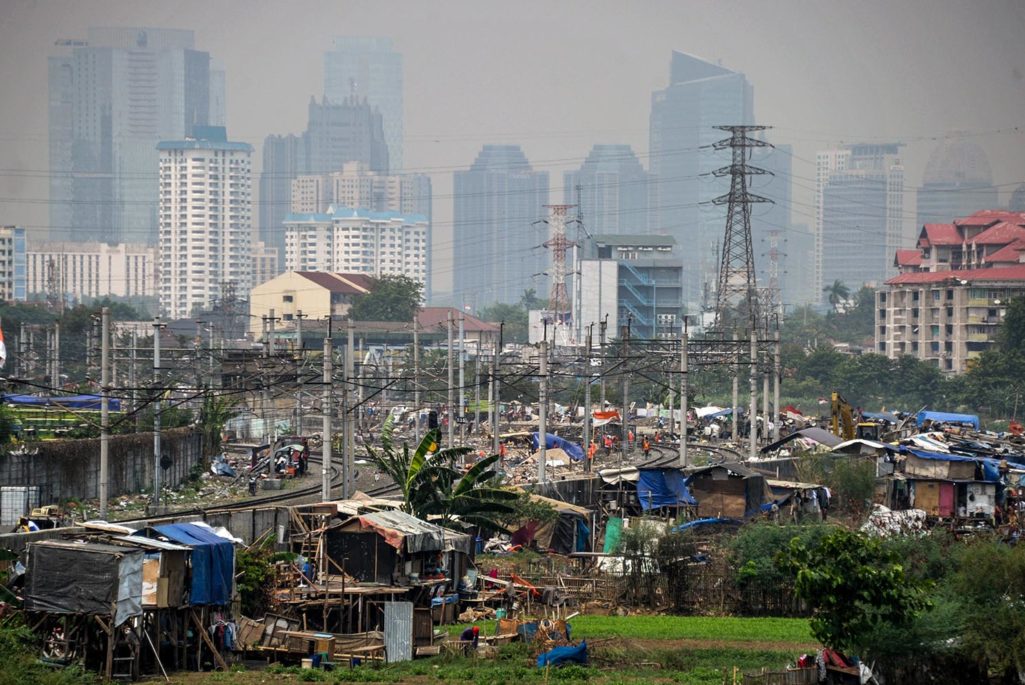 Shanty houses are seen next to Jakarta's skyscraper buildings on August 22, 2014. Speaking to AFP as aides buzzed around him at Jakarta city hall, the governor of the teeming capital outlined goals including attracting more foreign investment to Southeast Asia's top economy, and "reviving faith" in corruption-riddled politics.

Asian economies lag behind their Western counterparts when judged on policies supportive of economic freedom, according to a recent report.

While city-states Hong Kong and Singapore took the first two spots in the overall rankings, other large Asian economies performed poorly, giving rise to questions of the correlation between higher growth rates and an indication of well-being.

The three big emerging economies of Asia—China, India and Indonesia—performed poorly. Indonesia came in at the 79th spot; India came in at 112, followed by China at 113. Additionally, Vietnam—one of the world’s fastest growing economies in 2015 and expected to be the next big manufacturing hot spot in Asia, performed even worse at 116.

“Economic freedom leads to prosperity and a higher quality of life, while the lowest ranked countries are usually burdened by oppressive regimes that limit the freedom and opportunity of their citizens,” said Fred McMahon, professor of Economics with the Fraser Institute, which compiled the rankings. Economic growth is not always an indicator of economic freedom. Economic freedom includes measuring other elements like life expectancy, political and civil liberties, gender disparity, access to education, and inequality of income. Despite the low ranking, India, China, Indonesia and Vietnam have been growing rapidly over the past few years.

The index measures the degree of economic freedom in five broad areas. They include size of government (expenditures, taxes, and enterprises); legal structure and security of property rights; access to sound money; freedom to trade internationally; and regulation of credit, labor, and business. The report analyzes institutions and policies of 159 countries, based on data from 2014.

Size of Government. This means the level of a nation’s reliance on political process to allocate resources and goods and services. According to the report, when government spending increases relative to spending by households, individuals, and businesses, political decision-making is substituted for personal choice, resulting in reduced economic freedom. Hong Kong, the Philippines and India ranked 1, 3 and 8 respectively in this category, while Japan and China ranked 134 and 141.

Legal System and Property Rights. The report states that the most important function of a government is to protect persons and their rightfully acquired property as it is a key element of economic freedom. While Singapore (7), Hong Kong (10) and Japan (18) did well in the rankings for this category, the Philippines came in at 104 and Indonesia at 110.

Sound Money. Sound money is essential to protect property rights and, thus, economic freedom. Inflation erodes the value of property. When government spending is financed by creating money, it expropriates the property and violates the economic freedom of the citizens. None of the Asian economies fared too well on this parameter. Vietnam, Malaysia, India, Thailand and China ranked 148, 136, 130, 117 and 92 respectively. Japan (29), Hong Kong (43) and Singapore (37) fared better.

Freedom to trade internationally. According to the report, tariffs and quotas are hindrances to international trade. Apart from reducing the convertibility of currencies, it affects volume of trade, and in both instances, economic freedom is reduced. While Singapore and Hong Kong ranked 1 and 2, India came in at 95, Vietnam at 125, and China at 144.

Regulation. When regulations restrict entry into markets, it interferes with the freedom to engage in voluntary exchange and eventually reduces economic freedom. Regulations actually decide the freedom of exchange in credit, labor, and product markets. On this parameter, among Asia-Pacific countries, Hong Kong ranked first, followed by Singapore (4) and Malaysia (9). However, some of the largest and emerging economies in Asia fared far worse: Vietnam (111), China (131), India (132) and Indonesia (133).

In most situations, higher investment rates, faster economic growth, rising income levels and rapid reduction in poverty rates are experienced by countries in which institutions and policies are more aligned and consistent with economic freedom, according to the report.