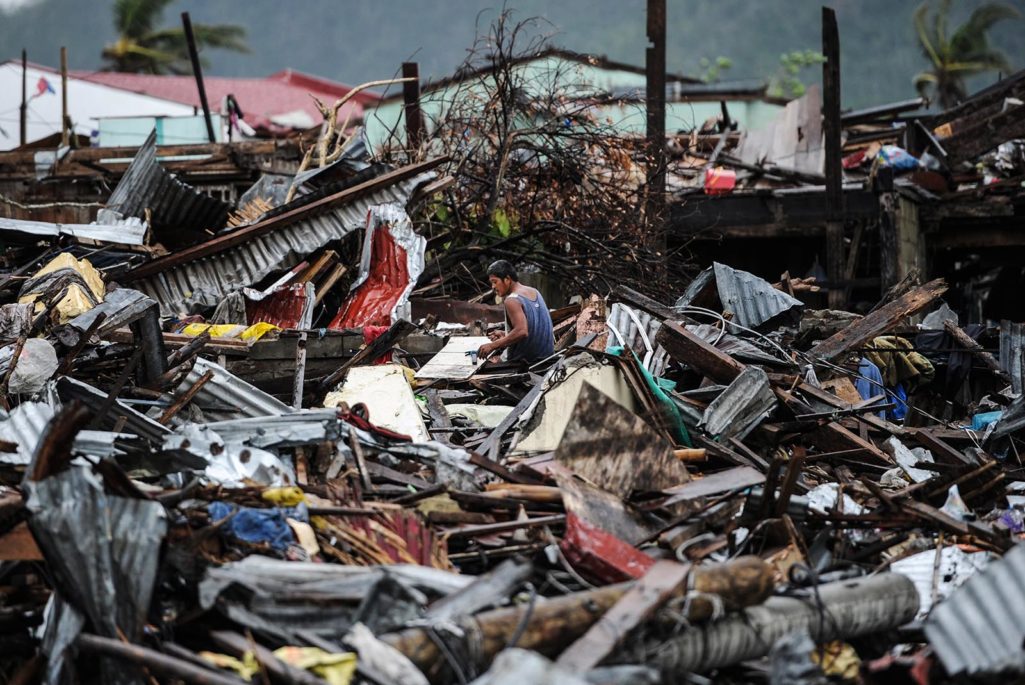 A resident sits amongst debris as he fixes a wooden door while trying to rebuild his house destroyed by Super Typhoon Haiyan, along the coastal area of Tacloban City in Leyte province on December 23, 2013. The typhoon, one of the strongest ever to hit land, left 6,102 people dead and 1,779 others missing, according to a government tally.

Extreme weather events—such as floods, storms, heatwaves—are responsible for 90 percent of all disasters during the last 20 years, according to a new UN report, which said such disasters are increasing in frequency.

The report, The Human Cost of Weather-related Disasters 1995-2015, was written by the UN Office for Disaster Risk Reduction and the Center for Research on the Epidemiology of Disasters at the Catholic University of Louvain in Belgium.

Weather-related disasters claimed 606,000 lives and affected some four billion people between 1995 and 2015, the report said.

The report estimated the economic costs of the 6,457 weather-related events to be $1.9 trillion; however, that number is “bleaker” than it appears, the report said. The true economic cost is surely higher because only 35 percent of the records used to track disasters include information about financial loss. In Africa, the number is as low as 16.7 percent, the report said.

Overall, economic losses from disasters are estimated to be between $250 billion and $300 billion yearly.

Floods were the main weather culprit, accounting for 47 percent of weather-related disasters, which affected 2.3 billion people. Asia suffered the 95 percent of the casualties, owing to its large landmass and multiple river basins and flood plains, the report said.

While the U.S. and China recorded the most weather-related events, the top 10 countries with the most affected people were China, India, Bangladesh, Philippines, Thailand, Pakistan, Brazil, Vietnam, Kenya and Ethiopia.

The report said that science can’t calculate what percentage of this increase in weather-related events is due to climate change; however, “predictions of more extreme weather in the future almost certainly mean that we will witness a continued upward trend in weather-related disasters in the decades ahead.”

“Climate change, climate variability and weather events pose a threat to the eradication of extreme poverty and should serve as a spur to hasten efforts not only to reduce greenhouse gas emissions, but also to tackle other underlying risk drivers such as unplanned urban development, vulnerable livelihoods, environmental degradation and gaps in early warnings,” said Margareta Wahlstrom, head of the UN Office for Disaster Risk Reduction, and Debarati Guha-Sapir, a professor at the Louvain center, in the forward to the report, which “underline why it is so important that a new climate change agreement emerges” from the COP21 climate talks taking place in Paris next month.

Erin Sikorsky Director of The Center for Climate and Security and the International Military Council on Climate and Security
URL: https://www.brinknews.com/extreme-weather-responsible-for-90-percent-of-disasters/
Get ahead in a rapidly changing world. Sign up for our daily newsletter. Subscribe
​​