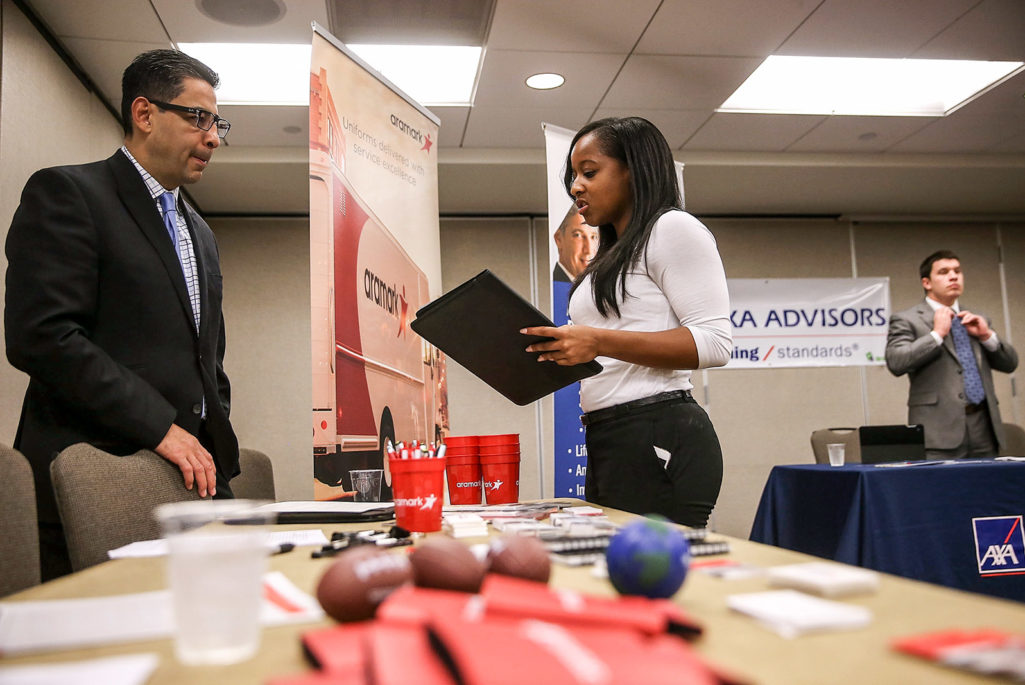 A job seeker meets with a recruiter during a HireLive career fair in San Francisco, California.

Nearly half of all U.S. companies plan on hiring next year, leading to 1.9 million new jobs, according a survey of financial professionals released Tuesday. Building on the momentum of U.S. economy in the latter half of 2014, those professionals expect GDP to rise by 2.7 percent.

The report, issued by the Association for Financial Professionals, surveyed 856 corporate treasurers and chief financial officers earlier this month. More than half expect business conditions will improve next year, “the largest percentage suggesting such improvement since before the recession of 2008-2009,” the report said.

“AFP members accurately predicted this year’s economic growth,” said Jim Kaitz, AFP’s president and CEO. “We have been tracking cash accumulation, which slowed this year as companies began to invest in the future,” Kaitz said. “Now the big news is that almost half of companies plan to expand payrolls in 2015.”

That optimism is born of a rollercoaster economy, with a harsh winter in the first half of the year giving way to an economic expansion that recorded the best six-month period for growth in the last 12 years.

More than half of financial professionals (55 percent) expect business conditions to continue to improve, and only 11 percent expect that the economy could weaken. But most respondents (53 percent) believe the economy will be in a holding pattern during the first half of the year and then steadily improve throughout the second half. The report says inflation isn’t expected to move beyond its current pace during 2015.

While the median expected GDP expected growth rate is 2.7 percent, 31 percent of those surveyed are more optimistic, believing the U.S. will see growth rates between 3.0 and 3.9 percent. Only 1 percent of survey respondents believe the economy will contract next year.

Despite the upbeat nature of the report, those surveyed expressed a number of potential threats on the business horizon. The two biggest threats steam from Washington: rising healthcare costs (51 percent) and political gridlock (41 percent).

Meanwhile, economic trouble overseas also weighs on U.S. financial professionals, with the economies of Europe, China and Asia (outside of China) each registering concern.

Rising interest rates are also top of mind for financial professionals. The gradual pullback by the Federal Reserve of its monthly purchases of long-term Treasury securities and mortgage-backed agency securities was an important milestone. Combined with the end of the latest round of quantitative easing in October, the stage is set for the Fed to raise rates. Fifty-one percent of those surveyed anticipate a rise in interest rates sometime in 2015, “with the vast majority of survey respondents believing such a move would be made during the latter half of the year,” the report says.

Fewer than two out of five financial professionals don’t believe the Fed will act on short-term rates until 2016 and another 9 percent believe that action won’t begin until at least 2017, the report says.