Flooding and the Economics of Risk Reduction 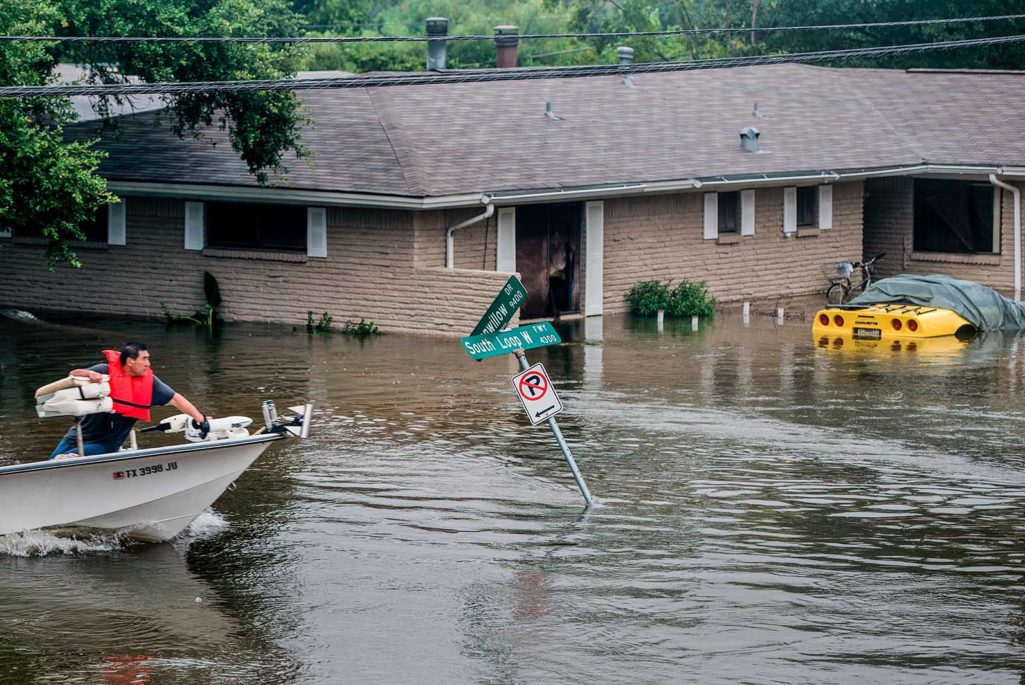 A boat passes through a flooded street during the aftermath of Hurricane Harvey on August 27, 2017 in Houston, Texas. Hurricane Harvey left a trail of devastation after the most powerful storm to hit the U.S. mainland in over a decade slammed into Texas, destroying homes, severing power supplies and forcing tens of thousands of residents to flee.

As the long process of recovery begins for a devastated Texas, it is time to start thinking about how rebuilding can increase the resilience of the flooded households and communities. Incorporating risk reduction measures into rebuilding can often be more cost-effective when done as part of the repair process, and it also provides an opportunity to improve how flood risks are managed.

That said, moves by the current administration could greatly complicate the process of protecting communities against escalating future losses. In 2015, President Barack Obama signed Executive Order 13960, which put in place the Federal Flood Risk Management Standard for projects built with federal dollars. Instead of the standard 100-year flood standard, the order required more rigorous construction; a higher standard but one that offered flexibility in how it was to be achieved. Projects could be built to one of three standards: the best available climate data, the 500-year flood event, or the 100-year event plus 2 or 3 additional feet depending on the type of infrastructure. The standard did not apply to private construction, and some programs, such as the National Flood Insurance Program, were exempt. President Donald Trump rescinded this order less than two weeks before Hurricane Harvey hit Texas.

The Flood Risk Management Standard was an attempt to ensure that when investing in long-lived assets, increasing flood risks were taken into account. Flood damages are on the rise, and climate scientists predict that the trend will worsen (for example, see here and here). While it was estimated that the Flood Risk Management Standard would slightly increase building costs, it would also reduce future damages. Failing to build safely now simply increases the cost to society down the road.

For example, the White House budget proposes eliminating funding for the Pre-Disaster Mitigation Grant Program, which is one of the few programs to give funds to communities for hazard mitigation in advance of a storm. Over 90 percent of federal funds for risk reduction are tied to presidential disaster declarations and provided after a disaster. This grant program is one that provides funding to smaller-scale damages in advance, although amounts are small.

Other Challenges for Risk Reduction

There are four other challenges to increasing investments in risk reduction.

First is a salience problem. Risk reduction costs money now but saves money in the future. People tend to pay attention to the cost today and fail to appreciate the savings in the future. Numerous studies, however, have shown that mitigation can often save money over the longer term (such as here and here). While in many cases it makes sense to put more emphasis on the certain and the near-term, when applying this thinking to long-lived investments, such as buildings and infrastructure, we may miss opportunities not only to save money, but to provide greater protection and less suffering in the aftermath of a disaster. The occurrence of Harvey, however, may create a window of opportunity to consider actions to lower future losses as the nation is now focusing its attention on flood risk.

Hazard mitigation costs money now, but the savings accrue over time and in the future.

Second, in both the public and private sector, risk reduction savings are not monetized and not factored into the bottom line. As such, in our accounting, mitigation always looks like an expense and never like savings. For instance, the Congressional Budget Office treats mitigation grants as an expenditure today but does not project any savings, such as from reduced disaster aid, in the future. As such, for politicians concerned about spending levels, mitigation grants seem like just another expense, as opposed to lower future losses provided by an investment. That said, hazard mitigation is often something both sides of the aisle can support as it provides much needed assistance to those in need and can lessen off-budget taxpayer spending from future disasters.

Third, with natural disaster risks we often have a problem where the costs and benefits are born by different parties—what economists call an “externality problem.” So the builder, the developer, and the local government will all see benefits from constructing cheaply in risky areas, but they are not the ones to pay the costs when a home is flooded: That falls on the homeowner and often the general taxpayer. Unless or until home buyers and local citizens demand risk reduction and mitigation policies and pay more for homes located in safer areas and built to higher standards, there is no financial incentive to alter building practices.

Finally, there may be a financing challenge. Hazard mitigation costs money now, but the savings accrue over time and in the future. Some homeowners, for example, may not have the ability to pay necessary costs upfront for mitigation measures. This may be particularly true for certain high-cost measures, such as elevating one’s home. This is where loan and grant programs can help, particularly when targeted at those who most need financial assistance or who are most at risk. For example, the Small Business Administration provides loans for disaster victims and will increase the amount of the loan to cover hazard mitigation costs.

The Flood Risk Management Standard was an Obama administration attempt to overcome some of these challenges and secure the economic benefits from risk reduction. As Congress looks toward passing supplemental legislation to fund the recovery effort in Texas after Harvey, it is an opportunity to incorporate resilience building. This was a focus of the Sandy Supplemental, and many lessons can be drawn from those programs and how those dollars were spent to improve the assistance given to the victims of this storm.

We should learn from our mistakes and plan for the future by recognizing increasing flood risks and taking the necessary actions to reduce them.

Bilal Mughal CEO of Blue Marble Microinsurance
URL: https://www.brinknews.com/flooding-and-the-economics-of-risk-reduction/
Get ahead in a rapidly changing world. Sign up for our daily newsletter. Subscribe
​​