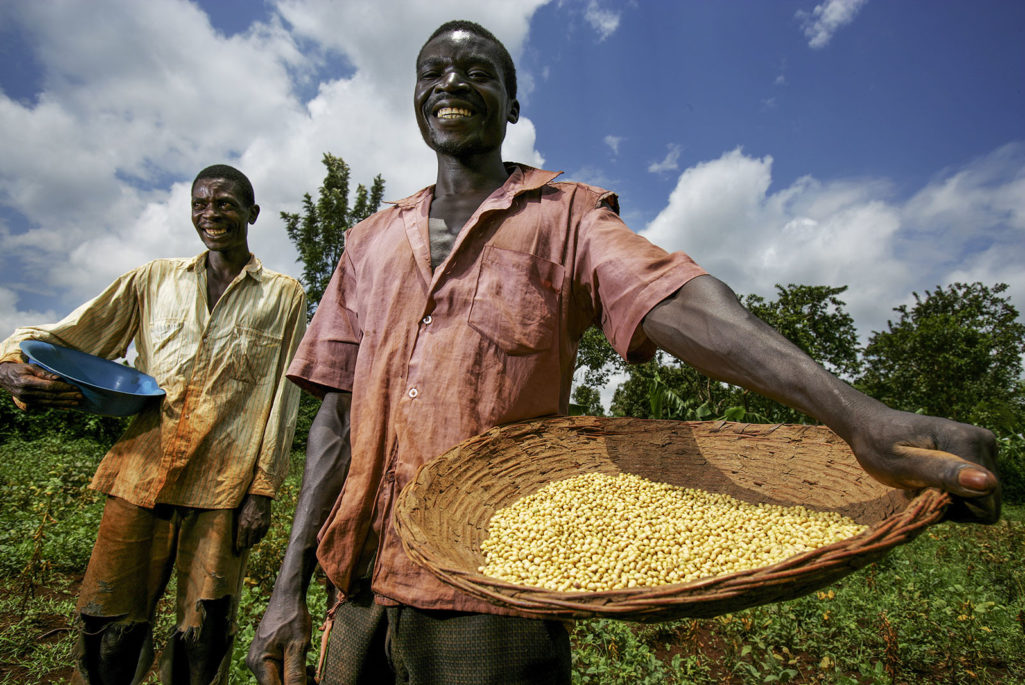 Two soy farmers stand with their product on their small plot of land in Kisumu, Kenya. Smallholder farmers like these are among those benefiting from microinsurance.

For the millions of people across the globe living on a few dollars a day, insurance is often seen as a superfluous concept. With paltry incomes barely meeting the day-to-day needs for survival, it’s no surprise that a long-term insurance safety net seems a mere luxury. But a burgeoning industry is working to change this attitude—for the well being of impoverished individuals, the communities they live in and the global economy as a whole.

Microinsurance, the protection of low-income people against specific perils in exchange for low premium payments, has emerged as a unique approach to keeping fragile livelihoods and economies afloat. Focusing on unique areas that are key to maintaining financial security in a developing country (e.g., crop and livestock protection, natural disaster insurance), along with basic health, life, and death insurance, this niche protection market has been gaining international momentum as an economic development tool over the past decade.

“In emerging markets, people are just getting above the poverty line and trying to stay there,” said Marik Brockman, of CSAA Insurance Group, told Property Casualty 360 in a 2013 interview. “Microinsurance is intended to be a safety net preventing one incident from knocking them back down below the poverty line.”

In 2008, former President Bill Clinton helped launch LeapFrog, the first global microinsurance fund, which paired 6.5 million people with low-income insurance by 2012. In 2011, the World Bank hosted Indonesia’s first Microinsurance Marketplace, aiming to attract the near 77 million Indonesians who have no financial protection. According to a 2012 study by reinsurer Munich Re, some 500 million people across the globe bought a microinsurance policy in 2011—six times the amount estimated in 2006.

“Discussions of microinsurance are usually closely linked to microfinance,” according to a World Bank report, in much the same way traditional insurance underpins lending in the developed world. “A strong link exists between MF and MI schemes, as the former have piloted many of the latter,” the report says. The linkage is natural for microfinance institutions that perceive “a demand for (an) increased risk management product that can protect both their clients’ and their own interests,” the report says.

The report outlines three reasons why microinsurance is often seen as part of a successful microfinance financial package. Microinsurance can:

1) reduce the negative impact of risky events on client’s ability to repay loans and serve as a collateral substitute, thereby helping existing clients and expanding coverage to riskier clients, 2) provide an additional financial service and source of revenue for the MFI, and therefore 3) improve the financial sustainability of the MFI.

Now, after years of organizations cautiously entering this market on their own, through collaborations with mobile technologies and local financing companies, experts have begun to join forces in hope of cementing the future of microinsurance.

“I like to call this version 2.0,” said Joan Lamm-Tennant, Global Chief Economist and Risk Strategist of Guy Carpenter and CEO-elect of a new—and yet-to-be-named—microinsurance venture incubator (MVI). “The market is now being scaled and the middle class has an easier access to technology, which is so important to our success.”

This new incubator, first announced at the January World Economic Forum annual meeting in Davos, Switzerland, is a consortium of eight global insurance companies working together to open a new market, rather than just sell a product, according to Lamm-Tennant.

“It’s profit with a purpose of getting an economy to maintain itself,” she said.

The MVI is the first of its kind in more than one area. Instead of focusing on a particular country, or specific market, the group aims to spark ten different ventures across the globe in the course of ten years. The first will be in affect by the end of 2015, Lamm-Tennant said. “We want to show that we have a long-term commitment and that there’s a sense of urgency here,” she said.

And the group isn’t relying on their own marketing know-how to set these ventures in motion. One already successful technique used in microinsurance is pairing insurance payments with a cheap smartphone plan. But instead of simply handing over new phones to developing communities, the MVI wants to make sure it translates. So, the group plans on tying in local tech partners to enable community understanding.

“We can’t just go in and teach people how we use the technology, it has to be implemented in the way that they use it,” said Lamm-Tennant, who sees this step as a future challenge. “We have to be learners first, which can be culturally hard for us.”

While the incubator is still in its early stages, its members are working long hours to build stable financial models and relationships with strategic partners in geographic areas ripe for a venture. Plus, said Lamm-Tennant, the eight groups (with a total of 180,000 employees) are learning to collaborate in a business where they’re used to competing. But it’s proving to be worth the hurdles.

“I am very, very proud of the industry, and the eight companies in particular that embrace this challenge for the social good,” she said.