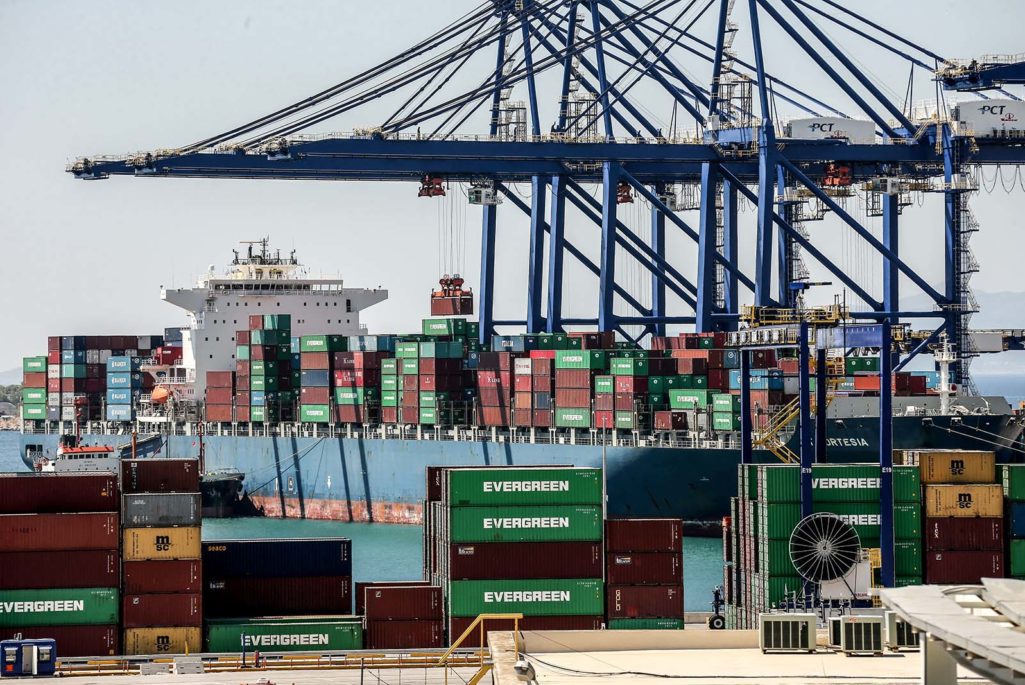 Shipping containers are stacked at the Piraeus container terminal on July 8, 2015 in Athens, Greece. Eurozone leaders have offered the Greek government one more chance to propose a viable solution of it's debt or face a possible exit from the euro.

The recent eleventh hour bailout agreement reached between Greece and its creditors over the weekend has pitted its leftist Prime Minister Alexis Tsiparis against the country’s population, which earlier this month voted down the very proposals now in front of the Greek parliament.

The effects of the debt crisis on Greece’s financial sector and overall economic health have been widely reported in the news media. The country’s failure to repay its debt has left it in economic shambles, with unemployment at about 25 percent and pension plans slashed by more than half.

But the debt crisis’ effects on other, less familiar industries have not been as widely reported. Some industries—surprisingly—have even enjoyed an uptick in activity, but, in most cases, the debt situation in Greece has affected industry negatively on a global scale.

The Luxury Fashion Industry is Exploding

“In Greece’s new economic order, Chanel is becoming more valuable than cash,” the Washington Post pithily summarized recently. Greeks who have a notable sum of money in the bank are reportedly worried that a deal with the nation’s creditors will leave their banks with no cash to show for. That’s why many wealthy Greeks are pulling their money out of their bank accounts and, in a striking juxtaposition with the country’s crumbling economy, shopping for big-name merchandise.

Louis Vuitton, the luxury leather goods maker, reported an unusual uptick in the market in Greece.

“Our Greek business is on fire,” Michael Burke, the chief executive of Louis Vuitton, told The New York Times recently. “When economies are insecure, people want to put their money into tangible assets. Last week we were up 50 percent. It’s weird.”

Weird is certainly one way to look at it, but the impulse to spend makes a reasonable degree of sense: With the country’s banks facing unpredictable futures, wealthy citizens are not eager to leave their money with unstable institutions.

For many Greeks, spending on high-luxury items isn’t just a sign of hyper-cautionary behavior.

And for many Greeks, spending on high-luxury items isn’t just a sign of hyper-cautionary behavior. The New York Post reports that many wealthy Greeks started withdrawing cash from their bank accounts as early as January, when the country’s leftist government took over parliament. And memories of Cyprus’s 2013 bailout are too fresh, with the government at the time asking citizens with more than 100,000 euros in the bank to give up nearly half their savings as part of a bailout package.

While luxury goods—especially clothes and shoes—are not generally known to appreciate in value, it is has proven an easy way for Greeks to invest money in more secure, tangible goods. And global luxury brands are thankful.

But the Shipping Industry is Starting to Worry

If there is one industry that’s nearly synonymous with Greek commerce across the centuries, it’s shipping. But, unlike the boon in luxury purchases, the backbone of the Greek maritime industry is facing an uncertain future.

On the one hand, Greek shippers have managed to keep their companies’ stock prices relatively steady despite the tumult seen elsewhere in the Greek financial sector. Many of these companies, like Costamare and the Danaos Corporation, are doing business with U.S. dollars and are listed on the New York Stock Exchange. This, for the most part, has kept Greek-owned shipping companies immune from the volatility and negative effects of the euro.

But even though stock prices are stable, the Greek government is attempting to impose a new set of taxes that’s been very poorly received by the country’s shipping magnates and industry leaders, according to recent reports.

Greek fleet owners have traditionally enjoyed low taxes on tonnage and shipments, and virtually no taxes at all on foreign business and money made abroad. Taxing these components of the shipping industry may prove a potential profit wellspring for the Greek government, but its biggest obstacle is the shipping executives themselves, who have threatened to move their companies elsewhere if proposed stricter taxes become law.

“I am in Greece because I love my country, but I won’t stay around to see my business being ruined,” a shipping executive told The Wall Street Journal.

The industry today comprises 7.5 percent of the Greek economy, while employing around 200,000 people, according to statistics in that same Wall Street Journal report. If shipping companies leave Greece in resistance to these new taxes, not only will the government lose potential profit from existing taxation, but a significant sector of the Greek labor force will become unemployed.

Smaller shipping companies in Greece are facing a tremendous deal of uncertainty as a bailout package and new taxation laws are being negotiated. These companies, unlike their larger peers, don’t have the luxury of international stock market stability. But owners of larger shipping firms are more optimistic that their industry will leave unscathed, even with threats from the government about higher taxes.

“It is business as usual,” Dimitrios Stamoudis, manager at Minerva Marine, told The Telegraph. “For national shipping companies it doesn’t impact, we can do transactions electronically and we’re working as usual.”

Food Exports are Feeling the Heat

Perhaps the country’s most consumer-facing industry, the goods that make it famous around the world, is suffering from a lack of resources and short supplies due to banking freezes.

Olive oil, feta cheese, delicacy pastries: They are beloved among domestic consumers as well as international buyers who have generally enjoyed these exports in the past without any complications.

For instance, Greece is the world’s third-largest exporter of olive oil, and the country’s food and agriculture exports last year racked up about 5.5 billion euros, a substantial part of the nation’s overall GDP, according to news reports.

But government-imposed freezes in electronic money transactions have left a formerly active import-export relationship between Greece and the U.S. in a gridlock. Greek exporters are unable to pay their suppliers and many of them are demanding cash in advance in order to perform business as usual.

The inability of Greek food exporters to pay for supplies has had an effect on local grocery stores in the United States, where olives and feta cheese are so frequently a staple in an increasingly popular Mediterranean diet.

With storefront inventories whittling away, grocery stores—especially those specializing in Mediterranean products—may soon find themselves in the position of needing to reorganize their relationships with suppliers and adapt their entire inventories to accommodate halted exports from Greece.

The debt crisis in Greece is far from resolved; the Greek parliament is facing a compressed timeline to pass the needed legislation demanded by the terms of the bailout agreement. Meanwhile, effects of the crisis echo far beyond the storefronts and shores of Greece and ring hollow for a handful of industries that previously enjoyed global reach.