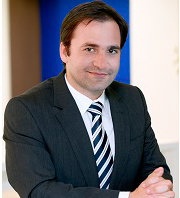 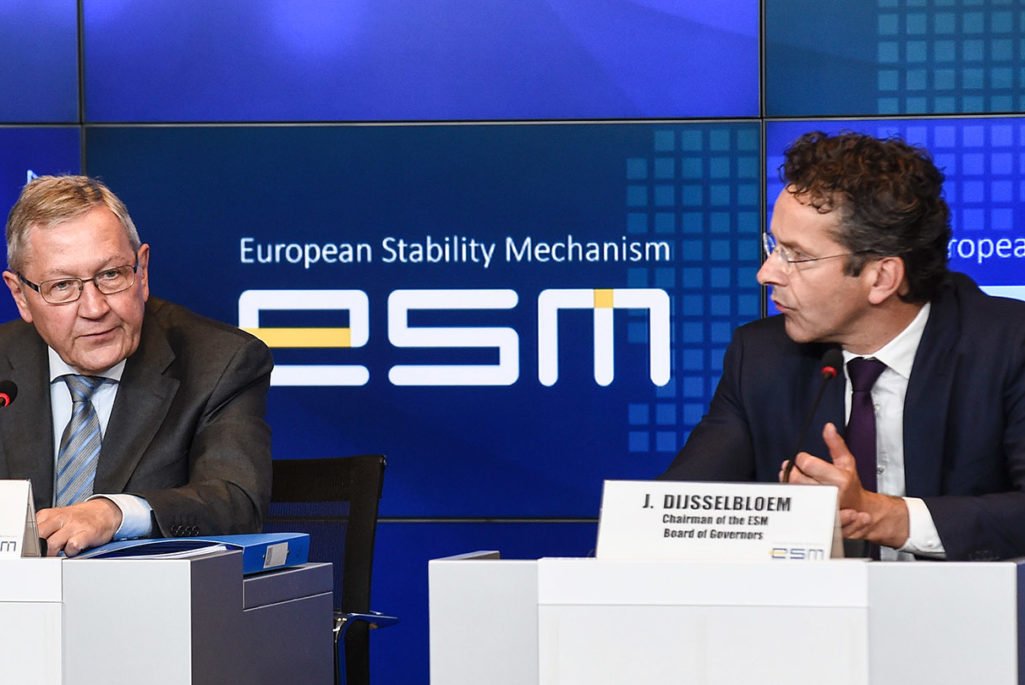 European Stability Mechanism (ESM) Managing Director Klaus Regling (L) and Dutch Finance Minister and President of Eurogroup, Jeroen Dijsselbloem, give a press conference after an annual meeting of the ESM Board of Governors ahead of the Eurogroup meeting in Luxembourg on June 16, 2016.

I was lucky; it happens only once every 20 years that a new international financial institution (IFI) is created. The World Bank and International Monetary Fund were established after World War II in 1945, unrest in Asia and escalation of the Vietnam War led to the creation of the Asian Development Bank (ADB) in 1966 and the fall of the Soviet Union led to the creation of the European Bank for Reconstruction and Development (EBRD) in 1991.* In 2010, at the verge of the most severe financial crisis in 80 years, the European Financial Stability Facility (EFSF) and later the European Stability Mechanism (ESM) were created.

I was there from the very start in May 2010. If you were going to build a new international financial institution with a balance sheet of over $1 trillion, how would you build that in the 21st century?

Building an international financial institution from scratch in the 21st century has some advantages, but it requires bold leadership in order to make the right decisions, find the right business model and create an institution that is attractive to the most recent entrants to the workforce—the millennials.

Traditionally, public sector institutions have been seen as bureaucratic and slow-moving, but establishing a new “startup” institution with a mandate to solve crises rapidly disrupts this idea and allows for the shaping of an institution that is modern, attractive and ahead of others. There are nine building blocks that we relied on to build the public sector of the future.

1. Build a very lean model—you don’t need to be an expert in everything. At the inception of the EFSF, we started with a lean operating model: 12 staff members, front offices outsourced to the German Debt Agency and support services to the European Investment Bank.

In 2012, the permanent ESM was created. We insourced the front offices (funding, investments, lending and economics) and some of the strategic support functions (HR, technology, facilities strategy and risk management), but outsourced the majority of the operational and non- strategic functions. We were the first financial institution globally to use a fully cloud-based trading system (software-as-a-service). We also did not see a need to run a single server at our facilities—this is all outsourced to our strategic technology partner.

Once we took that step, we looked critically at our business model and saw a wide range of services that could be fully outsourced, such as the back office to a large financial institution, payroll to a financial services firm and accounting to a peer IFI. This allows us to run a $1 trillion-plus combined balance sheet with solely 160 staff members. The lean operating model means that all strategic and decision-making functions are insourced, but all functions in which we don’t have a comparative advantage and which don’t require us to be experts (e.g. IT architecture and infrastructure) are fully outsourced. This gives us the opportunity to be scalable (up and down), cost-efficient and focus on our core mandate.

2. Recruit excellent staff. Once the structure was set up, bringing the best people on board to do the job was crucial. The EFSF and ESM were fire-fighting in five crisis-stricken countries (Greece, Portugal, Spain, Ireland and Cyprus), and so we had to attract talented staff. We had one advantage: Our work was front-page news in most of the financial press.

We started by sending letters to the CEOs of the largest financial institutions in the world, the governors of the euro area central banks and presidents of the largest IFIs (e.g. World Bank, International Monetary Fund and European Investment Bank). We asked them to send us some of their best staff as temporary hires. We established on-campus recruitment programs with the world’s top universities and, together with a consulting firm, we ran a student lab at a top business school. In the fight for talent, we often compete with investment banks, consultancies and start-ups; however, there is one thing we can offer that none of these competitors can: a unique mission.

3. Give talent a mission. Contributing to saving the euro as a currency, helping Europe navigate the crisis and making the continent a better place for coming generations comprise an irresistible, almost impossible-to-compete-with mission for our staff. The vast majority joined the institution for this unique mission. They come, stay and move on, driven by this mandate. Giving them such an important mission means they are motivated every day, which is needed if they have to spend weeks negotiating with counterparts in other countries.

4. Make the institution flexible. “Once you create them, they never disappear and only grow.” This is a common thought about public institutions. It is wrong, though: Public sector institutions need to be scalable and cost-conscious. They need to grow modestly when needed and shrink when necessary. They should also not lock in colleagues by offering lifetime employment, which traditional public sector institutions do.

Instead, they should allow colleagues to build up a competitive skill set that is attractive to the next employer. We have had staff turnover of 10 to 12 percent, compared to 2 to 3 percent for the public sector and 10 to 15 percent for the financial services private sector. More than half of our staff exits are moves to the private sector. The public sector of the future should be seen as a springboard for staffers’ careers.

5. Ensure you are at the forefront of technology. The next workforce generation, millennials, differ from their predecessors. Compared to previous generations, they are the first group to be full technology natives. From a young age, they grew up with technology. This is easy to say for me, as I am one of them. In order to make the institution appealing, we created our own internal social media, allowed staff to connect and work from anywhere through mobile technology (phone, tablet and other devices) and participate in meetings through video conferencing. We are a digital organization at heart.

6. Attractive work environment. In the 21st century, offices need to look and feel attractive. Chic, large and “single-person” workspaces are passé; the next generation is happy to share offices (which encourages peer learning and a social element of work) and wants their workspace to look “startup-like.” Technology is integrated throughout the working environment. Transparent open spaces, attractive seating areas, an exercise area and power nap stations all reinforce productivity and efficiency. The office needs to look modern, appealing and youthful, the beauty is that this can be done in a very cost-effective way.

7. Create a strong culture. At the inception of the institution, we recruited staff who were willing to give everything. They came from more than 30 nationalities, two-thirds were from the private sector and one-third from the public sector, with a colorful palette of educational backgrounds. We had to “glue” them all together.

Within our first year, we started working on our internal culture. We used coaches early on and created seven core values. We described ourselves as a “creative, dynamic, diverse, committed, young organization,” a phrase that very few traditional public sector institutions will use. This strong internal culture allows us to be agile in a politically delicate and high-pressure environment, which comes with the work as one of the world’s largest crisis resolution mechanisms.

8. Excel in delivery. All the operating model and internal culture work is great internally, but our shareholders evaluate us by the job done externally: How fast can we disburse cash to countries in difficulty, how do we raise vast amounts of money in the capital markets and how do we come up with new creative crisis solutions? Well, we delivered and we delivered big time. In the first four years, we disbursed €233 billion, three times more than the IMF during the same period. We issued €50-€80 billion in bills and bonds annually, making us the fifth largest euro-denominated issuer globally. We also manage €80 billion in paid-in capital, which we trade on a daily basis. This is the largest paid-in capital worldwide of all IFIs, such as the World Bank and Asian Development Bank.

9. Inspire others. We are not here to compete with peers; we are here to deliver on our mandate, motivate our staff and inspire others on what a successful public sector institution of the future could look like. We are grateful to all the IFIs for their help in getting us established and the opportunity to learn from their difficulties. We are humbled that today we can serve as examples for them in various areas. Many of our peers come to visit us and observe our “way of working.” We encourage our staff to go out and share how it feels to work for a modern and innovative public sector institution of the future.

The ideas above can serve as building blocks for many new (semi-) public sector institutions that are being created. We have helped to inspire some of them already. There are some regional financial initiatives that are taking off, such as ASEAN+3 Macroeconomic Research Office (AMRO) in Singapore. The simple rules above can help build a 21st century institution and enthuse current staff and millennials, which will form the future of the public sector.

Looking back at the last six years, there is one moment that served as a spark for the above. In my very first week at the institution, I was on a flight with the managing director, Klaus Regling, from Luxembourg to Munich. I told him about my initial idea to build a “Google of the public sector.” He, and later my team, challenged me and asked: “Why Google? Why can’t we be better than Google and inspire others, including Google?” And they were completely right.

Kalin Anev Janse is secretary general of the European Stability Mechanism and European Financial Stability Facility. He is also a member of the Management Board responsible for Funding, Asset Liability Management and Lending. He previously worked for the European Investment Bank, where one of his tasks was to coordinate setting up the EFSF. Prior to this, he worked as a Corporate Finance and Strategy Consultant for McKinsey & Company in the Netherlands.