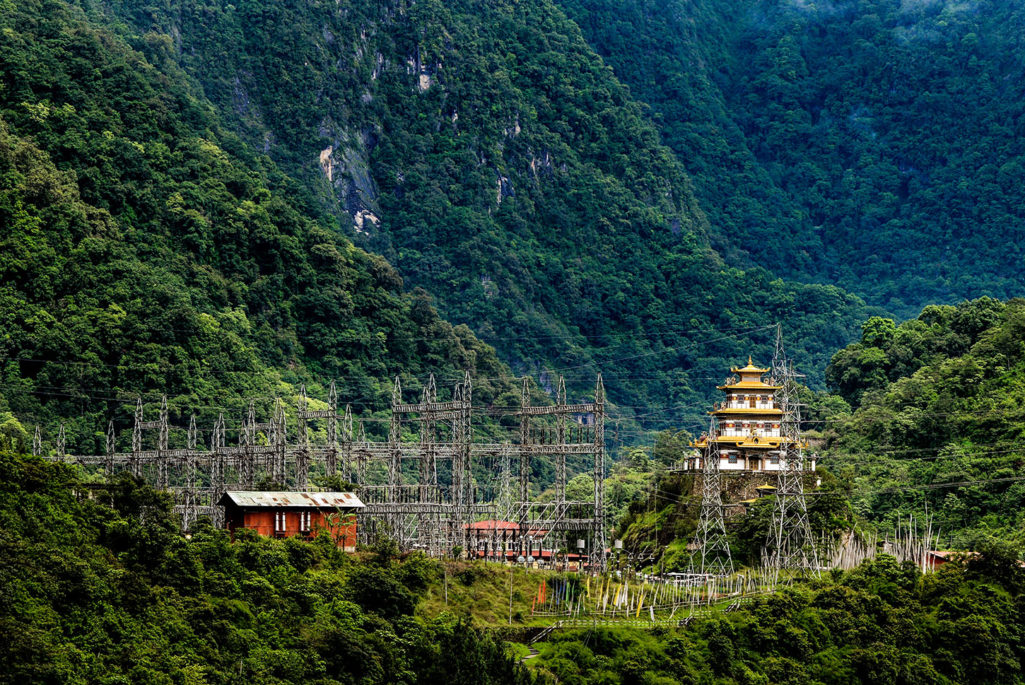 A Buddhist temple sits near an electricity grid main of the Chukha hydro power station in south-eastern Bhutan. Bhutan has set its sights on becoming an unlikely energy powerhouse thanks to its abundant winding rivers. Hydropower plants have already harnessed the country's water flows to light up nearly every Bhutanese home, generating electricity that is sent to remote villages by cables strung through rugged mountain terrain.

According to a recent UN report, “48 of the world’s most vulnerable countries will lose ground in economic development and face increasing levels of poverty” between now and 2030. The 2016 report of the United Nations Conference on Trade and Development on Least Developed Countries (LDCs)* presents some worrisome facts.

The UN notes that while the 48 LDCs—of which nine are in Asia—comprise around 880 million people (or 12 percent of the world population) they face such serious structural barriers to growth that they account for less than 2 percent of world GDP and around 1 percent of world trade.

Because the development performance of LDCs has been so disappointing, only four have graduated to developing country status in the time since the category was established in 1971. They are Botswana (1994), Cape Verde (2007), Maldives (2011) and Samoa (2014). None of the countries is in Asia.

Progress is so slow that only 16 LDCs are expected to escape from this low development category by 2025. In Asia, these countries are likely to include Afghanistan, Bangladesh, Bhutan, Laos, Myanmar, Nepal and Yemen. Among them, Bangladesh, Bhutan, Laos, Myanmar, and Nepal are expected to do better and achieve broad-based development, diversification and structural economic transformation. And their foundations are likely to be more robust for continued development.

LDCs are classified according to their export specialization, or type of exports that account for at least 45 percent of total exports of goods and services during the 2013-2015 period. Yemen is considered to be a fuel exporter; Bangladesh, Bhutan and Cambodia are manufacturing exporters; Laos and Myanmar are mixed exporters; and Afghanistan and Nepal are service exporters.

Hydropower as a Gateway to Development

In the case of Bhutan, the report has some shortcomings. It ignores that Bhutan has been an important exporter of hydroelectricity to India. Between 1997 and 2002, electricity sales to India contributed to approximately 45 percent of the country’s gross national revenue.

This has translated, and will continue to translate, into better quality of life for the population, including access to basic services, improved health and education, and industrial and commercial developments.

Hydropower has become the backbone of Bhutan’s economy. Thanks to electricity sales, Bhutan’s per capita GDP has become one of the highest in South Asia. GDP was $2,668 in 2015 (equivalent to 21 percent of the world average), compared to $1,615 in 2006.

The annual GDP growth estimated for Bhutan for 2016 was 6.4 percent—from 3.6 percent in 2013. This would not have been possible without rapid growth in industry and services, much of which has resulted from the availability of electricity. At present, Bhutan is the only country in South Asia that generates more electricity than its national needs.

If properly managed, energy cooperation could contribute to improved quality of life and development in Asia.

Nepal could also benefit tremendously if it developed a similar scheme with its neighbor, India. For this to happen, however, decades of mistrust between the two countries would have to be overcome.

Nepal has 2.3 percent of the world’s water resources and its mountainous topography and free-flowing, perennial rivers make for the right ingredients for hydropower development. The country has theoretical hydropower potential of 83,000 MW, but so far, less than 2 percent has been realized. If this potential is developed sustainably in the coming decades, it could revolutionize the nation’s economy.

As discussed in the analysis on Nepal within the Ganges-Brahmaputra-Meghna Basin framework, Malla, Shrestha and Sainju state that, “in the Ganges-Brahmaputra-Meghna Region, water resources, natural diversity and phenomenal hydropower potential make it one of the greatest natural resource region[s].” In the region, the countries have developed mainly bilateral cooperation that has created a climate of mistrust. If this were to be overcome, the region could formulate and implement a vision that would benefit all four countries, and part of this vision could be based on hydropower development.

Nepal’s electricity can be sold to its energy-hungry neighbors, India and Bangladesh. Considering Nepal’s per capita income of $689 in 2015, which is equivalent to 5 percent of the world average, this should be a welcome opportunity.

An initiative launched within the South Asian Association for Regional Cooperation, called the BBIN (for Bangladesh, Bhutan, India and Nepal), aims at better cooperation on electricity and connectivity with India.

Current discussion among these countries could lead to exciting developments for the subregion.

If properly planned and managed—and mindful of some of the countries’ specific social and economic concerns—energy cooperation could contribute to improved quality of life and overall development in all four countries.

Unfortunately, because of serious differences between India and Pakistan, it does not seem that Pakistan would benefit from either regional electricity grid connectivity or trade in the near future within the BBIN initiative.

According to the Asian Development Bank, there is hope in the region because of a number of projects. There are several cross-border electricity transmission interconnections planned or ongoing, such as the Bhutan-India additional grid reinforcement.

An initial step between India and Nepal is the 1,000 MW interconnection, which is already working, and which currently enables Nepal to import 80 MW at 132 kilovolts from India. Other transmission links are under construction between Nepal and India, as well as between Bangladesh and India.

In addition, there is the proposed India-Sri Lanka high voltage direct current transmission link with a submarine cable component; and a few projects including India-Pakistan.

The capacity of each of these six transmission interconnections ranges from 250 MW to 2100 MW, and would cost between $140 million to $1 billion to construct.

South Asian countries can accelerate their economic development and graduate from the LDC category by working with each other. The region has more poor people than all the countries in sub-Saharan Africa put together. Their economic futures could change radically through collaboration between the countries in the region, lifting millions of people out of poverty, and two small Himalayan states could be at the center of it all.

A version of this piece first appeared in The Conversation.