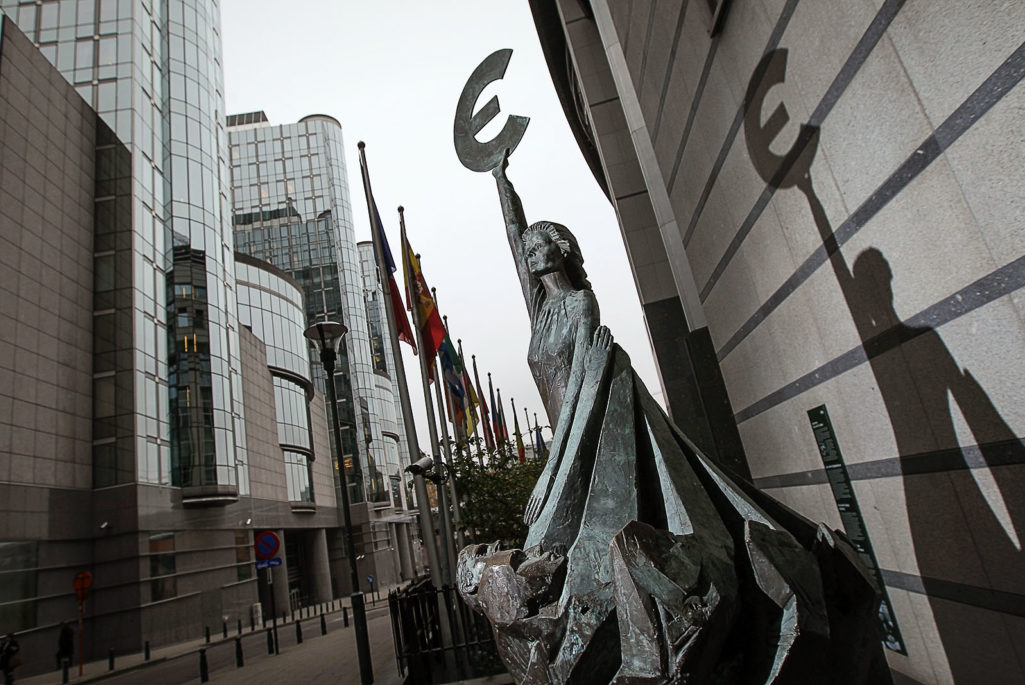 A sculpture of a woman holding up the symbol of the Euro stands outside the European Parliament building in Brussels, Belgium.

Geopolitical conflict is the main thread tying together the global economy and weaving a risk narrative worthy of a suspense novel. That’s the sense one gets reading through this year’s annual list of top risks from the Eurasia Group.

The list “reads a little more like a cohesive novel and a little less like ten distinct risks that are in different parts of the world,” said Ian Bremmer, president of the Eurasia Group, during an interview with BRINK. “And that is part of the worry, that we are entering a period of time where the geopolitical environment itself is much more dangerous.”

In fact, Bremmer uses the word “foreboding” to describe the current geopolitical state of affairs, in which the “political conflict among the world’s great powers is in play more than at any time since the end of the Cold War,” he writes in the report’s introduction.

While Bremmer said that today’s world is “reasonably comfortable,” he added that “geopolitically, the hairs on the back of my neck are standing up right now. There are too many areas where the creative destruction of the geopolitical environments are likely to lead to tears.”

BRINK: The “politics of Europe” is your number one global risk. Why did it make the top spot?

Bremmer: Russia could have been number one [Editor: it was number two], but we didn’t put it there for two reasons. First, the size of the Russia economy is pretty marginal. While I think that the worst-case outcomes from Russia are disastrous, they aren’t disastrous from a global market perspective. And second, to the extent that things do get really ugly in Russia, the part of the world that gets most affected is Europe, so Russia actually plays into the Europe risk.

The Europe risk is about the politics of Europe in every manifestation, all of which look bad. It’s really hard to find any political development in Europe that’s positive right now. In all of the European states you have a reversion to the lowest common denominator nationally. You have strong finger pointing between core and periphery; you have the growth of populist parties, some of them will probably end up in office in Greece and Spain. In other cases they’ll be changing the politics of the establishment parties as you see in the UK, in France, and in Germany.

And then you have a geopolitical environment externally that’s much more challenging, not just because of Russia, but because of what’s happening in the Middle East and the refugee crisis and that leading to anti-immigrant sentiment across Europe.

There’s no question that the economy in Europe is better than it was during the Eurozone crisis. But the politics are so bad and it’s hard to image that that’s not going to cause trouble over 2015. Not necessarily leading to a Greek exit—I don’t think I buy that—but I think the recrimination between let’s say Greece and Germany, between the periphery and Germany, the unwillingness of the Germans to display flexibility. The readiness of many of the peripheral states to roll back much of their austerity policies that have hit the people so hard over the past years. Clearly this is going to make the Euro drop, it’s going to make Europe seem a worse bet from an investment perspective. It’s going to widen out spreads on a lot of these European bonds that many people are concerned aren’t going to be worth what they’ve been printed on.

In the last three years the EU has gotten stronger, but the trajectory now is toward unraveling.

BRINK: How far back do you have to peel the onion to start seeing the unraveling of the EU?

Bremmer: I wouldn’t make that call this year. But there’s a difference between collapse and unraveling. In the last three years the EU has gotten stronger, but the trajectory now is toward unraveling. It is a weakening of European institutions and a weakening of the consensus, however narrow, that has developed between the core and periphery. It is a greater likelihood that when Britain has a referendum—in or out on the EU—that they choose out. Those are all things that are absolutely growing in this environment.

BRINK: The “weaponization of finance” registered fourth on your list. Can you explain what that means?

Bremmer: Of all things on the report, that’s the one that has probably gotten the most attention. What’s behind it is, look at the traditional ways that America expressed power in the 20th century: A nuclear arsenal; the world’s largest military; a global navy; bases all over the world; well-trained soldiers; alliances with interoperability of weapons systems; NATO. That seems kind of quaint now. The 21st century is very different. President Obama has made very clear that we don’t like the idea of boots on the ground and a lot of Americans happen to agree with that.

So how is America expressing power? It’s doing so with drones and surveillance, and most importantly, with the dollar. The ability of the United States to use the dollar and financial access as both a carrot and a stick, to advance American national security interests, and in a host of different places and ways with both adversaries and allies, is actually very strong.

And while it may not be a cohesive strategy—I don’t believe there’s anyone in the White House that has said, “We’re going to use the weaponization of finance as our principle policy instrument to advance American national security policy,”—I do think we’ve moved to that direction.

BRINK: How does this all this play into the rise of strategic sectors?

Bremmer: It plays into strategic sectors in part because the U.S. itself is expressing its power more unilaterally, all the three things I mentioned—the weaponization of finance, drones, and surveillance—are all things the United States can do unilaterally. We don’t really need allies for it and for most of what we’re doing we’re not asking permission.

One of the more important developments in the creation of strategic sectors has precisely been that the United States has been developing the world’s most effective military industry technological complex and that requires a whole bunch of American companies to effectively be allies of the U.S. government, handmaidens in supporting that policy and, by the way, not being transparent with others internationally in what they’re doing.

You could say that’s an advantage for those companies in the United States, but it’s clearly a disadvantage for the companies in other countries that aren’t very pleased about U.S. policies. That situation going to cause regulatory challenges and is already. In Europe, for example, we’re definitely seeing that. And I think one of the big things that comes through the entire report is how the transatlantic relationship is becoming much more challenging.

The transatlantic relationship was the bedrock of the American post-war order and it’s very interesting that it’s now changing and maybe that’s another thing that helps to create the sense of geopolitical foreboding that I have.

BRINK: How do weak incumbents play into the global risk scenario?

Bremmer: This is a very specific risk and an interesting development that actually does come from 2014 in a sense because all of these emerging markets were having elections. In many of the emerging markets you actually have incumbents winning and those incumbents are weak. They are less popular than they used to be, they are in a more difficult economic environment, and they’re not going to have the tools to respond to it very well. That’s true in South Africa, Brazil, Colombia and Turkey. And it probably will be true in Nigeria once they have elections there shortly. It’s these five major emerging markets, all of which have these repeat term statesmen who have lost a lot of political capital and don’t have the ability to engage in the kind of policy reforms that their economies, frankly, really demand.

BRINK: One of the “red herrings” in the report was the concern over petrostates and how the slide in oil prices would negatively affect them.

Bremmer: With oil prices down at $50 a barrel, there are lots of things that low oil prices affect: They certainly affect how countries deal with each other, they change the global balance of power. But what they don’t do is suddenly create massive instability in these petrostates. So people think, “Oh my God, Putin is going to be crushed because oil’s at $50.” No he’s not. He’s going to be angrier, but he’s not going to be crushed.

Saudi Arabia—same thing. They have plenty of money, the Gulf states all do. Others will say, “The Iranians are going to be forced to do a deal with the Americans because oil is going down,” I don’t see it actually, I think a deal is relatively unlikely.

Venezuela is an exception because if oil stays at $50 they’re probably defaulting at some point, maybe not 2015 but maybe 2016.