Is COVID-19 Accelerating a Shift of Service Jobs to the Developing World?

Richard Baldwin
Author of The Globotics Upheaval: Globalization, Robotics, and the Future of Work 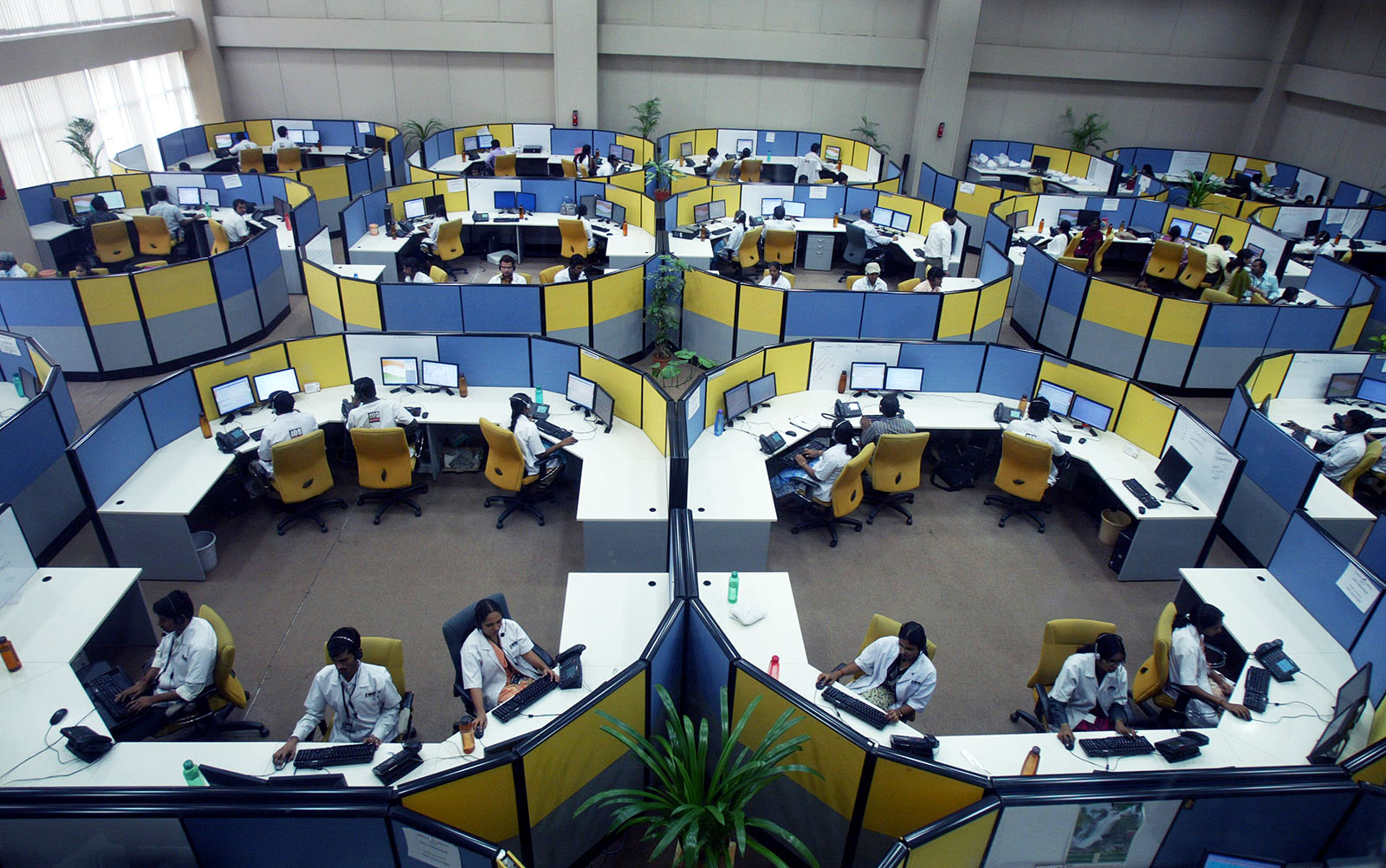 Staff work at a call center in Hyderabad. Services are less difficult to develop than a manufacturing sector because you don't need ports and well-functioning infrastructure.

As well as boosting working from home, COVID-19 is likely to increase remote working across borders. Technologies like Zoom and Slack make it easier for companies in the developed world to export service sector jobs to the developing world, where labor is cheaper. In his book called The Globotics Upheaval: Globalization, Robotics, and the Future of Work, Richard Baldwin describes how “telemigration” will become a major economic trend.

BALDWIN: When you’re working in some sort of virtual office, how far you are dispersed geographically doesn’t actually make that much difference; whether you’re in another suburb, another state or another country doesn’t really change that much. We’re all kind of working in virtual offices now.

BRINK: Obviously the outsourcing of certain services, like call centers, has been going on for several years now. Do you see telemigration as an extension of that or a new shift in the economy?

BALDWIN: With outsourcing, you’re taking a bundle of work and sending it to workers elsewhere who do something and send it back to you. Sending a PowerPoint presentation to Poland to get it jazzed up is an example of asynchronous production in a service value chain.

I view telemigration much more as working from home when home is abroad. You have people going to this virtual office and participating in this team — some of whom are overseas — so it is much closer to the working from home that we’ve all learned to deal with over the last few months.

The Scale of Disruption

BRINK: Can you give us a sense of how disruptive this will be? What sort of scale are you thinking of?

BALDWIN: Well, there was a famous paper, released just a few months ago, by Jonathan Dingel and Brent Neiman at Chicago Booth school. They estimated that something like 40% of American jobs could be done from home with very little disruption.

Now, the number that could then actually be done abroad would depend upon what you mean by “abroad.” If you’re sending it to Canada — probably Canadians aren’t that much different than Americans — most of those jobs could be done from Canada. But if you’re talking about sending it to a place that has a very different culture and history and language, it might be much less. But still, it’s a percentage point with double digits, for sure, that’s where I would put it.

Digital technology is reducing the difficulty of using labor that’s sitting in a different country. The head of a law firm in London told me that they were now outsourcing 20% of their legal work to what he called high education/low-wage countries, like Kenya and South Africa. In places where the wage gaps are the largest, there also tends to be some standardization of, say, journalism or accountancy or law or financial advice. So the standards aren’t that different, but the price difference for financial analysts, for instance, are radically different — 20 times as much in richer countries than in poorer countries.

The Lack of a Global Standard

BRINK: Is there a risk of different standards occurring in that case? So, if you’ve got a doctor giving telemedicine advice from Bangladesh, it could be very different to the advice that someone might get from a doctor from Canada, right?

BALDWIN: Yes. That is a big issue, and office workers in richer countries will get very upset about this, and they’re going to use regulations to limit it or slow it down. For example, you forbid Kenyan doctors from providing advice in England. I think the way it would end up is that the Kenyan doctor would do tasks that weren’t patient-focused, perhaps helping the doctors take notes or sort through blood tests.

Until recently, value chains in services were all integrated and done more or less in the same building, or in the same company, but digital technology — and this is not just internationally but nationally— disintegrated that.

The reason people make things in developing countries is because of low wages, and with telemigration, they can work from home directly, which will raise their living standards.

Different bits of the service value chain are being done by people who aren’t in the same company and aren’t necessarily in the same location. So, for example, legal advice is heavily regulated as long as you’re talking to a client, but the people who prepare your brief and look through the contracts, they aren’t regulated at the same level.

A lot of this stuff won’t be consumer facing. It’ll be, in essence, helping consumer-facing professionals and office people do things.

The Impact on the Developing World

BRINK: Do you see this as a big boon for the developing world?

BALDWIN: Yes, very much. I wrote a paper, published in September 2019, with professor Rikard Forslid of the University of Stockholm, which concluded that automation is making services freely traded. We think that future development models will look more like India and less like China. Services are less difficult to develop than a manufacturing sector because you don’t need ports and well-functioning infrastructure. All you need is an internet connection and some sort of qualifications, and you’re off to the races.

Countries like Argentina, Uruguay, Paraguay and Brazil all have very qualified professionals who are radically underpaid by Northern European standards. In my profession — economics — they often have Ph.D.s from exactly the same background that I have, but working for one-20th of the wage. That’s the kind of thing that drives it. So yes, I think it will be a big boon.

I think it will be very good for middle-class people in middle-income countries, who have recognizable skills and the connectivity they need to sell it.

BRINK: This could have a significant deflationary effect on the cost of these services.

BALDWIN: Absolutely. Just as we saw with goods over the last 25 years, emerging-market manufacturing held down the price of goods. There’s been research showing that the inflation rate over the nineties and 2010s might have been one percentage point or half of a percentage point higher per year, had it not been for this deflationary impact of falling goods prices, some combination of prices and quality.

Right now in non-traded services, which is most services in the United States, the prices are not constrained by international competition, but as work from home starts to include people sitting abroad, there will be a pressure on keeping the wages from rising too much and perhaps falling as well.

It is one of the classic ways of cutting costs, and COVID-19 gives them the perfect excuse to substitute online workers that come from lower wage countries. Once one person starts doing it, pretty much everybody has to do it to maintain a competitive edge.

Effect on Patterns of Migration

BRINK: If, as you suggest, this creates a lot of opportunities and jobs for people in the developing world, could that impact migratory practices, because perhaps people might not need to leave to find work?

BALDWIN: Actually, there’s a classic proposition in trade theory that trade in goods is a substitute for trade in people, because, in fact, goods are just a veil for the labor services of people. So that is exactly right.

The reason people make things in developing countries is because of low wages, but due to the non-tradability of services, people had to go to factories, put their services into goods, put the goods on boats and send them to America.

With telemigration, they can work from home directly, which will raise their living standards, even if it challenges the living standards in the rich countries. So it is a substitute for migration.

Author of The Globotics Upheaval: Globalization, Robotics, and the Future of Work @BaldwinRE

Richard Baldwin is a professor of international economics at the Graduate Institute in Geneva and founder and editor of the economic policy portal, VoxEU.org. His latest book is The Globotics Upheaval: Globalization, Robotics and the Future of Work (2019 Oxford University Press).