Is Vietnam the Next Growth Story in Asia? 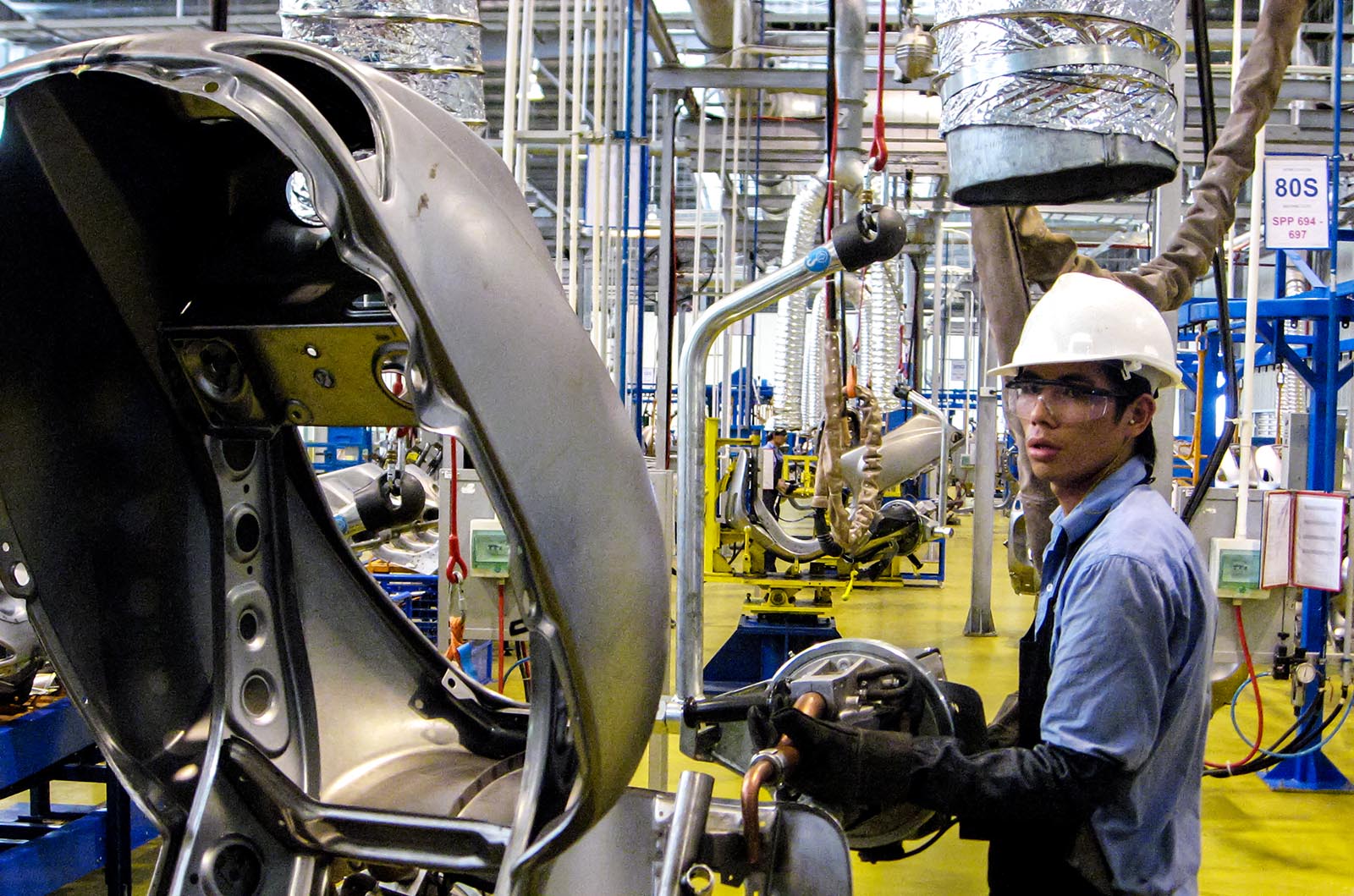 A worker installs part of a new car inside the Binh Xuyen industrial park in Vietnam. The country is one of the fastest-growing Asian economies.

Vietnam has registered rapid economic growth of more than 6 percent annually over the past three decades and is considered one of the fastest growing Asian economies. To its advantage, Vietnam boasts a young and literate population of about 93 million people, relative political and economic stability and strong foreign direct investment opportunities.

Tertiary education and enrollment ratios in Vietnam have witnessed healthy gains—from an approximate 10 percent of the population in the year 2000 to over 30 percent currently. In a comparison of three countries in the region, Vietnam outperforms India and is second only to China when it comes to enrollment in higher education. An additional competitive advantage that Vietnam offers is a young population, with a majority below the age of 35. In developed countries, the median population age is typically over 40.

Manufacturing Attracts the Bulk of FDI

FDI has been a key driver for Vietnam’s growth. Since 2010, when it displaced the real estate sector from pole position, the bulk of FDI has been directed toward manufacturing. Vietnam offers skilled, low-cost labor, and its proximity to global supply chains makes it a valuable consideration for foreign businesses. Its information technology manufacturing sector has witnessed steady FDI inflows, which, for the most part, have been on account of Korea, Japan and Taiwan’s push to establish manufacturing bases outside of China. Considering China’s rising labor cost, it is expected that Vietnam will continue to benefit from this phenomenon.

Vietnam has taken significant steps to enable this. On the policy side, signing free trade agreements has been prioritized, and the country currently boasts of 17 FTAs that are either implemented already or being negotiated. In the World Bank’s Doing Business 2018 rankings, Vietnam climbed 14 places to be ranked 68 in the world. Along with Indonesia, it has implemented the most reforms (39 reforms) globally in the past 15 years.

Growth Has Been Trickling Down

The Vietnamese economy has received significant FDI, and consequently, the economy as a whole has been vibrant. This has also resulted in reduced incidence of poverty and improvements in welfare. The poverty rate (percentage of households earning less than $1.90 a day) has fallen sharply from more than 40 percent in the late 1990s to merely 2 percent in 2014. The report highlights that “in a single generation, Vietnam has gone from one of the world’s poorest countries to leapfrogging into middle-income status.” The country now has a large middle class that serves as a sizable consumer base. Key sectors that have benefitted include consumer staples and discretionary-related industries (such as modern grocery retail and jewelry), as well as the health care sector.

It is imperative that foreign investors closely analyze macroeconomic and social stability prior to investing in Vietnam. “Historically, Vietnam’s growth has been characterized by boom and bust cycles. Massive credit growth led to asset bubbles, which later collapsed as credit growth pushed up inflation,” the report says. Following the global financial crisis in 2009-2010, the government over-stimulated the economy, resulting in a staggering 25 percent inflation in 2011, along with the Vietnamese dong depreciating by over 25 percent between 2009 and 2011.

However, since 2012, the government has enacted corrective measures and encouraged macroeconomic certainty and predictability. A stable macro environment will instill confidence in investors, resulting in higher capital expenditures and investments from businesses while ensuring robust domestic consumption.

Asia’s Next Growth Story if Risks Can Be Mitigated

Over the past few years, Vietnam has attempted to make many structural changes, and the results of these initiatives can be gauged from the declining poverty rate, the expanding middle class and the growing share of youth pursuing higher education.

Despite the economic progress Vietnam has witnessed over the past three decades, there remain various risks to doing business in Vietnam that executives are concerned about, as the Global Risks Report 2018 found. These include man-made environmental crises at No. 1, followed by fiscal crisis, illicit trade, the possibility of interstate conflict and potential cyberattack.

Note: WEF Executive Opinion Survey (~12,400 responses worldwide). Results are based on 2,477 responses across the region. Respondents could choose up to five risks which they viewed as being most important for doing business in their country. Top regional risks are calculated as the average across all countries of the proportion of respondents in each country identifying each risk as one of their five choices.
Source: World Economic Forum, Global Risks Report 2018, MMC analysis

Additionally, Mirae points out geopolitical risk (for example, over the South China Sea) and risks related to the trade landscape, particularly in the form of trade protectionism. It adds in its report, however, that these challenges notwithstanding, the favorable structural developments seen in Vietnam appear to be long term. These should help buttress future growth even in the face of risk.