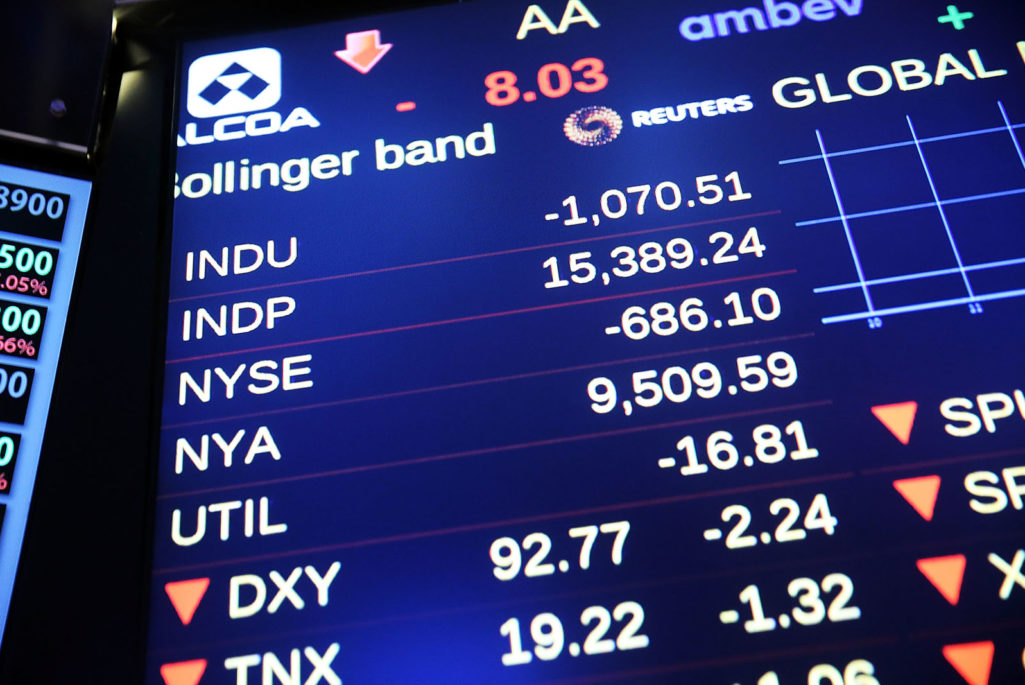 A screen on the floor of the New York Stock Exchange shows the the Dow Jones industrial average briefly dropping over 1000 points in morning trading on August 24, 2015. As the global economy continues to react from events in China, markets dropped significantly around the world.

Man-made threats are responsible for nearly a third of the estimated risk to the world’s economic output, according to a recent report.

“Based on original research by the Cambridge Centre for Risk Studies at the University of Cambridge Judge Business School, the Index shows how governments, businesses and communities are highly exposed to systemic, catastrophic shocks and could do more to mitigate risk and improve resilience,” says Lloyd’s of London in the introduction to its City Risk Index report.

The Index examines 300 of the world’s most significant cities, which account for about half of the world’s GDP. Over the next 10 years these cities will produce about $300 trillion of economic output. According to the Cambridge study, over the next ten years a range of 23 potential catastrophes will take out $5.5 trillion worth of economic output. (Editor’s note: the Lloyd’s Index uses a modified version of the original Cambridge study and catalogs 18 threats, putting a total of $4.56 trillion GDP at risk.)

The Index breaks down each city’s unique risk profile. Each city is vulnerable to a particular set of threats and the potential for economic disruption differs from city to city. “Natural catastrophe risk drives localized risk differences between cities, with tropical windstorm being a major driver for many of the cities in the top tiers, and six of the top ten having earthquake as an important component o f their risk,” Cambridge says. “Financial risks and disease risks are more general and less localized, reflecting the connectivity and interrelation of how these risks affect entire regions and financial flows.”

“The key thing we can tell from this analysis is, first of all, how can you reduce the risk?” said Andrew Coburn, director of External Advisory Board, Cambridge Centre for Risk Studies, in a video interview. “If we change the vulnerability of the cities, if we made their buildings stronger, for example, and their institutions stronger, that would change the risk by a significant amount,” Coburn said.

Changing the resilience of cities dramatically improves their ability to recover from a disaster, Coburn said, citing things such as how well organized cities are, their governance structure and most critical: access to capital to rebuild. “All those things together can reduce their overall risk by about half,” Coburn said.

Britt Wray Author of "Generation Dread: Finding Purpose in an Age of Climate Crisis"
URL: https://www.brinknews.com/man-made-disasters-pose-nearly-a-third-of-the-risk-to-global-gdp/
Get ahead in a rapidly changing world. Sign up for our daily newsletter. Subscribe
​​