Mindfulness at Work: A Little Bit Goes a Long Way

October 17, 2019 An interview with
Lindsey Cameron
Assistant Professor of Management at the Wharton School 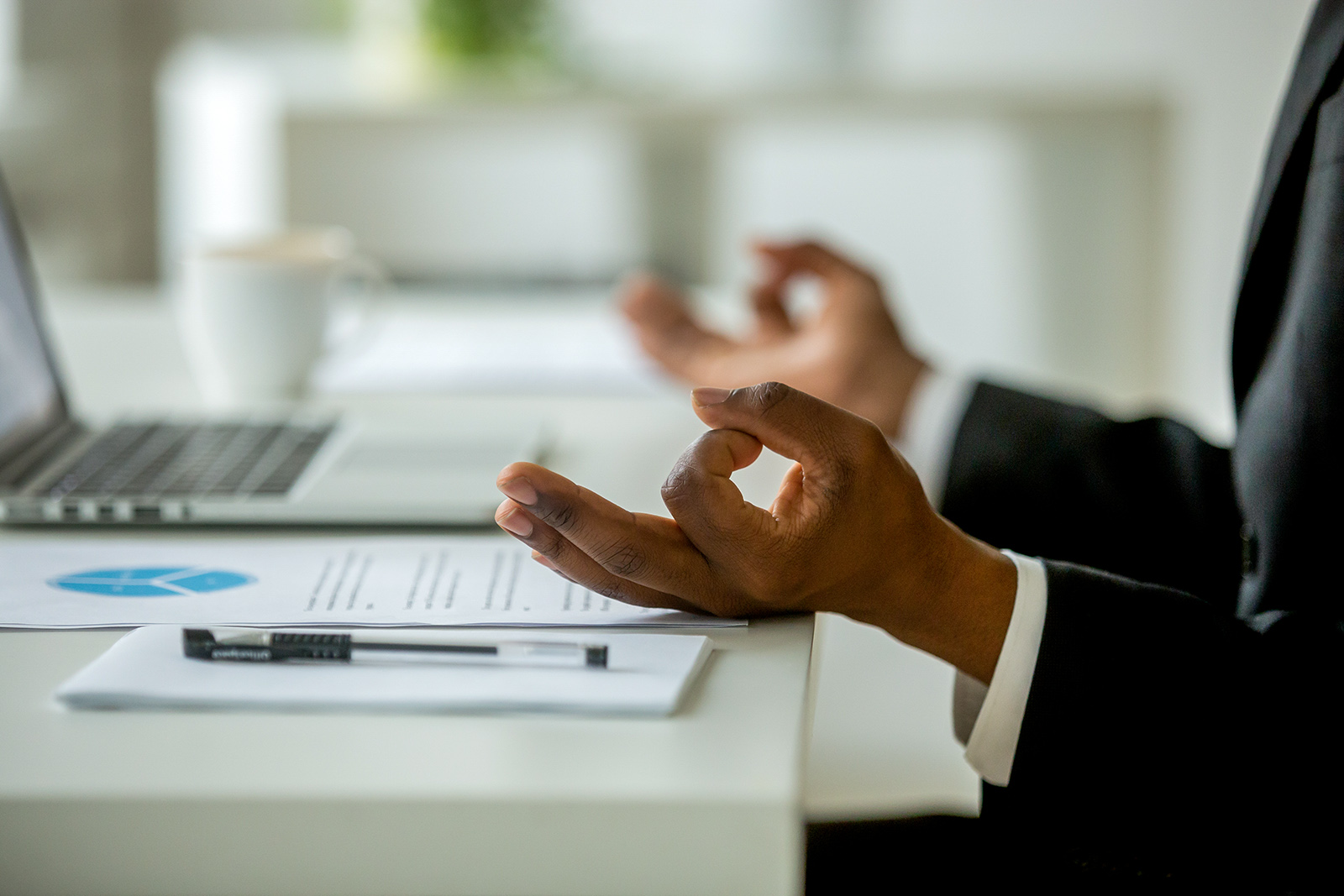 Someone meditates in an office. Mindfulness can act like a buffer to improve relational coordination and functioning when working together on teams.

Do such practices as mindfulness really work at work? New research from Wharton management professor Lindsey Cameron found that including just a few minutes of mindfulness in each day made employees more helpful and productive. Ms. Cameron spoke about the study with Knowledge@Wharton.

Knowledge@Wharton: We’re hearing a lot these days about mindfulness. What is it, and why are businesses so interested in this?

Lindsey Cameron: Mindfulness is really about calming down and being in touch with what is happening in the present moment. Take a moment right now and close your eyes. What are you feeling? What are the sensations against your skin? What is the taste that’s in your mouth? What are your feelings? Maybe you have a growl in your stomach because you’re a little bit hungry. This is mindfulness. It’s basically tuning into what is already here.

It might have been almost 10 or 12 years ago that I was serving in Iraq, and you can imagine there was a lot of commotion around me, particularly when I went to sleep at night. Mindfulness is one of the practices I found that really calmed me and helped keep me centered in the present moment. That’s just from the personal benefits of mindfulness. There are many other sorts of organizational performance benefits at work. If you’re part of the Buddhist tradition, meditation is one of the pathways toward enlightenment. We used secular meditation materials, though, and our participants were probably not Buddhist.

Knowledge@Wharton: In this particular study, you didn’t look at long-term programs, but focused on short-term benefits. Could you describe that for us?

Ms. Cameron: One of the things this study looks at is: Can mindfulness almost be like an injection? Can it be a short-term boost that can give you some of these personal, interpersonal benefits that I was mentioning before?

Ms. Cameron: Our very first company was a rather large insurance company. We worked with a lot of different employees, and many of them were frontline workers. I think it was 11 cities across the United States, and it was a five-day intervention where they meditated somewhere between seven and 10 minutes a day. Then we looked at how they interacted with other people at work, because many of them were in these frontline positions.

The big question we’re looking at is: How does mindfulness [impact] interpersonal relationships? That was Study 1, and other studies went deeper. We had another study at an IT consulting company in India where it was a round-robin design. We had coworkers report on how [their teammates’] helpfulness was during the day after a mindfulness intervention in the morning. Of course, these were all RCTs or random controlled experiments, where there are two groups and individuals in the groups don’t know if they are in the intervention or control group.

People are working in teams, so mindfulness can act like a buffer to improve relational coordination and functioning.

First, from the higher-level picture, we did find that mindfulness made people more helpful at work. They were more generous in the amount of time and the amount of money they would give to their coworkers. Money to coworkers means that there was a donation because somebody was sick at work and you’re contributing to their fund.

Then in terms of mechanisms, we found that perspective-taking — being able to look at someone else’s perspective — was one of the reasons that mindfulness helped people become more effective. Empathy — the ability to feel what other people are feeling — also made people more helpful at work.

Knowledge@Wharton: What are the key takeaways here for businesses?

Ms. Cameron: The key takeaways are that mindfulness works, and that you don’t have to invest in an intensive eight-week intervention to be able to get the benefits from that, because we all know that workplace life is deeply relational.

You’re with coworkers. You’re with supervisors. We spend more time at work than we actually do with our family, and sometimes there can be friction. People are working in teams, so mindfulness can act like a buffer to improve relational coordination and functioning. And we’re showing this with really short doses of mindfulness — seven to eight minutes. Even with a one-time intervention, you’re getting smoother, pleasant, more helpful workers. That’s one of the key benefits.

Knowledge@Wharton: What are the key takeaways here for individuals? If I’m at a workplace that doesn’t offer something like this, can I use a meditation app on my phone or just take a few minutes every day to close my eyes and take some cleansing breaths?

Ms. Cameron: Yes. There are so many apps out there — Insight Timer, Headspace — that you can use to set aside time to do your mindfulness practice. But one thing that we did in one of the studies was to have people chose an activity that they did every day. For the people who were working at a call center, their activity was when they answered the phone, and just taking three deep breaths.

Take three breaths with me right now — you’ve just meditated. Now you can be more mindful and go about your day. It doesn’t actually have to be a formal practice where you’re sitting. It can be just as simple as bringing attention and awareness to a routine activity in your everyday life.

This piece first appeared on Knowledge@Wharton

Lindsey Cameron’s paper, titled Helping Others by Being in the Present Moment: Mindfulness and Prosocial Behavior at Work, was co-authored with Andrew C. Hafenbrack of the University of Washington, Gretchen M. Spreitzer of the University of Michigan, Chen Zhang of Tsinghua University, Laura J. Noval of Imperial College London, and Samah Shaffakat of Liverpool John Moores University.

Assistant Professor of Management at the Wharton School

Lindsey Cameron is the assistant professor of management at the Wharton School.