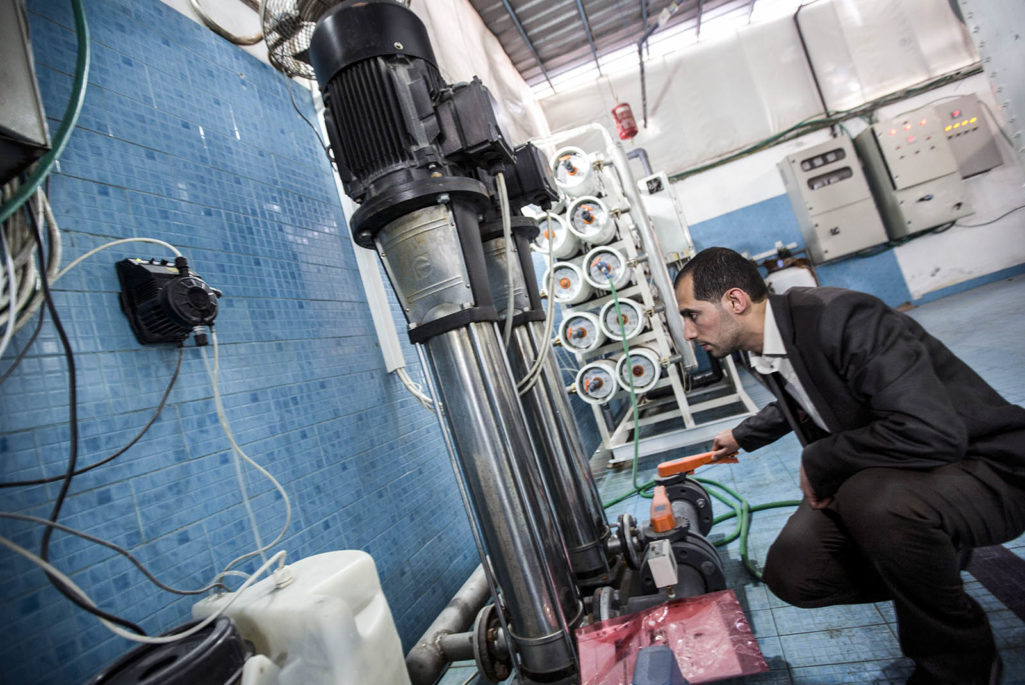 Palestinian engineer, Diaa Abu Assi operates a machine that makes seawater potable on February 28, 2015 in Gaza city. The project uses nanotechnology to reduce the salinity in seawater to a drinkable level, as it it pumps water at high speed through large iron pipes and filters made of nano-material to extract the saline, which is then retreated with minerals that were removed during the desalination process.

Risk is a major barrier to innovation. Taking a risk, however, is almost always the first step in any type of progress. The productivity of the global economy depends on companies that are willing to find new and better ways of doing things despite the potential perils involved.

If companies start to be ruled by fear of liability, our global development could be in jeopardy. By helping businesses manage the risks associated with product development, (re)insurers play an important role in stimulating innovation and helping our world move forward in positive ways.

From the early days of marine exploration to the first satellite launch to the development of state-of-the-art technologies, (re)insurers have provided a critical safety net that has supported and encouraged the creative process. Given the continued transformative potential of emerging technologies such as nanotechnology, 3-D printing, aerial drones and self-driving automobiles, it is vital that insurers and reinsurers continue to help accelerate the commercialization and benefits of these innovations. At the same time, it is critical to thoroughly understand and manage the risks.

Some of the inherent challenges surrounding these innovative technologies include:

Nanotechnology: The Plastics of the 21st Century

Just as plastics were a pervasive and revolutionary product of the 20th century, nanotechnology products are changing our lives in myriad ways. This technology has evolved into a global force, transforming manufacturing, medicine and several consumer/food goods. The field is worth an estimated $1 trillion globally and is projected to grow at a rate of 16.5 percent through 2020.

Nanotechnology is a generic term for applications that work with matter that is so small that it exists in the atomic and molecular realm. By harnessing these new properties, researchers have used nanotechnology to strengthen the material used in golf clubs and bicycle frames, to create stain- and water-repellant clothing and to produce wear-resistant paints and coatings, including major industries and hundreds of consumer products ranging from ranging from automotive, chemical, electronics, medicine and textiles.

But nanotechnology carries both risk and reward. While it appears almost certain that the rewards will greatly outweigh the risks, attention must be paid to possible dangers to the well-being and the potential of human latent bodily injury. The Project on Emerging Nanotechnologies grouped products according to their potential exposure pathways into the human body from a theoretical perspective, and according to each product’s intended use. Based on the study, the number of consumer/industrial products that had the potential for resulting in bodily injury and occupational disease via transdermal, ingestion and inhalation exposure are 496, 129 and 212, respectively.

As it stands today, most global (re)insurers do not differentiate or exclude risks from nano-products. As a result, many in the industry acknowledge that insurance policies and reinsurance agreements in place may already be covering these risks. Since losses from nanotechnologies have not materialized, carriers will need to contemplate and integrate an exposure-based modeling approach. Otherwise they could be accumulating multiple years of losses and reserves emanating from the next asbestos-like scenario on their books without realizing it.

Regulators around the world have initially struggled to embrace and regulate this drone technology.

Growth projections for the drone or Unmanned Aerial Systems (UAS) sector are phenomenal, as the opportunities and advantages afforded by using this type of machinery in construction, agriculture, energy and utilities, mining, real estate, news media, film production and public safety become more apparent each passing day. Nevertheless, the potential economic benefits are considered to be vast, expecting to generate an estimated economic benefit of $82 billion along with 100,000 jobs by 2025.

This rapid increase in the number of drones is prompting concerns for:

Regulators around the world have initially struggled to embrace and regulate this drone technology. In regions without adequate oversight, there would be an increased risk for collisions and accidents, thereby resulting in greater loss frequency and severity for (re)insurers. However, some progress is finally being made, as regulators weigh the potential benefits of using drones against issues surrounding public safety, privacy and national security. This should mitigate some of the worst-case scenarios in play right now. Effective December 21, 2015, individuals who use small drones for recreational use will be required to register them with the U.S. Federal Aviation Administration (FAA). Existing owners will have to register by February 19, 2016 and new buyers will have to register before their first flight.

Meanwhile, the insurance industry has been responding to demand at its own forward-looking pace. (Re)insurers are using their experience of the manned aircraft to assess the risk and/or limit their exposure by selection against size, uses and values, or the type of coverage offered. In March 2015, a Bloomberg article titled Insurers Step Up for Drone Pilots Unwilling to Wait on FAA Rules noted that U.S.-based companies interested in drone operations are obtaining coverage from insurers that are writing their own safety rules for insureds.

Despite the FAA announcing that it intends to issue final regulations for small commercial drones by mid-2016, until which time none are supposed to fly without a formal waiver, the article stated that several U.S. insurers are already writing policies for drones across the country.

The FAA has been highly accommodative to commercial unmanned aircraft operations in U.S. airspace through the granting of more than 1,000 waivers for operation.

This exemption provides authorization for certain unmanned aircraft to perform commercial operations. The FAA has also increased the issuance of “blanket” Certificates of Waiver Authorizations for new and novel approaches for inspecting power grids, railroad infrastructure and bridges.

Drones have the potential to become one of the biggest risks for insurers, but also one of the most significant product development areas due to the rapidly expanding usage by companies as well as the public. Although the insurance industry has begun covering these risks, many manufacturers (some of which are emanating out of less regulated markets such as China) may not be adequately covered. We see emerging risks associated with UAS and drones will involve highly complex liability scenarios that could encompass all aspects of the global UAS/drone manufacturing and service provider supply chain.

Self-driving cars are expected to begin commercial production and be in use by 2017. Google, the pioneer in the field, claims it can cut road accidents by eliminating the human driver. Although safety and efficiency gains have been the most cited and prominent benefits of self-driving automobiles, a considerable number of challenges remain.

Different types of technology will be operated in parallel to existing transportation options during their gradual implementation phases. Some key questions that arise are:

It is also possible that some industries or parts of the population will reject this new technology, for economic or privacy reasons or simply a preference. Assuming regulators facilitate wide use of self-driving vehicles and the public accepts them, the speed of their implementation will depend on costs (including insurance) and production capacity, as well as the pace of transitioning away from current transportation systems. The shift to fully self-driving cars is expected to be gradual, impacting some transport segments quicker than others.

As with any opportunities brought about by advances in technology, they go hand-in-hand with a set of new and little understood risks, to which operators, regulators and the (re)insurance industry are all currently trying to comprehend, embrace and adapt.

Currently there are insufficient precedents set in terms of data, claims and overall knowledge in order to enable underwriters to accurately assess the numerous risks involved in autonomous vehicle operations. However, over the next few years, this data will eventually be generated (beyond these machines and their performance reliability) the hard way—via the emergence of complex litigation and insured and uninsured losses.

Because of the complexity and uncertainty involved regarding new technology risks, the degree to which carriers have advanced their risk management practices in this regard notably varies. Until recently, they tended to manage technology liability risks independently and assume the integrated risks either knowingly—or sometimes unknowingly. It is essential that these catastrophe risks be identified, prioritized, accumulated and modeled in their entireties in order for their enterprise level implications to be properly understood and hedged.

Emil Metropoulos is Senior Vice President – Guy Carpenter & Co. LLC. and a member of their Casualty and Terrorism Specialty Practices. In this role, he provides strategic advisory on exposure, experience and catastrophe modeling as well as in their implementation of optimal (re)insurance applications and solutions.