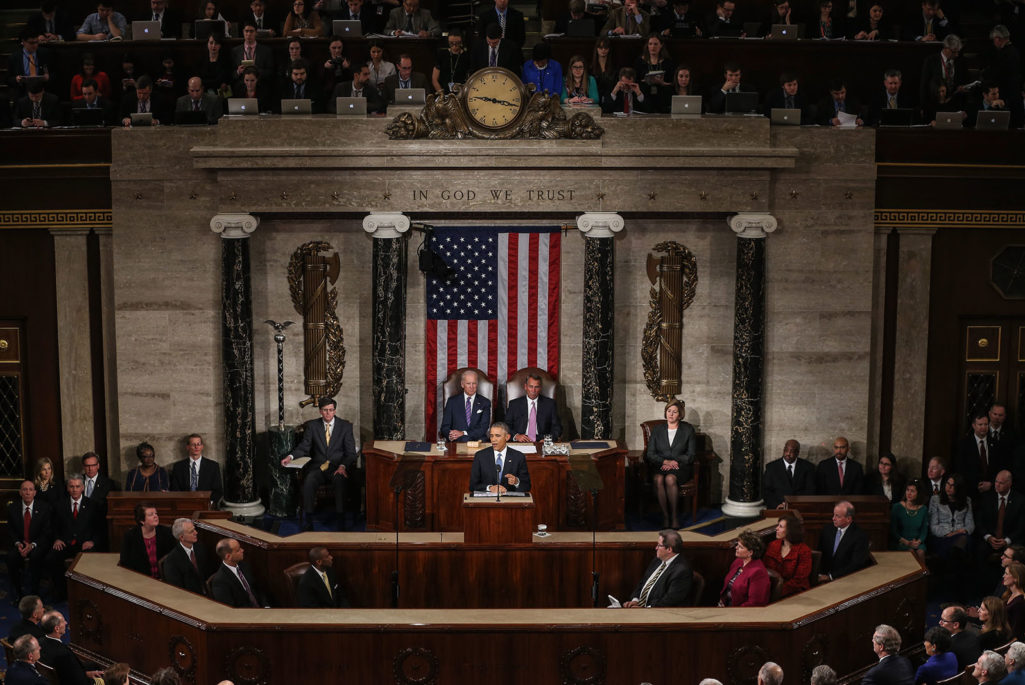 U.S. President Barack Obama delivers his State of the Union speech before members of Congress in the House chamber of the U.S. Capitol January 20, 2015 in Washington, DC.

President Obama’s State of the Union address leaned heavily on the theme of resilience, noting that although there are still hard times for many “tonight we turn the page.” His ambitious vision for the country was drawn from the blueprint of an unabashed liberal agenda, seeking to bolster the middle-class and rein in economic inequity, while outlining an array of goals and initiatives covering everything from cybersecurity and terrorism to trade and taxes.

However, one theme remained constant across the board: Risk. While working against the backdrop of a contentious Republican-controlled Congress will be a continued struggle for the president, experts also identified several underlying areas of risk facing his proposals.

Understating the Powers of Terrorism

While Obama makes clear his plans to fight the Islamic State of Iraq and the Levant (ISIL), experts expressed concern over his terrorism-related commentary, specifically in what it lacked. It was partly a historic move: For the first time since 2002, al-Qaida wasn’t mentioned in the State of the Union. But many see this omission as a gaffe, instead of a victory.

“The threat from al-Qaida persists, especially since senior leadership is now promoting the concept of lone jihad’,” said Katherine Zimmerman, a lead analyst on al-Qaida for American Enterprise Institute’s Critical Threats project. “The sectarian conflicts in Iraq and Syria are driving radicalization throughout the Middle East and al-Qaida will seek to take advantage of these conditions.”

Additionally, Obama’s illustration of ISIL’s threat came across as too understated to Republicans in particular.

“The president’s pronouncement of a ‘smarter kind of American leadership’ must be puzzling to any American who has watched the news in the past six years,” Sens. John McCain (R-Ariz.) and Lindsey Graham (R-S.C.) said in a joint statement. “Despite the president’s claim of progress in the campaign against ISIS, this terrorist army continues to gain thousands of recruits and now controls significantly more territory in Syria than when U.S. airstrikes began there six months ago.”

Obama asked Congress to give him Trade Promotion Authority (TPA) in hopes to “level the playing field” with trade partners like China. With such authority, the president could promise finalized trade agreements to global partners without the possibility of Congress overturning them at the last minute.

“Look, I’m the first one to admit that past trade deals haven’t always lived up to the hype, and that’s why we’ve gone after countries that break the rules at our expense,” Obama said. “But ninety-five percent of the world’s customers live outside our borders, and we can’t close ourselves off from those opportunities.”

But what’s at stake if Congress denies this ask? Ed Gresser, executive director of trade policy think tank Progressive Economy, said the U.S. could risk losing an important role in designing the future environment of trade, especially in the Pacific.

“This would play out with respect to quite a lot of issues, including…the chance to raise American exports and create a long-term spur to growth, the hope to broaden respect for labor rights in export industries, control trade in wildlife, and reduce pressures on fisheries,” Gresser said.

Gresser said if Obama is granted TPA the U.S. would be much better positioned to champion its trade goals in these areas.

For some, the biggest risk lay in what wasn’t mentioned in Tuesday’s speech. Obama swept over a long list of topics in regard to foreign policy, which led to audience frustration.

“The president’s State of the Union speech touched on many foreign policy topics and was too cosmic and vague to allow one to draw concrete conclusions from,” said Steve Hanke, professor of applied economics at Johns Hopkins University. “What is needed going forward are clear specifications as to what a policy has to accomplish.  In science, these are called ‘boundary conditions’. The president avoided this type of rigor and embraced populist rhetoric instead.”

The majority of the president’s speech did steer towards national growth—rather than international relations—more than it has in the past. Brookings Institute’s Katherine Moon noted in an opinion piece that this was a speech that “assumed and emphasized that the United States is the preeminent global leader and will continue to be” without any new insight on foreign relations.

“Rather than focus on military muscle-flexing as the substance of global power, [Obama] focused on nurturing U.S. power from the inside out,” Moon said.

“Instead of proposing unnecessary privacy-invasive bills, we should be collectively tackling the low-hanging fruit.”

With his State of the Union so closely following the recent major cyber attacks, many were prepared for Obama to spend significant time discussing new cybersecurity strategies. Although he did call for Congress to pass cybersecurity reforms and install heightened penalties for cyber criminals, cybersecurity experts said that the president focused too much on the aftermath of cyber crime—and too little on the act itself.

“The president’s proposed cybersecurity legislation is noble in its attempts; however it is primarily focused on helping people and companies after an attack has already occurred,” Chad Fulgham, former CIO of the FBI, told Forbes. “Retroactive, defense-minded strategies do not address the questions plaguing companies today: ‘When will I be hacked?’ and, ‘Can I do something about it?’”

Others believe the president’s proposed cyber legislation isn’t needed and wouldn’t have done anything to stop the major cybersecurity events of last year. Instead, there are inherent risks lurking in the proposal.

“Instead of proposing unnecessary privacy-invasive bills, we should be collectively tackling the low-hanging fruit,” says the Electronic Frontier Foundation, a San Francisco-based cyber rights group. “This includes encouraging companies to use the current information sharing regimes immediately after discovering a threat.

The president’s suggested involvement in net neutrality and municipal broadband services sparked debate in supporters of Internet freedom. While an economy free of major broadband monopolies and competition is appealing to many, the idea of a taxpayer-funded broadband service regulated by the government seems too authoritarian to others.

“Internet policy needs to be freed from political calculus, not dictated by it,” said Richard Bennet, network engineer expert and fellow at American Enterprise Institute. “The Internet has yet to reach its full potential, so we should not allow heavy-handed regulation to ensure it never does.”

However, other experts see a bigger risk in not developing municipal broadband and leaving broadband regulation in the hands of major corporate providers. Many longstanding supporters of community broadband applaud the president’s move to combat potential threats to Internet access and the economy.

“What the president brings to this issue is serious weight and a ton of public relations,” Craig Settles, broadband consultant, told The Daily Yonder blog. “There’s no way broadband advocates could have generated this level of interest and news coverage of the issue without the president’s involvement.”