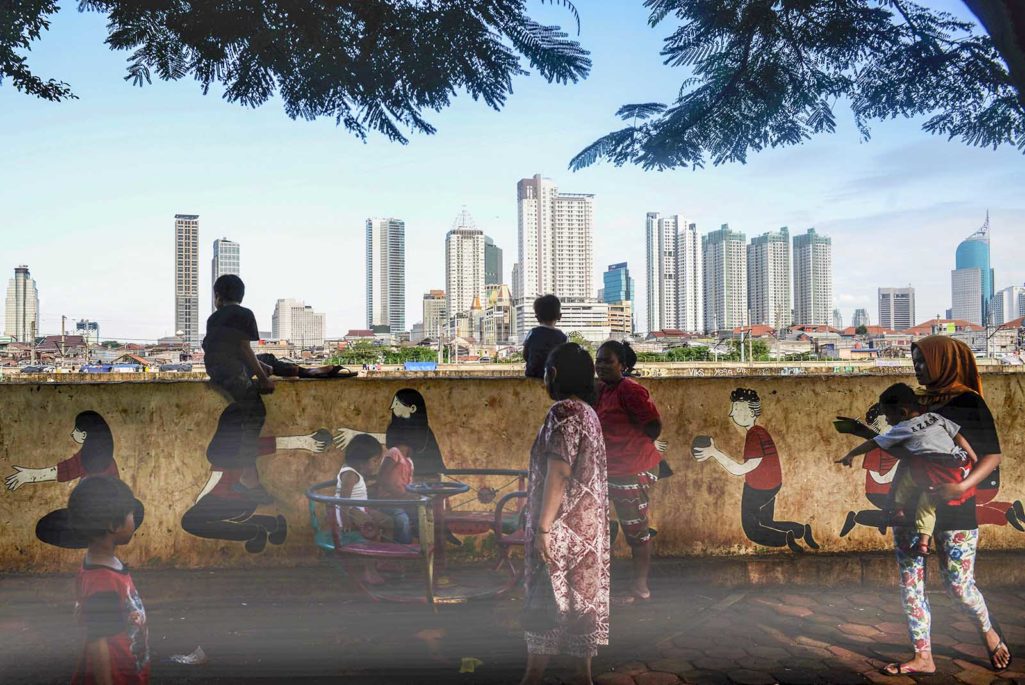 Indonesian children play by a riverbank opposite the city center in Jakarta. Indonesia's economy has been losing steam for some time on the back of falling demand for its key commodity exports. The Indonesian regime has made boosting the country's flagging economy a priority as it launched a drive to attract much-needed foreign investment and ramped up infrastructure projects.

Following several years of uncertainty, there is improved confidence in global economic growth. Obstacles that hindered growth in emerging markets and developing economies before seem to be waning, and exports are increasing.

World Bank forecasts are frequently updated based on new information and changing (global) circumstances. Consequently, projections presented here may differ from those contained in other Bank documents, even if basic assessments of countries’ prospects do not significantly differ at any given moment in time.
a. GDP at market prices and expenditure components are measured in constant 2010 U.S. dollars. Excludes American Samoa and the Democratic People’s Republic of Korea.
b. Non-oil GDP. Timor-Leste’s total GDP, including the oil economy, is roughly four times the non-oil economy, and highly volatile, sensitive to changes in global oil prices and local production levels.

Recent Developments in the Region

In the first half of 2017, Malaysia’s commodity-exporting economy recorded sustained growth owing to stable commodity prices that have boosted business sentiment and investments. In addition, its export growth was complemented by a global revival in manufacturing and trade as well as a modest recovery of oil and gas shipments. Malaysia’s income support measures, higher infrastructure spending and improved exports are expected to bolster growth.

In Indonesia, a favorable investment climate has supported private investment recovery. There are also no plans to extend expenditure cuts into 2017, and its policies are likely to be more accommodating in the medium term. Indonesia is projected to grow at 5.2 percent in 2017, 5.3 percent in 2018 and 5.4 percent in 2019. Policies that will likely contribute to its growth include streamlining business regulations, liberalizing foreign direct investment (FDI) and maintaining a stable rupiah. Exports from Indonesia also saw a strong rebound amid continued demand from China.

In the case of the Philippines, an expansionary fiscal policy has encouraged capital formation while robust remittances, credit growth and low inflation have aided private consumption. The Philippines has witnessed high credit growth, rapid inflation, widening fiscal deficits and falling current account surpluses. Regardless, its policies continue to remain accommodative. Both public and private investment has increased considerably, and as a result, projected growth is expected at slightly below 7 percent in 2017-19.

Vietnam is expected to grow at just under 6.5 percent owing to strong exports in 2017-19. Sovereign bond spreads narrowed and the country’s growth is expected to remain steady in the 2017-19 period. However, rising trade protectionist sentiments could affect Vietnam’s opportunities.

Producer prices in China recovered in the first half of 2017, highlighting stable commodity prices and a recovery in economic activity. A strong fourth quarter in 2016 ensured GDP expansion to 6.9 percent in the first quarter of 2017, and that was aided by strong consumption and a recovery of exports. Consumer price inflation remained below target, while producer price inflation has been moderate. Strong external demand, meanwhile, ensured robust exports in the first half of 2017. China raised its short-term interest rates in the first quarter of 2017 and continued to tighten macro-prudential regulations to address financial stability risks. Overall, growth in China continues to slow gradually.

The key risks to growth in the region are mainly external. They include rising protectionist sentiment in Western economies such as the U.S., which are leading to “uncertainty about the future of established trading relationships,” continued economic uncertainty in Europe (mainly relating to Brexit), and the risk of tightening financial conditions.