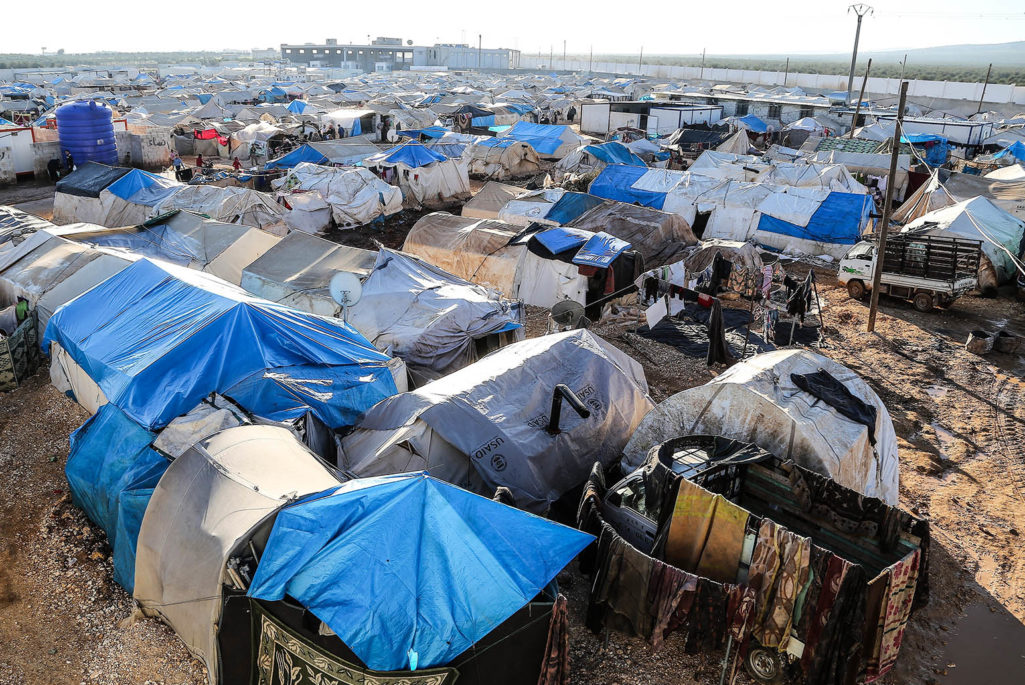 Syrians, fled from the clashes in their country, live under harsh living conditions during winter in a Syrian refugee camp near Turkish border, in Aleppo, Syria, December 2014.

From crises in foreign policy to dramatic shifts in the global economy, 2014 has given industries of all sizes a lot to consider as the New Year unfolds and risk mitigation plans are reviewed and recalculated.

What follows are the top five risk events across BRINK’s core subject areas—economics, geopolitics, environment, technology and society—that we’ve witnessed over the past year.

Economics: The dramatic drop in oil prices took economists by surprise: In only six months, the price of oil has halved to less than $60 a barrel. According to the International Energy Agency, oil supply—due, in part, to stronger fracking efforts in the Western hemisphere and shrinking oil demands in Europe—was set to significantly outpace demand for oil in 2014. The result? Cheap oil for global industry, but a worrisome development for oil-producing countries.

The effects on the economy have been mixed. In Russia, where the health of the economy is largely contingent on oil prices, the ruble plummeted to historic lows. In Venezuela, one of the world’s leading oil producers, leaders lobbied OPEC to cut down oil production in order to boost up prices—but to no avail. OPEC decided late in November to let prices keep falling in an effort to let the market correct itself over time.

Geopolitics: Abroad, this year’s risks were just as unexpected. When President Obama took office for his second term in 2012, his administration expected a foreign policy agenda focused largely on improving U.S.-Asia relations and carefully disengaging from Afghanistan. But that was before the growing treats of ISIS became global realities.

The quick rise of the Sunni extremist group became significantly more noticeable after its leaders broke away from its better-known counterpart, al-Qaeda, in February. Since then, its goal has remained to establish an all-encompassing Sunni state in the Middle East—at any cost. As a well-financed and well-armed ISIS continues to gain more territory in Iraq and Syria, President Obama has ordered broad and increased air strikes in an effort to curb the group’s influence and growth.

What does this mean for business? In October, FOX News reported that the State Department was warning U.S. businesses in North Africa of ISIS dangers. The message to American business executives in the region warned: “As the U.S. Government extends its anti-ISIL [ISIS] efforts, there is a heightened risk that U.S. private sector and civilian interests may be targeted.”

Environment: This year has seen few natural disasters. In fact, the number of hurricane-related fatalities totaled 19 this year compared to an average of more than 270 deaths every year from 2010-2013. The World Meteorological Organization said that record-setting hot years are generally a result of manmade changes and unusual weather phenomena like El Niño. But El Niño, the cyclical warming of Pacific Ocean temperatures, didn’t even come this year and it was still the hottest year on record—and that can mean trouble for a number of different industries.

Businesses and industries based on shorelines will have a tough time. In South Florida, home to some of the largest metropolitan areas in the southeast U.S., businesses are particularly vulnerable to climate change and rising seawater. The National Climate Assessment recently noted that in South Florida “just inches of sea level rise will impair the capacity of stormwater drainage systems to empty into the ocean.” The region’s extensive real estate market has also responded in turn.

In October, Bloomberg Businessweek reported that the area’s real estate developers were actually building more condominiums, in a seemingly paradoxical effort to curb the effects of rising seawater. “South Florida relies almost exclusively on real estate taxes to fund public infrastructure,” according to the article. “If the threat (or reality) of sea level rise suppresses property valuations, there will be less public money to address the risk.”

Technology: Some of this year’s most vulnerable targets for risk have been our country’s extensive network of computer systems. Notable cyber attacks have rocked private enterprise and experts have acknowledged the need for better preparation. In May, hackers tapped into eBay’s network and exposed the personal information of about 233 million users. And in September, nearly 56 million Home Depot shoppers had their credit card information tapped into by cyber attackers in a large-scale hack. The attacks proved companies were vulnerable to actions aimed at doing reputational harm, too.

Last month, former National Security Agency head Keith Alexander said the U.S. was ill prepared for a large cyber attack. “This is a whole new ballgame,” Alexander said, according to The Hill. “One that, quite frankly, as a country, I don’t think we’re prepared for.”

Society: One major risk for global societies has been involuntary migration as a result of political or economic strife. The conflict in Syria, for instance, has led to nearly one-third of the country’s population fleeing the country—that’s up to 6.5 million people.

Where are migrants headed? In Italy, 10 times more people landed on the country’s shores than they did in 2013. This figure is largely made up of North African migrants who try to illegally sail into southern European ports to escape political and economic stressors in their home countries. But this year was the real record breaker for arrivals. According to the Guardian, 160,000 new arrivals landed on European shores during the first nine months of the year, double the previous 2011 record. But not everybody makes it: 2,500 people have died or gone missing trying to cross the Mediterranean just this year.

As long as political unrest continues to rock nations in North Africa and the Middle East, forced migrations to Europe will likely continue.