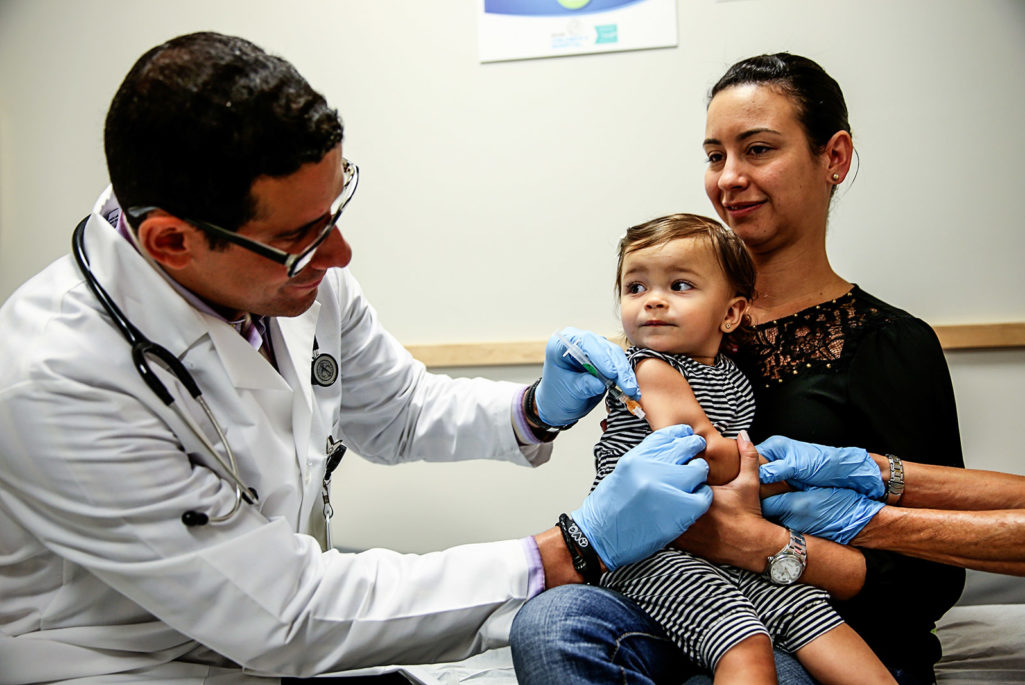 Daniela Chavarriaga holds her daughter, Emma Chavarriaga, as pediatrician Jose Rosa-Olivares administers a measles vaccination during a visit to the Miami Children's Hospital. The Centers for Disease Control and Prevention has announced that the U.S. is seeing the most measles cases in 20 years as they warned clinicians, parents and others to watch for and get vaccinated against the potentially deadly virus.

Six-year-old Rhett Krawitt has been fighting leukemia for more than four years. But his parents only recently realized this isn’t the only life-threatening risk he’s up against. Because Krawitt’s already compromised immune system prevents him from being vaccinated, the surrounding community’s low vaccination rate puts him at a high risk of catching a life-threatening communicable disease.

Krawitt’s California community isn’t sufficiently immunizing his classmates, according to findings from the Centers for Disease Control and Prevention. With seven percent of his kindergarten class unvaccinated, Krawitt is unable to rely on herd immunity—the idea that the number of vaccinated people in a group reduces the risk to unvaccinated members.

If the trend of U.S. parents choosing not to vaccinate their children continues its notably sharp incline—nearly tripling in some states over the past decade—what’s at stake? Medical experts and government officials are saying that without a significant change in vaccination rates, the country could be at risk of once-eradicated diseases making a permanent return.

“If you choose not to immunize your own child and your own child dies because they get measles, OK, that’s your choice,” Rhett’s father, Carl Krawitt, told KQED News. “But if your child gets sick and gets my child sick and my child dies, then… your action has harmed my child.”

This isn’t an isolated issue. Since the California measles outbreak traced to an unvaccinated child in Disneyland made headlines in January, reports have come out mapping pockets across the country where communities of children lack herd immunity based on the similar anti-vaccine beliefs of their parents.

“It’s only January and we have already had a very large number of measles cases. As many cases as we typically have all year in typical years,” said Anne Schuchat, Director of the CDC’s National Center for Immunization and Respiratory Diseases, in a press briefing. “This worries me and I want to do everything possible to prevent measles from getting a foothold in the United States and becoming endemic again.”

John Swartzberg, clinical professor emeritus at the University of California, Berkeley, stressed that even though measles was declared “non-endemic” in the U.S. in 2000, these significant vaccination imbalances within communities could invite a return, erasing the years of medical progress that led to this achievement.

This uptick in clusters of unvaccinated communities is largely based on information sharing in like-minded populations. A recent study found that communities where parents refuse to vaccinate their children shared similar makeup: They were liberal, insured, and middle-to-upper class.

Daniel Salmon, deputy director of the Institute of Vaccine Safety at Johns Hopkins University, likened vaccine refusal to politics in a recent interview with NJ Advance Media. “It’s all local,” he said.

A common argument brought up by anti-vaccine groups is that vaccinated children shouldn’t be concerned about catching a disease from an unvaccinated child, because they’ve already been immunized. But the CDC reports that most routine childhood vaccines are effective for 85 to 95 percent of recipients. It’s an unavoidable fact that some individuals won’t develop immunity—even if they’re vaccinated. That’s where herd immunity comes into play.

The U.S. government as well as medical experts across the country say 90 to 95 percent of the population should be vaccinated against a disease to maintain the buffer zone needed for herd immunity. Currently, the country is at 94 percent vaccination rate within kindergarten classes. But that doesn’t take into account these condensed, localized clusters of anti-vaccine groups. Some schools are reporting as low as 50 percent vaccination rates among their kindergarten classes.

The CDC’s Schuchat said that with measles in particular, if one person has it, 90 percent of the people near that person who aren’t immune would also be infected.

“You can catch it just by being in the same room as a person with measles even if that person left the room because the virus can hang around for a couple of hours,” Schuchat said.

People who don’t respond to the vaccines and those with weakened immune systems like Krawitt aren’t the only people who rely on herd immunity. Regardless of their parent’s views on vaccination, most children must wait until their first birthday to receive vaccinations against communicable diseases. The elderly and those suffering from autoimmune diseases, like AIDS, are also at risk.

Despite the urging of advocates, the numbers of unvaccinated children have continued to rise—and they’re leaving a mark. Last year, the CDC saw 343 cases of measles stem from one outbreak across vaccine-wary Amish communities in Ohio. In Wisconsin, experts are pointing to unvaccinated children as the potential spark to a significant spike in whooping cough cases. And now the CDC is reporting 102 cases of measles connected to the Disneyland incident have spread across the country like wildfire.

So, is it possible to stamp out these lighting-bolt outbreaks before they become endemic? For now, strict government enforcement remains a far-off strategy. And instead of a medical solution, many are turning to psychologists to curb this trend. A recent study co-conducted by Dartmouth College political science professor Brendan Nyhan found that a variety of messages by public health agencies debunking anti-vaccine reasoning and stressing the scientific importance of vaccinations were ineffective in changing the views of parents already against vaccinating their children.

A more proven approach, he added, is to help heath care providers communicate with patients more effectively. Nyhan cited a 2013 study that found patients more receptive to medical recommendations they were against after the doctor legitimized their original opposing view.

Janet Stemwedel, a professor of philosophy at San Jose State University, echoed this idea, and said that if an ideological shift doesn’t take place, it may take a few more widespread outbreaks of preventable diseases to finally hit the message home.

“It is hard work doing what you think you need to do for your kids—protecting them from all the things you think they need protection from can be overwhelming,” she said. “But helping them share a world is important, too. Finding ways to gently draw people’s attention to that may be our best hope at not giving diseases like measles the upper hand again.”