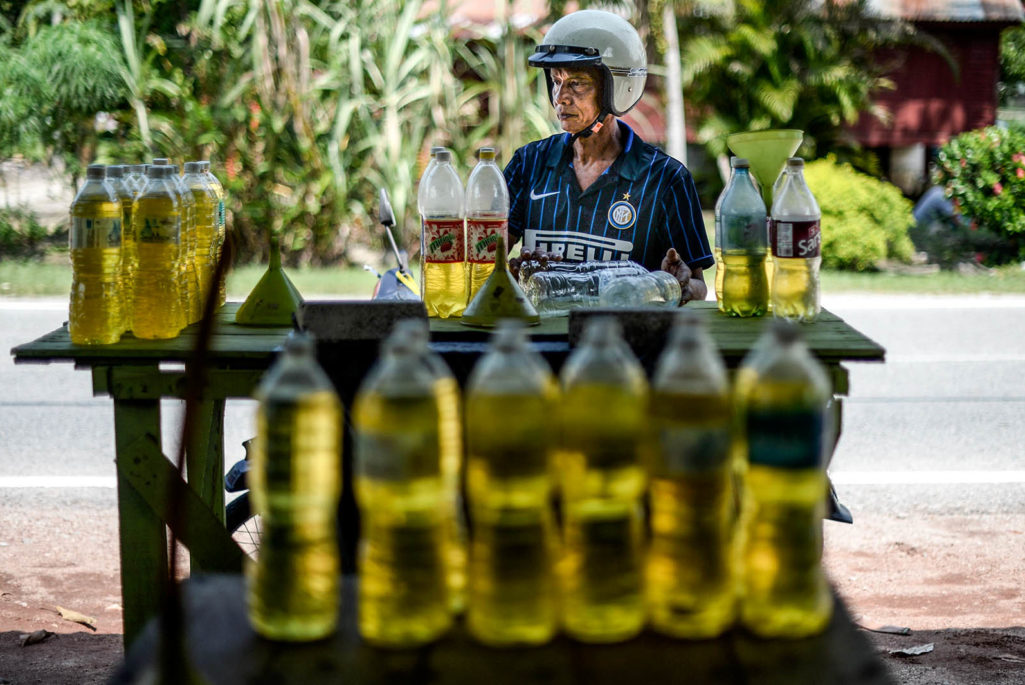 A villager looks at bottles of petrol oil at a village in Hulu Langat, outside Kuala Lumpur on April 18, 2016. Oil prices plunged on April 18 after the world's top producers failed to reach an agreement on capping output.

Perception is relative. Entering 2017, oil prices are hovering around $50 per barrel, down from their peak—above $100—in 2014. However, compared to 12 months ago, the current price is 50 percent higher. Choosing to see the glass as half empty or half full depends significantly on whether one stands to gain or lose from lower prices.

Asia’s top 10 oil importing countries accounted for 44 percent of global imports in 2015; as a region, it is the world’s largest importer of oil. Therefore, it’s easy to see why the World Economic Forum’s annual Executive Opinion Survey finds “energy price shock” to be a key concern for business executives in the region.

A sustained period of lower oil prices would seem beneficial for the region. However, to understand the economic impact of this in a meaningful way requires deeper consideration.

The industry is positioned within a much broader economic ecosystem impacted by price shifts. Stakeholders in this ecosystem include governments, energy intensive industries, the financial sector and end users, among others, and is a subject worth exploring in more depth. Winners and Losers Across Asia

The two net oil exporters in Asia—Brunei and Malaysia—have been hit hard by the price collapse, given their reliance on oil income to balance their budgets. But slumping oil commodity prices also afforded opportunity, providing Indonesia and Malaysia the option to remove expensive fuel subsidy schemes. Indonesia’s fossil fuel subsidies accounted for more than 4 percent of GDP in recent years, which weighed down the national budget for years.

Net importers have been clear beneficiaries, with India realizing cost savings that have helped narrow its current account deficit and reduce inflation from 10.9 percent in 2013 to 5.9 percent in 2015. Healthy macroeconomic fundamentals have also allowed the Indian government to manage its fiscal deficit better by cutting subsidies on petroleum products while raising energy taxes.

The oil and gas industry and its direct suppliers have been the most adversely affected. Record losses have led to significant restructuring and divestments, with many companies struggling to stay afloat. South Korea’s three largest ship builders are all expected to continue with job cuts and asset sales in 2017, with at least one of the three requiring employees to take rotations of unpaid leave.

Meanwhile, energy intensive industries, such as transportation and farming, have benefited significantly. Globally, operating profit margins for airlines are estimated to be 8.8 percent in 2016, up from 3.5 percent in 2013. Singapore Airlines recorded full-year operating profits of S$485 million (US$342 million) in financial year 2015/16, up S$145 million from the previous year, due largely to lower net fuel costs.

Planning for an Uncertain Future

Two major drivers of the oil price fall surprised many in the industry. The reduction in Chinese oil demand growth came sooner than many expected, and few predicted the ability of U.S. shale production to reach the highs that it has. It is hard enough to predict the future trajectory of oil prices in times of apparent global stability; doing so in times of significant global uncertainty is harder still.

This leaves the stakeholders in the oil price economic ecosystem with decisions to make about how to build resilience. For the oil and gas industry, the last few years have been about cutting costs. The president of Halliburton, the oil industry service provider, described new contract negotiations with oil producers as a “barroom brawl.” The exploration and production (E&P) firms may have won in recent negotiations; however, getting tough on suppliers can backfire when oil prices rise again and service providers hold the power. That’s why producers, as successfully shown by many U.S. shale companies, need to focus on true efficiency gains that will have a lasting impact beyond the current downturn.

Following the recent agreement between members of the Organization of the Petroleum Exporting Countries (OPEC) and other producers to cut production in 2017, prices have edged higher, and there is renewed confidence among some in the industry that significant investment will be signed off this year for new projects. However, this confidence does not seem to extend to Asian E&P firms as the mature oil fields in the region require expensive technology investment just to maintain existing production levels. China alone is expected to see production fall by 7 percent for the second year running.

This fall stands in stark contrast to the region’s growing energy demand and ensures that governments in Asia have hard decisions to make about how to manage their individual energy trilemmas, ensuring the balance between energy security, environmental sustainability and energy equity. The most recent Energy Trilemma Index suggests that Asia can improve across all three dimensions by increasing the use of renewable energy sources, and decreasing its import dependence by fostering reliable trade relationships and improving infrastructure.

Investment from Asian countries in renewables has been mixed. Some believe that a fall in oil prices may reduce the competitiveness of renewable investments. Others calculate this effect would be offset by ongoing technological advancements that have ensured renewables remain at least as competitive as they were a few years ago. Broad ratification of the Paris Agreement by major Asian economies should contribute to ensuring that investment in renewables remains a policy priority, as it already is in China, where a $100 billion renewables investment in 2015 accounted for a third of global expenditure.

Amidst the uncertain global economic outlook, Asia is generally seen as a bright spot for growth. The trouble with dealing in unknowns, however, is that a period of volatility for the region is just as possible. Given the political, economic and environmental events over the last year, ongoing volatility would surprise few. As a result, the concept of building resilience has never been more applicable to stakeholders across the oil price economic ecosystem, both to protect against further downturns and to enable organizations to take advantage of any unforeseen opportunities that may arise.

Blair Chalmers is a director in Marsh McLennan Advantage and leads the unit’s agenda for the infrastructure and construction sectors. Prior to this role, he worked for Oliver Wyman, the management consultancy, with a focus on clients in asset intensive industries.