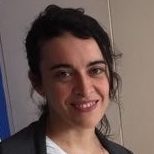 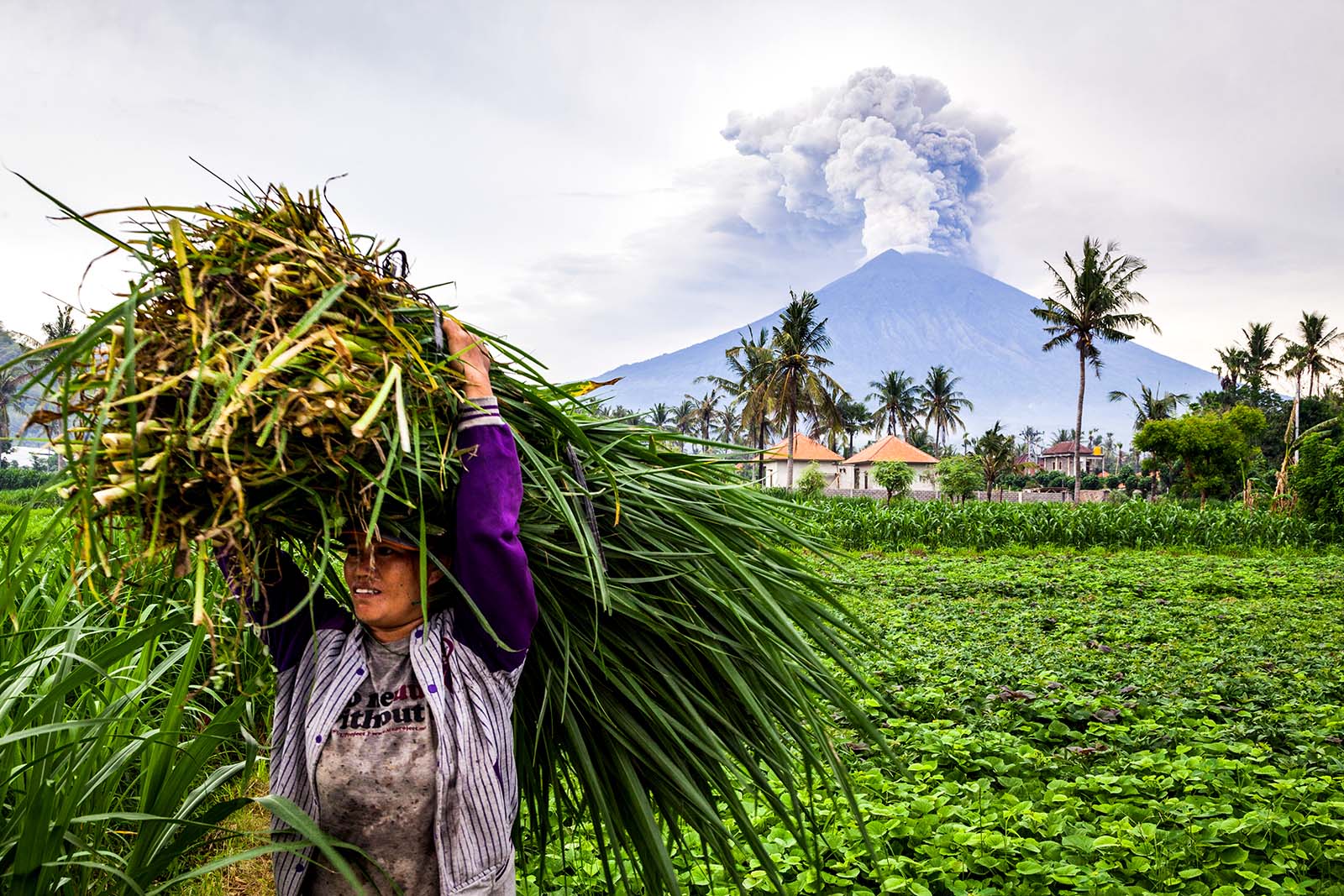 A farmer is seen carrying grass while Mount Agung spews heavy volcanic ash in Bali, Indonesia. The risks posed by volcanic eruptions are complex and not well understood.

Volcanic eruptions are complex phenomena that may affect populations and economies in ways we may not be familiar with. Large volcanic eruptions can spew ash spreading hundreds or even thousands of kilometers; and deposited ash may damage buildings at different levels, from catastrophic structural damage in extreme cases of significant ash fall accumulation, to abrasion or corrosion of nonstructural elements such as roofs, gutters and cladding.

This is something various parts of Asia have been confronted with, time and again, with significant loss of life and huge economic losses accruing in various ways. The June 12, 1991, Pinatubo eruption in the Philippines, for example, caused a death toll of 847, a large proportion of which was associated with roof collapses under heavy ash fall. That event had a volcanic explosivity index (VEI) of 5.

Fine ash fall that infiltrates into buildings can cause damage to sensitive equipment, potentially leading to widespread interruption of business and services. Removal and cleanup of deposited ash can lead to rapidly rising costs, particularly in cases where eruptions last weeks and months. For example, Mt. Sinabung’s eruption on February 19, 2018, (VEI 2, Indonesia), generated large volumes of ash that covered homes and farmlands, requiring a large cleanup operation.

Furthermore, specific industries are highly vulnerable to volcanic ash—for instance, crops and pastures could be severely affected and the tourism industry may be repeatedly impacted in countries with very active volcanism. The 1995-1996 eruptions of Mount Ruapehu in New Zealand (VEI 3) caused disruption to several local industries such as tourism, agriculture and aviation. Those registered a total estimated cost to the economy of around $104 million. A very small eruption at Mt. Hakone in Japan (VEI 1) in June 2015 caused a 15-month closure of one of the most popular tourism spots in the vicinity of Tokyo, the Owakudani Park hot springs resort, which receives 20 million visitors annually. This had a major impact on the local economy as the number of tourists declined by 18 percent from the previous year.

The aviation industry is particularly vulnerable to ash from volcanic eruptions, which may lead to temporary flight cancellations and shutdown of airports as well as material damage to aircrafts. In Indonesia, small eruptions cause relatively frequent disruption to the aviation and the tourism industries. In 2018, there have been airport closures and flight cancellations on three occasions so far, associated with eruptions from Mount Sinabung in February and April and Mt. Merapi in May. Mt. Agung’s sustained eruptions in November 2017 sent ripples through Bali’s local economy with estimated losses amounting to $1.47 billion, due to lost revenue of airlines and the local tourism industry.

Volcanic ash is the eruptive hazard that is most frequently considered, however, volcanic eruptions can produce a whole range of hazards with a large potential for devastation. The current Kilauea eruption (Hawaii, having started May 3, 2018, and still ongoing) has produced extensive lava flows covering over 5,000 acres of land and has destroyed 700 dwellings so far, damaged sections of highways, and forced the shutdown of the geothermal energy plant that provides about a quarter of the islands’ electricity.

A majority of the recent eruptions correspond to the small-to-medium severity spectrum of volcanic eruptions. Just because large and very large eruptions have not occurred in densely populated areas in the recent past, we cannot ignore the catastrophic impacts such events could have nowadays.

In Asian countries, we have not-so-distant examples of very large volcanic eruptions that would cause havoc in the populations and the economies should they occur at present. A repeat of the December 1707 Mt. Fuji eruption (VEI 5, Japan) could result in losses of over $22 billion. This estimate does not include impact on aviation, other transportation and electric transmission facilities, which could effectively paralyze Tokyo and the surrounding urban and industrial enclaves. Mt. Tambora’s 1815 eruption (VEI 7, Indonesia) is the largest ever recorded by humans. That eruption caused an estimated death toll of 71,000 people due to the immediate explosion, the secondary tsunami waves striking several Indonesian islands, and famine related to eruptive fallout ruining crops in the region. At present, over one million people live within 100 kilometers of Tambora.

Lloyd’s City Risk Index for 2018 reports the top-20 cities in the world that are at greatest risk of volcanic eruptions. Of those, more than half (11) are in Asia-Pacific countries: Tokyo, Osaka, Yokohama, Nagoya and Sapporo (Japan), Jakarta and Bandung (Indonesia), Taipei (Taiwan), Manila (Philippines) and Singapore.

The countries with the largest number of volcanoes in the Asia-Pacific region are Indonesia, Japan, Papua New Guinea, the Philippines and New Zealand. In these countries, small/moderate eruptions (VEI =< 4) occur roughly on an annual basis, whereas large and very large eruptions (VEI >=5) are estimated to have associated return periods ranging between 50 and 550 years (Exhibit 2).

The Role of Insurance

There have been some initial attempts to develop volcano-specific risk transfer products. For instance, Sompo Japan Nipponkoa offers a parametric product targeted at commercial corporates in the tourism sector that covers customer loss from cancellations associated to imminent eruptive activity up to $10 million. One of the main barriers to developing volcano-specific risk transfer products is the lack of catastrophe models for volcanic eruptions. Guy Carpenter has recently developed a fully probabilistic ash fall model for six volcanoes in Japan (Fuji, Hakone, Asama, Haruna, Kita-Yatsugatake and Kusatsu-Shirane). Eruptions from these volcanoes may affect the highly populated and industrialized prefectures of Tokyo and Kanagawa. The model estimates damage to residential, commercial and industrial buildings arising from the vertical loads imposed by ash on the structures.

Furthermore, the model considers the possibility of ash fall—producing eruptions concurrent to rainfall. The interaction of volcanic ash fall with rainfall may lead to an increase in the weight of the former due to absorption of water, leading to increased loads and consequently to more severe damages.

*Volcanoes classed with a volcanic explosivity index (VEI) of 4 and above are considered large explosions. The VEI is a relative measure of the explosiveness of volcanic eruptions devised by Chris Newhall and Stephen Self in 1982. The scale is open-ended with the largest eruptions in history given magnitude 8. The scale is logarithmic from VEI 2 upward, with each interval on the scale representing a tenfold increase in volume of eruptive products.

Delioma Oramas Dorta is a catastrophe risk analyst at Guy Carpenter. She recently led the development of a catastrophe risk model of volcanic ash fall potentially impacting the densely populated prefectures of Tokyo and Kanagawa in Japan.

Tony Gallagher Regional CEO, Asia Pacific at Guy Carpenter
URL: https://www.brinknews.com/volcanic-eruptions-a-complex-and-largely-overlooked-risk/
Get ahead in a rapidly changing world. Sign up for our daily newsletter. Subscribe
​​