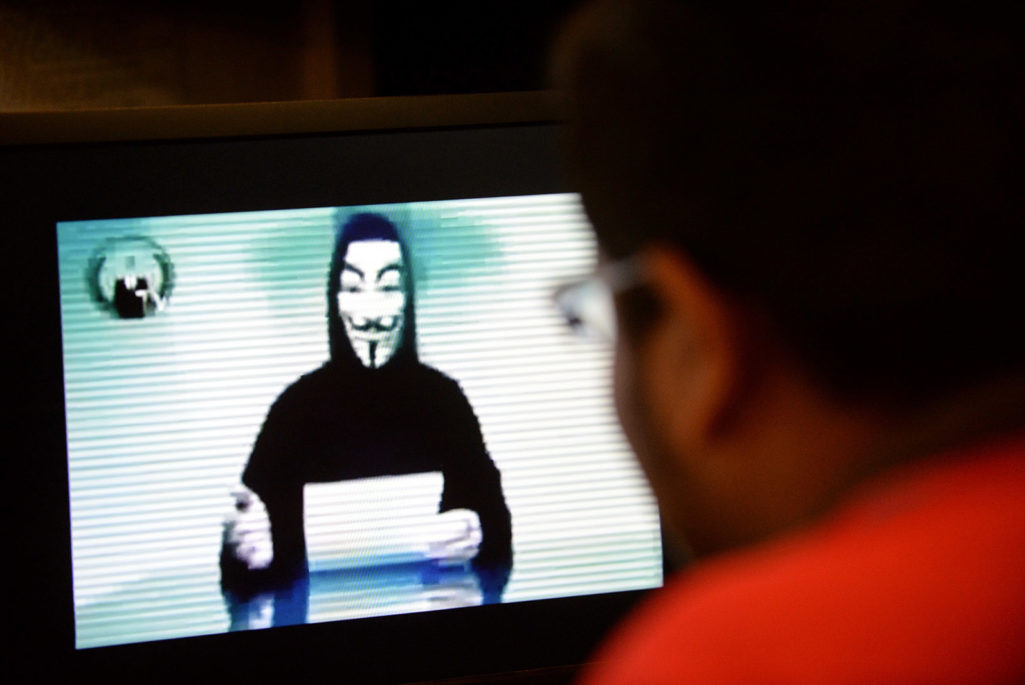 Activist group Anonymous hacked a Singapore newspaper website and threatened wider cyber attacks over Internet freedom, with government agencies reportedly on alert after the group said it would 'wage war' with the city-state.

[Editor’s Note: Cybercrime has led to one of the greatest thefts of money, information, intellectual property and state secrets in modern history. The security, economy, vital infrastructure and personal safety of people in the U.S. and other countries are at risk. The risks are ubiquitous and systemic, yet the efforts to address them have been largely uncoordinated.

Socrates is known to have declared, “The only true wisdom is in knowing that you know nothing.” This became a starting point for his pursuit of knowledge.

On the issue of cybersecurity, the world is in the early stages of the Socratic process. Throughout the private and public sectors, there is justifiable apprehension about how little we understand and how much more needs to be done.

Now is the time to become wiser for this admission.

There is complexity and nuance to the subject of cybersecurity. There is also more than enough common ground for everyone to grasp the magnitude and ubiquity of the threats and our limited means of response. Whether natural or man-made, virtually every catastrophic threat reinforces at least four lessons about risk-management. The cyber threat is no different.

Cybersecurity is a multidimensional problem that transcends the risk management and response capabilities of any single community—technology, defense, law enforcement, public policy and business. No group has an answer or even a claim to superiority. All share in the exposure.

With so much at stake, why has there been so little collective progress?

Fifty years ago, Bob Dylan offered this utilitarian insight about risk management from “Subterranean Homesick Blues”: “You don’t need a weatherman to know which way the wind blows.” It is obvious which way the wind is blowing, and it is time to take collective action.

Ten years ago, the 9-11 Commission shared one of its principal findings about the “attacks that changed everything”: Just because events come as a shock, [this] doesn’t mean they arrive as a surprise.

With recognition that any comparison to 9-11 must be undertaken cautiously and respectfully, we recently re-read the 9-11 Commission report. We did so because so many security experts believe that the world is at a similar inflection point with respect to our collective state of preparedness for digital exposures. The Commission reached an overarching conclusion about exposure to terrorism: Even our most consequential threats can be prevented or mitigated with the benefit of shared recognition, shared intelligence and shared action.

As reflected in the Commission’s findings and recommendations, our approaches to complex risk must offer transparency, utility and resiliency to be effective.

Here then is a proposal with respect to cybersecurity efforts for the U.S., offered in the hope that other countries will benefit from the effort and can develop their own versions of the same solution. Within this moment of relative calm, we have the opportunity to provide foresight, not hindsight; a biopsy, not an autopsy; a blueprint, not a Code Blue.

The U.S. President and Congress should appoint a 9-11-type Cyber Threat Commission. This Commission should:

Coming waves of cyber attacks promise to be more than any one enterprise, sector or country will be able to handle.

No “big bang” event is required. The Commission must answer these questions:

Every day brings new cyber threats. And the coming waves of attacks promise to be more than any one enterprise, sector or even country will be able to handle.

The Internet was constructed for universal connectivity and accessibility—not with an eye toward containing the darker sides of human behavior. The Internet has delivered on its promise of social and economic progress. Unfortunately, it has also delivered unparalleled opportunities to those seeking to scale global conflict, terrorism, criminal activity, state and industrial espionage and vandalism.

Highlighting our worldwide exposures, the Global Commission on Internet Governance explained that in the packet-switched networks and data clouds of the Internet, the communications and data of all parties are mixed together. Put in context, we drive on the same information super-highway to work, school and play, as those seeking to drive home a wide range of threats. Indeed, the Internet may need to be reconstructed.

When it comes to our global state of preparedness, and our ability to respond, here are some widely accepted views from experts in the public and private sectors:

A review of these views leads to only one conclusion: A comprehensive and collective report, in close cooperation with the private sector, is needed and overdue. International public-private sector input will be essential in this effort.

History rightfully delivers a harsh judgment when we fail to come together to protect the public interest against known threats. As a result of the tragedy of 9-11, we have a model to address our most complex threats in advance of a crisis. Now is the time to apply it to the clear and present dangers of cybersecurity.

Others contributing to this piece include:

Stephen Labaton is president of the global communications firm Finsbury, and a former senior writer for The New York Times.

Frank J Cilluffo, is the director for George Washington University’s Center for Cyber and Homeland Security, a senior advisor to RANE, and formerly served as special assistant to the President for homeland security.

Tim Murphy is vice president of MacAndrews & Forbes — while remaining active in various public-private sector efforts to address cyber and homeland security; and formerly served as deputy director of the FBI.

Ed Stroz is the founder and executive chairman of Stroz Friedberg, specializing in cyber security and risk management; he is a former special agent for the FBI and helped form the FBI’s Computer Crime Squad.

John Squires is a senior partner at the law firm of Perkins Coie, specializing in intellectual property and technology law and served as chief IP counsel for Goldman Sachs.

Matthew Lawrence is a legal and IP researcher at Perkins Coie and will be attending Fordham University Law School.

Curtis Hougland is an expert in social media and marketing and is the founder of Attention.

The authors acknowledge the contributions of Carl J. Schramm (University of California), formerly CEO of the Kauffman Foundation; Amit Sharma, senior advisor to RANE and former senior advisor to the U.S. Treasury Department on terrorism and illicit finance; Adam Robinson, CEO of Robinson Global Strategies. Although not directly involved in this article, we recognize the security leadership of various firms, including: CrowdStrike, K2 Intelligence, Kroll, Mandiant, the Promontory Group, Recorded Future and Red Owl.

Disclaimer: The views expressed by the authors are entirely their own and should not be attributed to any of the institutions with which they are — or have been –affiliated.

Founder and Chief Collaborative Officer of the Risk Assistance Network+Exchange

Jay Clayton is co-managing partner of Sullivan & Cromwell’s General Practice Group. He is also an adjunct professor at the University of Pennsylvania Law School.

Bart Édes Distinguished Fellow at Asia Pacific Foundation of Canada
URL: https://www.brinknews.com/we-dont-need-a-crisis-to-act-unitedly-against-cyber-threats/
Get ahead in a rapidly changing world. Sign up for our daily newsletter. Subscribe
​​