What Can We Learn About Education Financing from South Korea? 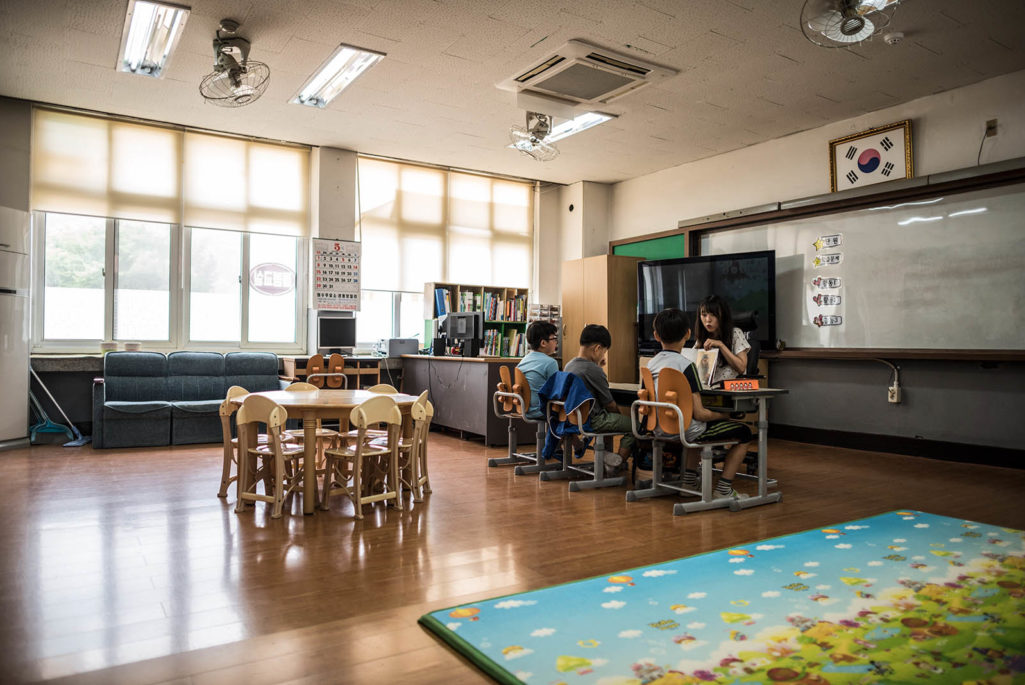 Students attend a class at the Seoksan Elementary School in Gunwi, a remote, rural area which lies some 200 kilometers southeast of Seoul.

Education is one of the most powerful instruments for reducing poverty and inequality. It also lays the basis for sustained growth. Better schooling investments raise national income growth rates [as has been clearly demonstrated by South Korea]. In nearly all countries, though to varying degrees, educational progress has lagged for groups that are disadvantaged due to low income, gender, disability or ethnic and/or linguistic affiliation; however, there is an ongoing education revolution occurring.

More people are in school now than ever before. Globally, in 1900, the average level of schooling was less than two years. It was just over two years in 1950 and more than seven years in 2000, but it is projected to grow to 10 years by 2050. This is a more-than five-fold increase in a century and a half.

This tremendous demand for schooling makes sense from an economic point of view. The returns are high around the world.

Yet, despite this revolution, there is a crisis in learning and a financing gap to go along with the need for innovation. Too many children are yet to enroll in school—124 million—and a staggering 250 million are in school but not learning. It will take considerable national and international effort to address these issues. Development assistance can only do so much since most education spending is domestic. Better allocation of resources is needed and innovative ways to use it are called for.

In most countries, education systems are not providing workers with the skills necessary to compete in today’s job markets. A mastery of skills early on is needed.

The Role of ‘Official Development Assistance’

Official development assistance is a term coined by the Development Assistance Committee (DAC) of the Organization for Economic Co-operation and Development (OECD) to measure aid. Given the high returns, significant learning gaps and the number of children out of school, the priority is to invest in relevant skills. These include problem-solving skills, learning skills, communication skills, skills for self-management and social skills.

The problem, however, is that one in four young people in developing countries are unable to read. Moreover, Official Development Assistance (ODA) is limited to about $160 billion a year.

Therefore, ODA efforts need to be focused, catalytic and innovative. Investment needs to be focused and evidence-based. A good, healthy start is needed. Invest early in early childhood development  and early reading programs.

What can we learn about education financing from Korea and apply to ODA programs? Here are five ideas from Korea that the world can learn from.

As Korea did many years ago, countries need to get the fundamentals right. That means investing in basic education. In two generations, Korea went from being a country with mass illiteracy to becoming an economic and educational leader. These are important lessons for the rest of the world, particularly countries grappling with poor reading skills.

So, step one would be to scale up early reading programs that work. There are cost-effective interventions out there that can improve reading rapidly. In Tonga, community playgroups lead to significant reading gains, on average 0.24 standard deviations in just one academic year, at a cost of only $67 per child.

This results in a benefit-cost ratio—evaluated only with future labor market earnings—of almost 5:1. In Papua New Guinea, a reading intervention program boosts reading scores by 0.51 standard deviations at a cost of $60 per child.

Public financing of private provision can lead to significant gains in a cost-effective manner. For decades, the Korean government has been supporting the private sector at the secondary school level. This has helped contribute to creating one of the most successful education systems in the world. Korea ranks high in international student assessment rankings such as the OECD’s PISA.

The private sector has been growing worldwide, but especially in developing countries. Over the last two decades, enrollments in private schools have more than doubled in low income countries. There are different ways of delivering education services. If other countries leveraged their private sector to advance public sector goals in education, we would reach international targets much sooner.

High private returns for tertiary education calls for innovative financing mechanisms that will expand access and effective demand for enrollment, especially among the poor. High private returns could be used to justify cost-recovery, but also income-contingent loans and human capital contracts.

To get workers ready for jobs, industry links for skills formation are needed. Employer-led training is an effective mechanism in Korea. Skills development has played a central role in driving Korea’s rapid economic development. The Korean government has invested in improving the quality of vocational training based on future skill needs. Schools are encouraged to collaborate with industry. Employers play a strong role in supporting skills development.

Use multilateral loans to finance postsecondary education and training. Another example in technical education from Korea is how higher education was financed. Using a World Bank loan in 1980 (the $100 million Sector Program on Higher Technical Education), the Korean government on-lent funds to private institutions.

Not only was it the World Bank’s first sector operation in education, it was also one of the first public-private partnerships in education. The objective was to improve Korea’s higher technical education system to cope with increasingly sophisticated demand for labor. In total, 50 colleges were supported.

In contrast to earlier projects and most other higher education projects of this period, the project covered “the whole sub-sector, public and private.” This was truly an innovation, and 36 years later, would still be an innovative approach to financing technical skills.

This piece first appeared on the World Bank Blog.

Harry Anthony Patrinos is a Manager at the World Bank’s education sector. He specializes in all areas of education, especially school-based management, demand-side financing and public-private partnerships. He is one of the main authors of the report, Lifelong Learning in the Global Knowledge Economy (World Bank, 2003).