Stratos Ramoglou
Lecturer in Strategy and Innovation at U. of Southampton 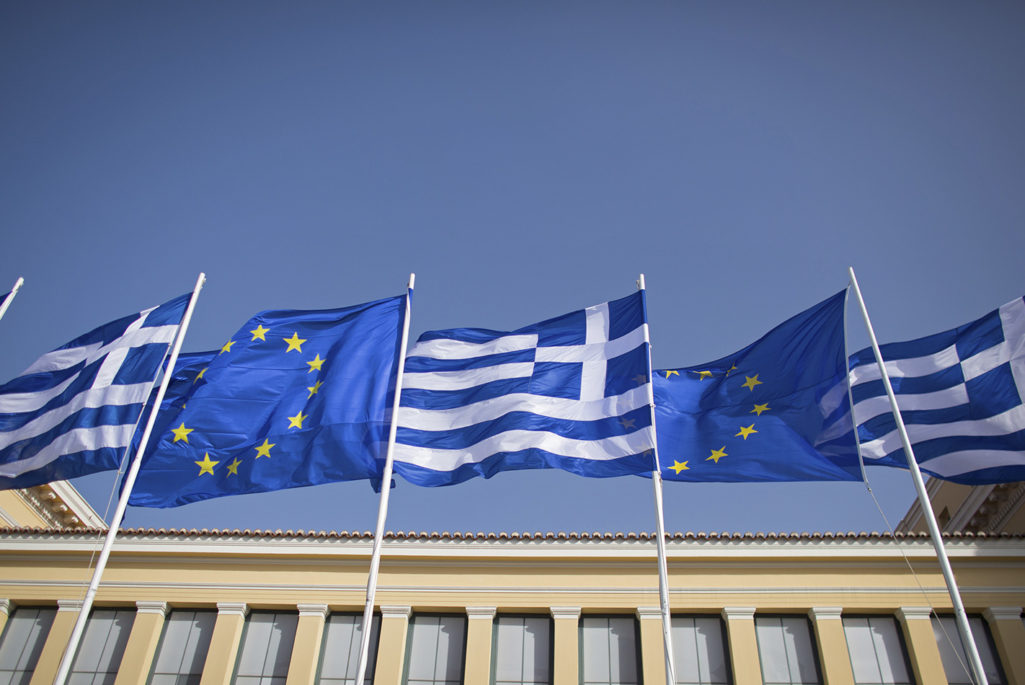 The national flag of Greece and the flag of the European Union fly above a government building.

With another impending international debt deadline, Greece runs the risk of becoming the first OECD country to default on its obligations to the IMF. The country owes $495 million and many are once again raising the “specter of Grexit” idea, accompanied by damning commentary on Greece’s failure to get successfully through the crisis.

[Editor’s note: Greece paid the $495 million earlier this month, but still owes another $2.65 billion to the IMF by the end of June.]

Mainstream accounts of Greece’s economic situation emphasize how the so-called troika (the European Commission, European Central Bank and International Monetary Fund) has been aiding Greece by throwing it a much-needed financial lifeline of billions.

All this bailout money is supposedly helping to keep the country afloat and prevent the Greek economy from going bankrupt. But in spite of all this aid, the Greek economy keeps sinking and Greeks apparently only seek to satisfy a growing appetite for easy money.

These popular accounts are, however, full of misconceptions over the nature of the financial aid Greece is receiving and serve to damage the prospect of a more balanced understanding of the situation—and effectively stymie chances for a more viable solution. Greece emerges as a country morally indebted to the troika’s help, only against the backdrop of a quite dangerous mythology, consisting of a constellation of falsehoods, dogmatic hypotheses and unwholesome oversimplifications.

But Where Has All the Money Gone?

The vast majority of the financial lifeline meant to save Greece has never entered the Greek economy. The record loan of $260 billion was mostly channeled directly for debt-servicing purposes. It was primarily meant to prevent—chiefly French and German—financial institutions from suffering losses, by ensuring that European taxpayers bought an (unpayable) debt. This, all in the name of “Greek aid.”

Moreover, Greece’s primary surpluses since 2013 mean that it needs cash only in order to service the massive debt that the bailout money has kept in place. The Greek state has sufficient money for its domestic needs but cannot simultaneously afford to repay billions of debt at this point—not without turning a blind eye to its most needy citizens.

Still, the nature of the bailout is overshadowed by deceptive representations that give the impression that the Greek economy is rescued by being the recipient of billions of euros. It would be truly interesting, indeed, to know how many of Europe’s taxpayers know that more than 90 percent of the $260 billion borrowed by Greece went directly to financial institutions.

In early 2010 it became apparent that Greece had an unsustainable debt burden. Yet bailing out the debt—not Greece—only served to postpone the inevitable, whereas austerity policies (euphemistically baptized as “reforms”) have severely weakened Greece’s debt-servicing capacity. Among other things, they have forced Greek GDP to contract by roughly 25 percent, and the debt to GDP ratio to skyrocket from 120 percent to 175 percent.

Once the true nature of the bailout is unmasked, it is not surprising that the Greek economy is not recovering. In fact Greece cannot recover precisely because of the bailout. Fighting a debt problem with more debt is like trying to put out fire with gasoline.

Saved from Stigma and Grexit?

Many would argue that all this bailout money helps prevent Greece from suffering the stigma of a default. A bankruptcy would make the Greek state untrustworthy in the eyes of financial markets, as the story goes. But Greece has been—unofficially—bankrupt since 2010 and it is questionable whether a formal bankruptcy could damage its financial credibility as a creditor any further. Instead, it is plausible to conjecture that Greece would be attractive to investors only once it has a more sustainable debt. It is worth noting in this regard that, although Greece has suffered ramifications probably harsher than the effects of a bankruptcy, it has yet to benefit from bankruptcy’s debt-liberating effects by being repeatedly “rescued” and not being allowed to “go bankrupt.”

This proposition begs another question: Doesn’t Greece still benefit from being helped to remain in the Eurozone? As is often remarked, a full-blown bankruptcy would be dovetailed by a Grexit with unknown, yet arguably dire, consequences. Granted. But what is nonetheless conveniently unexamined is why these prophecies would likely be fulfilled.

A Grexit is portrayed as the natural effect of the workings of economic laws. However, a Grexit would not be caused in the ways that earthquakes are caused by seismic waves. It would be the outcome of political decisions that would render staying in the Eurozone fiscally intolerable. Nobel laureate, Paul Krugman, hits the nail on the head when remarking that:

[I]f Greece is driven out of the euro, it will be because Brussels and Frankfurt have in effect chosen to hold the Greek banking system hostage, and Greece has declined to pay ransom.

Moving on From the Blame Game

Greece does not need more so-called bailout money—only breathing space from pressing debt obligations and German-style austerity. This is especially the case given that Greece has witnessed an economic catastrophe unprecedented in modern times for an advanced Western economy that is officially worse than the U.S. Great Depression.

No doubt, the Greeks are responsible for the recklessness of the pre-2010 era, largely due to a bloated and clientistic public sector. Five years later, however, the prescribed remedy has proved even more lethal than the problem it meant to cure—while simultaneously leaving the core structural problems significantly untackled. As Yanis Varoufakis, Greece’s finance minister aptly put it: “Europe’s medicine is worse than the disease,” echoing the assessment from another Nobel laureate, Joseph Stiglitz, according to whom:

Greece made a few mistakes … but Europe made even bigger mistakes … It led the debt to grow up and the economy to go down.

Clearly, the focus on who is to blame is misplaced and unwholesome. It only manages to oversimplify matters by encouraging unbalanced and distorted understandings of what is an exceptionally complicated saga with several chapters, underpinned by an intricate web of economic, political, ideological and ethical agendas.

Yet, persistent misconceptions over the nature of the Greek bailout play a subtle but key role in sustaining a damaging mythology and prevent a viable treatment of the crisis by enabling self-nominated rescuers to stubbornly refuse their co-responsibility.

Even worse, balanced understanding is further clouded by strong doses of Old Testament-style populism and moral hazard fundamentalism. This has been the cherished approach of Germany’s finance minister, Wolfgang Shäuble, who incidentally shares a big chunk of the responsibility in the disastrous management of the debt crisis.

Lastly, I do not advocate that Greece should not fulfill its financial obligations. But what I find quite alarming is that, whereas a default on debts is treated as unquestionably unacceptable, a default on humanitarian ideals is treated as unavoidable—if not celebrated as a noble sacrifice in the altar of financial stability and “economic progress.”

Lecturer in Strategy and Innovation at U. of Southampton

Stratos Ramoglou is a Lecturer in Strategy and Innovation and Director of undergraduate Business degrees at the University of Southampton. Stratos joined the Faculty of Business and Law in September 2013