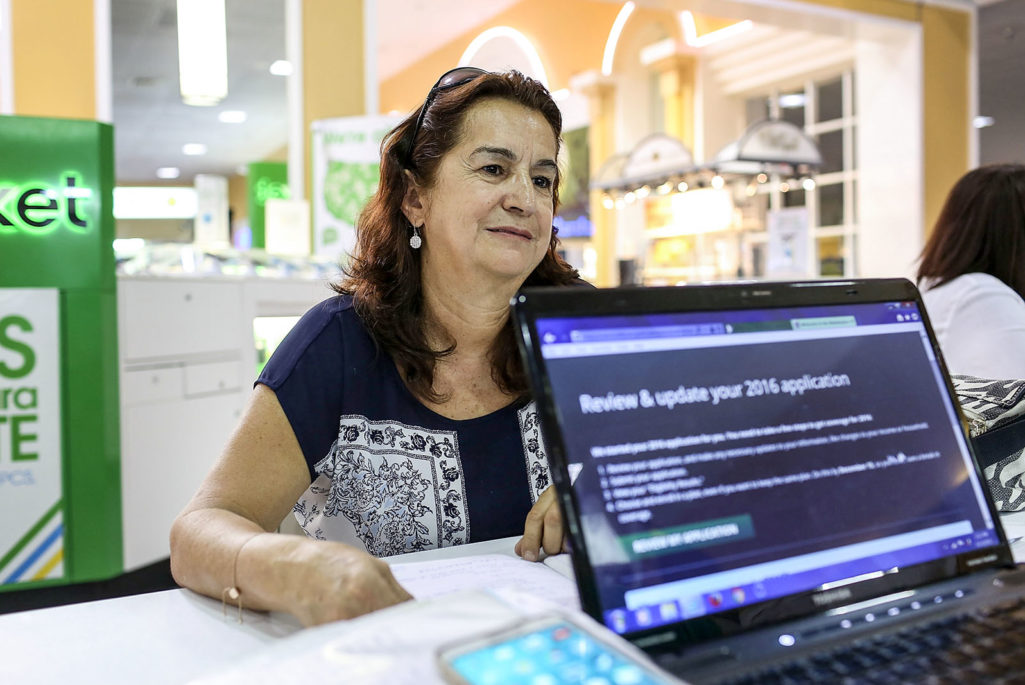 Martha Lucia sits with an insurance agent as she picks an insurance plan available in the third year of the Affordable Care Act at a store setup in the Mall of the Americas on November 2, 2015 in Miami, Florida.

With nine U.S. health insurance co-operatives announcing closure or being forced to shut down during the past year over concerns about their solvency, the viability of their business model has come into question. Created under the 2010 Affordable Care Act (ACA), the co-operatives were designed to provide competition in the health insurance market and protect consumers from aggressive pricing by some of the larger and more established for-profit insurers.

However, with the recent hemorrhaging, only 14 of the 23 health insurance co-ops have survived. Meanwhile, the casualties are stacking up. For one, more than 500,000 customers of the failed co-ops must find alternative insurers. Secondly, health insurance premiums could rise next year with the reduced competition. Premiums could rise also because a projected flat growth in enrollees for next year might mean fewer healthy people in the risk pool for insurers. Third, many state-operated health insurance exchanges could move over to the federal marketplace, preferring to avoid the complications of running them on their own.

“Congress should probably just sit tight and do nothing and see how this plays out,” said Wharton professor of health care management Scott E. Harrington. “I don’t think we want to be in the business of providing more money to companies that don’t appear to be sustainable.” Harrington is also professor of insurance and risk management at Wharton.

According to Wharton professor of health care management Robert J. Town, “[The co-op proposal] was perhaps not the best conceived idea that Congress has ever had.” It was a substitute and a political compromise for having a federally sponsored health plan, he explained. “It’s cobbled together and not necessarily thought out that well. The financing and the incentives for the co-ops are not necessarily the most aligned for success.”

New York Times health care reporter Reed Abelson predicted that some of the co-ops will succeed, “but you have to step back and wonder whether the whole notion of the co-op as an alternative insurer is going to succeed.” If the co-ops survive only in a minority of states, “it is hard to see whether or not they will have the hope for influence that the administration and others thought they might have,” she added.

Concerns over the health care co-operative model came to a head over the past month after co-ops in Oregon, Colorado, Tennessee and Kentucky said they would shut down, although the one in Colorado is contesting its shut down order by the state. Following that, in late September, New York health department officials ordered the Health Republic Insurance of New York to shut down, citing solvency concerns.

Another surprise came on October 1, when the Centers for Medicare & Medicaid Services announced that qualified insurers would get 12.6 percent of their claims, or less than 13 cents for every dollar it owes them, for unexpected losses they incurred in 2014, under the ACA’s risk-sharing mechanisms.

The government’s objective in creating these co-operatives was to boost price competition against large, for-profit private insurers and bring down premiums to affordable levels. Under a so-called “Risk Corridors” program, the government would share risks for three years with issuers of select health care plans, to help them cope with uncertainties in claims costs.

However, Republican lawmakers have steadily forced Congress to cut funding to the co-operatives from the originally promised $6 billion to $2.4 billion. That includes federal government loans to the 14 failed co-operatives totaling about $1 billion. The Obama administration also found itself hampered in helping the co-ops manage costs in their formative years.

In the meantime, the failed insurers battled both lower-than-expected enrollments and unexpected claims, made worse by generally lower premiums than those of larger competitors. They also blame holes in the safety nets they expected from the government. Those include shortfalls in promised government payments to help them cover unexpected losses, insufficient government funding to help them get started, and restrictions on how they could use those funds (for example, they couldn’t use those funds for marketing). According to Abelson, some of the failed co-ops had significant numbers of members, but because of the losses, they couldn’t continue.

“Competition is indeed vital in health insurance markets, but the co-ops were a bad way to try to foster this competition,” the Washington, D.C.-based Cato Institute said in report on the developments. Former Senator Kent Conrad, the North Dakota Democrat who proposed the co-operatives, said they were “sabotaged,” according to a New York Times report.

Harrington argued that had federal funding to the co-ops continued unchecked, the damage could have been worse. After Congress imposed restrictions on funding the co-ops, the government could not expand the model to more states. “It is plausible that if the money had been there, we would have had more co-ops, but there is no guarantee we wouldn’t have had more financially weak co-ops,” Harrington said. Another aspect of providing more money to the co-ops is the government has to provide additional runway for the companies to accumulate even greater losses, unless it appears they have good prospects to become sustainable.

The Fallout for Consumers

In Iowa, a Blue Cross Blue Shield entity has entered and will pick up some of the slack, said Harrington. In other states, some of the existing insurers are worried that some of the customers they might get from co-ops might not have the same health profile and might be inconsistent with the way they price those policies, he added. “Others, though, are viewing it as an opportunity that if they price their polices appropriately, they could get a bigger flow of customers, and it will be readily digestible.”

“It’s particularly having an impact in rural areas, which have had a hard time attracting enough carriers to have competition,” said Abelson. In some states like Nevada, for example, health insurance consumers will have fewer choices, whereas in others, they would have to go to a big, established insurer like Anthem and United Health Group, she added.

Harrington foresaw short-term disruptions in the states where fairly large co-ops have shut down as people look for new coverage. He noted that the co-ops weren’t charging enough premiums to be sustainable. “If you take out the money-losers, you would expect people have to pay more because they need to pay enough to keep their insurance company in the game,” he said.

Town noted that in most places, the co-ops did not enjoy a large market share, and therefore did not expect big disruptions from the closures. Also, other firms may step in if it makes sense for them and “if there is enough share to gather by entering the marketplace,” he added. While premiums could rise in some of those markets, “in most places [co-ops] weren’t very effective competitors and therefore their impact on the competitive environment is modest.”

Harrington noted that the government has projected modest increases in new enrollments for the next year. “That has led to some concern that we won’t get additional, relatively healthy people into the pool in the next year or two. As a result, there could be further upward pressure on premiums.” Also, many smaller health insurers are worried about the expiration of the stabilization programs included in the ACA, he said. Temporary programs to help subsidize new coverage will expire after 2016. “Given the projected flat enrollment [growth] and the expiration of those [subsidy] programs, there is still a lot of uncertainty about what will happen in the next year and a half.”

Harrington expected “substantial upward pressure on premium rates” when insurers file their rate proposals next summer. If so, he predicts that across-the-board there will be large, double-digit increases, and the issue will get much attention politically in the run-up to the presidential election. Harrington said the preliminary reports for rate increases for 2016 vary across companies and states. Some states have proposed large increases of 25 percent to 30 percent, while others have proposed minimal increases, he added.

Town said premiums have thus far been lower than expected, but they are backed by underlying subsidies. “When those subsidies roll off, that will have a different outcome—premiums could stabilize, or they could take off.”

As Harrington saw it, the health insurance co-ops face a “highly uncertain” outlook. “It will take until 2017 or 2018 if the law doesn’t change to see if the co-op segment of the industry has stabilized,” he said. At the same time, he expected significant changes in the law in that time frame, depending on the outcome of the congressional and the presidential elections.

In a year from now, Harrington said it is possible that only three or four co-ops will survive a shakeout in the industry. Abelson said she wouldn’t be surprised if a couple more of the co-operatives shut down in the immediate future.

The health insurance co-op model has worked well in some cases, and without reliance on government assistance, prompting expansion. For example, the co-op in Maine gained significant market share in that state and reported a profit for 2014, said Harrington. He noted that it did not seek support from the federal government under risk-sharing programs. Riding on its success in Maine, the co-op has decided to expand in New Hampshire. However, in the first half of 2015 it had a large negative cash flow and an operating loss, which Harrington said could be because of the upfront costs of expanding into a new state.

CoOportunity Health in Iowa, for example, had a large market share in its state and had expanded to Nebraska before its liquidation proceedings began earlier this year, said Harrington. However, the health insurance co-op in Montana has expanded into Idaho and “seems to be doing well,” he added.

The original plan was for the successful health insurance co-ops to expand into other states, Town pointed out. However, the environment doesn’t seem encouraging enough for the successful co-ops to enter new states. Harrington noted that insurance regulators are paying close attention to the financial condition of the co-ops. “They are going to be very reluctant, given the track record today, to allow companies to expand unless they feel they have sufficient capital resources to do so,” he said. He also cited pressure on regulators from existing health insurers to ensure that the surviving insurance companies don’t have to pick up some of the claims tab that insolvent co-ops have run up.

Shift to the Federal Marketplace

As a fallout of the current crisis, Town expected many states to move their health insurance exchanges to the federal exchange. “They could find it too costly to operate their own exchange,” he said.

“Health care is really a third rail issue, and a lot of sensible politicians probably think if there’s going to be blame going around, they would rather have it on the federal government than on themselves,” said Wharton professor of health care management Mark Pauly in a recent Knowledge@Wharton article that examined the shift to the federal health insurance marketplace. “Many of them [would] rather put the dirty work on somebody else,” he said.

Republished with permission from Knowledge@Wharton, the online research and business analysis journal of the Wharton School of the University of Pennsylvania.