June 26, 2015 An interview with
Brian Hearing
Co-founder of DroneShield 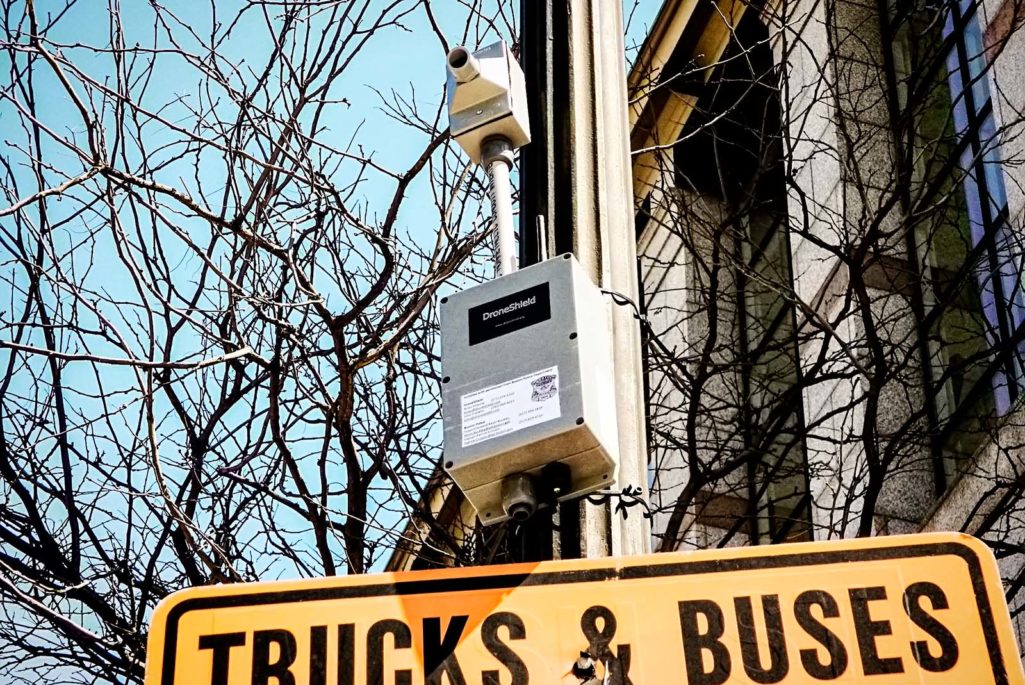 For every bright spot in technological development there is a dark side. The drone industry is no exception. Incidents of drones as security risks have started to emerge: a drone crashes on to the White House lawn, another carrying radioactive sand lands on the roof of the Japanese prime minister’s office and last year the operators of several French nuclear plants sighted their facilities being buzzed by drones. And in Britain a drone was used to fly contraband into a prison.

The nightmare scenario of a fleet of drones buzzing a populated area and spreading a bio-chemical agent isn’t science fiction; many experts believe it’s just a matter of time before someone attempts such an act.

Against that backdrop the nascent anti-drone market has emerged. Intended to act as early warning devices or direct interdiction, several companies have sprung up offering various solutions. BRINK spoke recently with Brian Hearing, co-founder of DroneShield, a U.S.-based anti-drone technology company, about this burgeoning new technology market and the risks it addresses.

BRINK: If drones have not been more than an annoyance at this point, what’s really driving this burgeoning field of anti-drone technology?

Hearing: In some cases, an annoyance might not be a sufficient description. For example, people are sneaking in cell phones, drugs, equipment and weapons into prisons. There are drones that have the potential to fly inside aircraft and kill hundreds of people on board.

In the security industry, you don’t prepare for what has already happened, you prepare for what could happen. Certainly those drone cases point to trends or the possibility of people using drones intentionally for misuse, which means that things can get much worse. For example, intentionally trying to collide with an aircraft, strapping explosives or poisons and flying them into crowds over stadiums or VIP events. Just because something so far hasn’t intentionally been done successfully with large impact doesn’t mean that it can’t happen in the future and that the security industry shouldn’t be preparing.

BRINK: Can you explain how the DroneShield technology works?

Hearing: Passive acoustics listen for the sound of drones. When we hear a noise, we compare that spectrum to that of our database of drones. If we find a good enough match, we issue an alert. The alert can be sent via text message or an email, or as complex as the end-user wants. This can also be integrated with video management systems and automatically have a camera over to the site to verify if it’s actually a drone.

BRINK: So far, who is purchasing or using anti-drone technology?

Hearing: It’s a wide range. One key area of use is for determined executive protection, which are celebrities and others like that. Other purchasers include prisons, airports, outdoor stadiums and other outdoor facilities, and local or federal governments, including the military.

BRINK: What are some of the main risks and challenges for this new market?

Hearing: Unfamiliarity or limited experience of drones is the biggest challenge so far. The United States is behind a lot, if not most, of other countries in the use of drones because the FAA has been slow to allow their commercial use—a lot of people haven’t seen drones and don’t see the need for anti-drone technology. As a result the bulk of the market is in other areas, such as Europe and Asia.

BRINK: What are some of the incidents that are driving interest in this technology?

Hearing: In Japan, there was an explosion of interest after the prime minister said someone intentionally flew a drone onto the roof of the prime minister’s house. It had radioactive material. In Europe, outdoor stadiums, prisons and airports are exploring the technology. Somebody in Europe flew a drone with a flag during a soccer match and that triggered this riot where a lot of people were arrested and injured. These are the kinds of real world events that are triggering other countries to adopt drone detection technology ahead of the United States.

In the USA, the technology was used during the Boston Marathon this year where the organizers were clearly concerned about the use of drones, given their heightened sensibilities because of the 2013 bombing incident. Using ten sensors strapped onto telephone poles, the technology was able to cover a decent portion of the marathon route and monitor for any drone use. My understanding is that the Boston police were happy with how the technology performed and now there’s been follow-up from New York and Chicago regarding their outdoor events.

BRINK: Tracking a drone is one thing, but what about nullifying the threat altogether? How do you go about safely taking down a drone in a commercial or a residential area?

Hearing: The short answer is: You can’t and you shouldn’t. The airspace over your head is public. Anybody has the right to be there. In the USA, for example, there are a lot of regulations on interfering with an aircraft. You can’t jam anything, don’t shine a laser at it, don’t take out a firearm and try to shoot it down.

If individuals have concerns about drones near their residence or businesses, there are also local ordinances that police can pursue. A big one is reckless endangerment. There also are privacy expectations; for example, in your backyard, you do not have an expectation of privacy, but inside your house you do. If a drone is close enough to perhaps take a picture inside your windows, that would be violating an expectation of privacy, so police can pursue that.

FAA regulations state you can’t fly a drone within five miles of any airport, heliport, balloon port, glider port, spaceport, or any port that has anything to do with the air. We researched all the records and it’s difficult to find a spot in the country that’s not within five miles of some sort of heliport, whether that be a private heliport that was registered 20 years ago or a huge Class B airport. You can pass that information on to the FAA and say, “Someone is flying this drone within five miles [of a restricted area]” and the FAA can levy fines up to $10,000 if someone is flying a drone too close to one of those areas. So far they’ve only done that once because usually a cease and desist letter is enough.

Despite those caveats, there are technologies to take out drones—for example, a gun that shoots out a net. It’s intended for situations like the Chancellor of Germany Angela Merkel’s press conference a couple of years ago where a political group was harassing her during her speech by flying this drone a few feet in front of her. In that situation, there’s a big crowd and the security services aren’t going to pull out a firearm and shoot at it. This net gun acts as a sort of last resort and doesn’t damage the drone and prevents anybody else from getting hurt.

Brian Hearing is co-founder of DroneShield.

Reid Blackman Author of "Ethical Machines"
URL: https://www.brinknews.com/anti-drone-technology-emerges-to-thwart-potential-threats/
Get ahead in a rapidly changing world. Sign up for our daily newsletter. Subscribe
​​