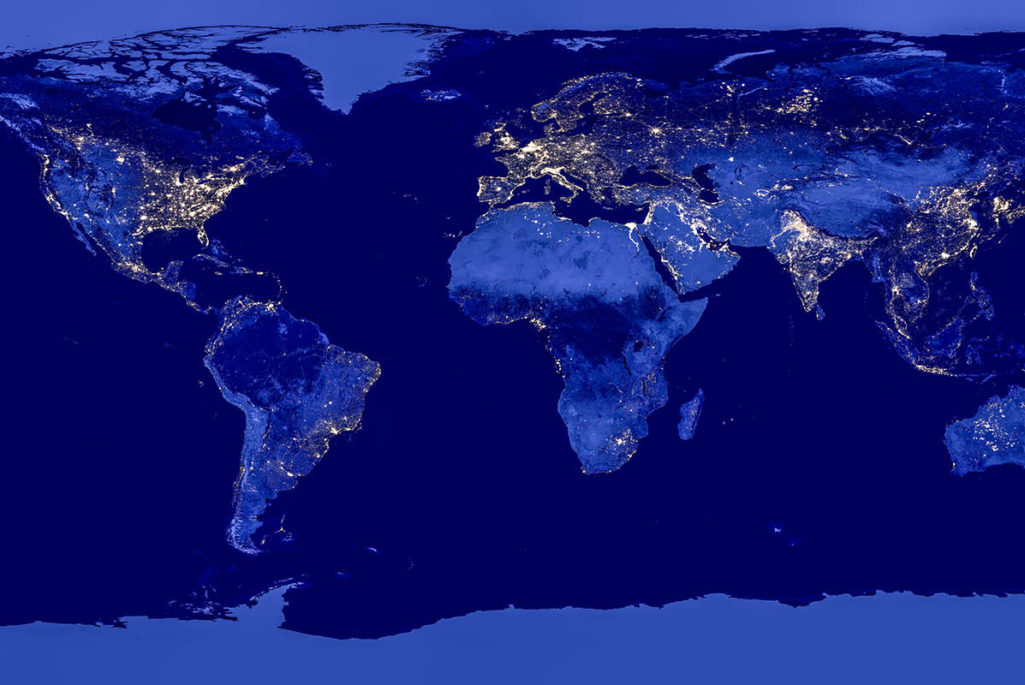 This is image of the Earth at night is a composite assembled from data acquired by the Suomi National Polar-orbiting Partnership satellite over nine days in April 2012 and thirteen days in October 2012.

The world is steadily burning less energy: nearly 33 percent less in the last 15 years, according to the latest figures from the U.S. Energy Information Administration.

But those figures unfortunately don’t account for how much power is going to be needed to turn the lights on for the 1.2 billion people still without electricity.

The reduction in “energy intensity,” measured as energy consumption per unit of gross domestic product, has declined in all regions of the world and across all economies. Energy use varies, of course, among nations and regions with wider temperature ranges and large urban areas. “The distances between urban areas—and the infrastructure within them—can influence the amount of energy used to move goods and passengers,” the EIA said.

Historically, non-OECD countries have had higher levels of energy use owing to the increase in industrialization, which relies more heavily on energy-intensive usage. The flipside of those emerging countries, OECD developed nations, which use an average of 12 percent less energy per dollar of GDP, have begun transitioning away from energy-intensive manufacturing toward more service-based economic activities, the EIA said.

Energy policies—such as building efficiency—among nations also plays a major factor in the decline of energy intensity. Local regulations, incentives and market competition all factor into declines among industrial processes as well. Fuel standards, for example, apply to about 80 percent of world’s automotive market, the EIA said, citing figures from The International Council on Clean Transportation.

Energy productivity, or the amount of economic output for each unit of energy consumed, is inversely related to energy intensity. Within a region over time, several factors contribute to rising energy productivity:

Alan Jenn Assistant Professional Researcher at The Institute of Transportation Studies at the University of California, Davis
URL: https://www.brinknews.com/as-the-world-burns-decreasing-energy-intensity/
Get ahead in a rapidly changing world. Sign up for our daily newsletter. Subscribe
​​