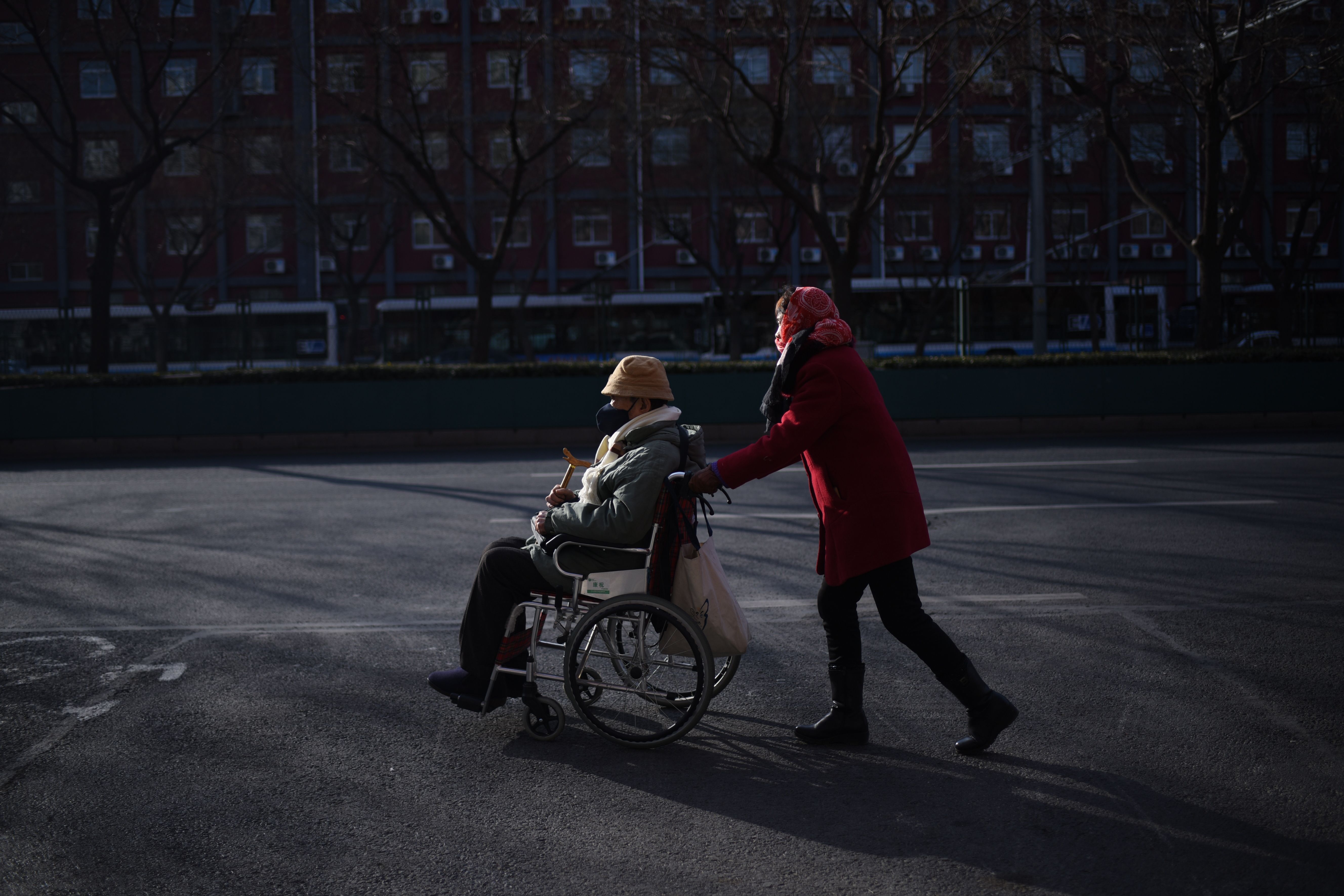 A man is pushed in a wheelchair along a street in Beijing. Elderly populations in Asia and around the world generate greater demand for healthcare services for chronic conditions, including non-communicable diseases such as heart disease and cancer.

The world is experiencing an unprecedented demographic transition–it is getting older. By 2025, 26 percent of the global population will be at least 65 years old.

In Asia, the elderly soon will account for more than 20 percent of the population in China, South Korea and Singapore. Japan already surpasses that figure. Rapid aging also is affecting several low- and middle-income countries in the Asia-Pacific. The share of the population over 65 is expected to increase four- to seven-fold from 2012 to 2050 in India, Mongolia, and Thailand.

There is growing apprehension among countries in developing Asia about whether they will have enough time to successfully adapt to their aging demographic profile, as Japan or Europe have done.

The Effects of Aging Societies

Elderly populations generate greater demand for healthcare services for chronic conditions, including non-communicable diseases such as heart disease and cancer. The aging process speeds up epidemiological changes that manifest as NCDs and other chronic conditions, which are becoming the main cause of illness and account for 75 percent of deaths among the elderly.

A rapidly aging Asia demands swift adaptation and changes. Future education, employment and social protection systems should be geared to enable the elderly to continue working and provide adequate income security long into their 80s and 90s.

There is growing apprehension among countries in developing Asia about whether they will have enough time to successfully adapt to their aging demographic profile.

We also need to promote innovative financing mechanisms and public-private partnerships, and mobilize and reallocate government and private sector funding—including for health insurance—to help build up new health infrastructure that appropriately responds to the needs of the elderly.

To cope with aging populations, countries in developing Asia will have to reconfigure their health service delivery systems and step up ongoing moves around the region toward universal health coverage so older people will not face the risk of financial hardship as they access care.

At present, health systems in many low- and middle-income Asian countries lack the cohesiveness and efficiencies required for universal health coverage. They are fragmented, involving a multitude of national and sub-national government entities, funding agencies and healthcare organizations.

Moreover, there is a lack of coordination between different levels and settings of the health systems, as well as separate funding mechanisms and a wide range of separate financing pools.

Access to quality healthcare in fragmented systems is based on ability to pay, so coverage is inequitably distributed across and within countries. This in turn leads to large disparities in health outcomes within a common system.

Fragmentation has contributed decisively to the misalignment of incentives and a lack of coordination between government service providers, creating inefficiencies in the pooling of funds. It raises concerns about the capacity of national governments and health insurers to function as strong purchasers of healthcare services.

How Can We Respond?

The appropriate response to the changing health needs of aging populations is to shift from acute and episodic care and fragmented systems toward integrated systems that provide a coordinated continuum of care, including home care.

Asian countries, which lifted millions out of poverty just a few decades ago, can rapidly produce the quality elderly care workers who are needed for integrated systems. They can mobilize the financing needed for comprehensive provision of elderly care, just as they did for national health insurance systems.

Countries including China, Indonesia, Laos, Mongolia, the Philippines, Thailand and Vietnam are in the process of scaling up NHI coverage to between 80 percent and nearly all of their population.Benefits would be even more profound if these countries similarly reconfigured their health service providers into integrated service delivery systems, while using their NHI systems as platforms for financing comprehensive elderly care—as is happening in Japan, South Korea and Singapore.

Aging populations pose challenges for health systems, but they also provide an opportunity to make the changes needed to assure better and more responsive care. Inclusive, innovative and resilient health systems will deliver better care to older people with NCDs and other chronic conditions, enabling them to live longer, healthier and more productive lives.

Eduardo P. Banzon champions universal health coverage, and has long provided technical support to countries in Asia Pacific in their pursuit of this goal. Before joining the Asian Development Bank, he was president and CEO of the Philippine Health Insurance Corporation, WHO regional adviser for health financing, World Bank senior health specialist, and a faculty member of the University of the Philippines’ College of Medicine and the Ateneo University Graduate School of Business.