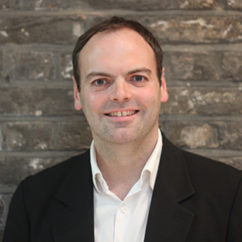 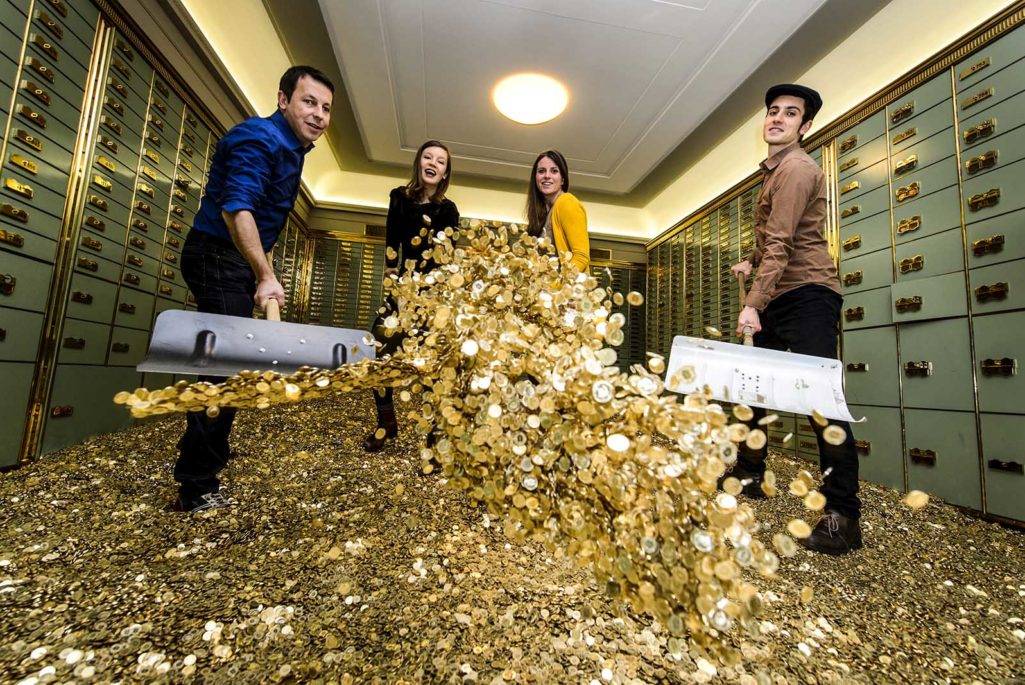 Members of 'Generation Basic Income' pose with eight million coins that were dumped by a truck in front of the Swiss house of Parliament in a symbolic gesture when the activists submitted over 130,000 signatures to organize a nationwide referendum guaranteeing all Swiss nationals a basic income of $2,700 a month.

We like our working classes just as we like our Olympic athletes: lean, happily married, patriotic, hard-working and resilient. Taking this imagined ideal into political discourse in the UK, U.S. and Northern Europe has conditioned the way in which we’ve constructed jobs and welfare markets for the past two to three decades.

In order to limber up those on low to median incomes, we’ve erected some hurdles. It’s quite a simple system: conform or get punished. So they must take work—any work—just to get an income. If these workers have wider responsibilities, want to retrain or just don’t think the job that’s available is quite right, then the welfare system becomes the economic backstop.

Over the past year or so, the idea of Basic Income has been capturing much attention. There are many different versions of Basic Income, but they all contain a key characteristic: a universal payment made to every citizen, without condition.

Much has been made of an impending catastrophe for jobs of automation and artificial intelligence. The numbers are so well-rehearsed that that they barely warrant repetition. Who hasn’t heard of the 47 percent figure for numbers of U.S. jobs that are at risk of automation? The argument is that because of mass and rapid disruption in the jobs market, a Basic Income becomes necessary to shield people from rapid change and obsolescence.

Modern welfare systems are founded on a mixture of political bias and well-meaning social policies of support.

This argument, more than others, has propelled Basic Income into much wider and global discussion. From the current vantage point, the trajectory of technology and its impact on the economy and jobs markets is impossible to discern. We live in low productivity times, as writers such as Robert Gordon have pointed out, and we may see limited or slow economic impacts from new technologies (the impacts on our lives, culture and politics is clearly already highly significant).

Even if we do see significant impact, then there is still the debate to be had over the impact on jobs. Past waves of tech-fueled productivity growth have tended to create as much work as was destroyed, and better work at that—albeit with a high price to pay for particular groups (and the places in which they lived) locked into low-skilled, routine jobs.

Disruptive Market Forces: this Time Could be Different

But this time could be different. It’s hard to look at the sudden disruptive impact of innovations such as Uber and the degree to which they suddenly spread and transformed the cab market (and soon distribution and delivery, presumably also) and not feel some degree of trepidation. Software can be easily adopted by consumers in a way that hardware has slower adoption rates; for example, you can download an app for free, but you might have to wait a while to buy a new car. We just don’t know what the total and particular impacts will be at this stage.

The debate about new technology does shine a light on something deeper, more pervasive and absolutely of the present: insecurity. To return to the lower to median income earner, insecurity is already pervasive—and that is before any particular or general impact of new technology.

Ultimately, technological adoption and change is simply one driver of economic change. Already over the past few decades, we have seen work increasingly becoming disconnected from the traditional job. Just as firms have disaggregated while becoming ever more “platform” and “networked” in form, so has work. Increasingly, work is a more fleeting, flexible, self-directed task rather than workplace-focused (hence Task Rabbit) and more risky for many.

Is Work the Best Form of Welfare?

Accompanying risk from the disaggregated job is the uncertainty of welfare and tax systems. Modern systems of income support are fueled by the notion that work is the best form of welfare. Actually, work is very important and is, in fact, a good way of supporting people. It’s so good that the vast majority of people do it anyway if they can, without the need for any state-led intervention. The problem comes when welfare systems start regarding any work on any terms as preferable to the individual having the scope to map their own way through a fraught landscape.

That’s when the state becomes intrusive, starts to hold the individual to account in a belittling way and even punishes them (as has happened in “sanctions” regimes frequently seen in modern welfare systems). The reality is that people need security to enable them to plan, retrain, assume caring responsibilities and even try new things like setting up a business.

Modern welfare systems are founded on a mixture of political bias and well-meaning social policies of support. Together, this mix is not providing people with the security they need.

Basic Income works differently. It doesn’t assume that workers will lose all motivation without coercion. In fact, Basic Income is designed to give much greater support. It gives people breathing space. Just knowing that there is a degree of security makes an enormous difference. Well-designed Basic Income systems would incentivize work rather than replace it. People need support both into and in work and Basic Income would do that—the state just wouldn’t then default to punitive measures, trusting individuals to make decisions about their lives instead.

Life is not the Olympics. It’s far more fraught and complex. Real-world capability and success have a far greater element of luck than we collectively suppose. Any coming wave of technology could make the terrain even more fraught. Basic Income is simply a support—a wedge of freedom—to help people adapt and respond to pressures that all face.

Despite the fact that Basic Income is a universal program, it pulls the state out of people’s lives—and that will give them some freedom and security to adapt to both the changes we have seen and the changes we could see.

Director of the Action and Research Centre at the RSA

Anthony Painter is Director of the Action and Research Centre at the RSA and author of Creative Citizen, Creative State: the principled and pragmatic case for a Universal Basic Income.

Alain Frachon Senior columnist for Le Monde
URL: https://www.brinknews.com/basic-income-wedge-of-freedom-against-economic-pressures/
Get ahead in a rapidly changing world. Sign up for our daily newsletter. Subscribe
​​