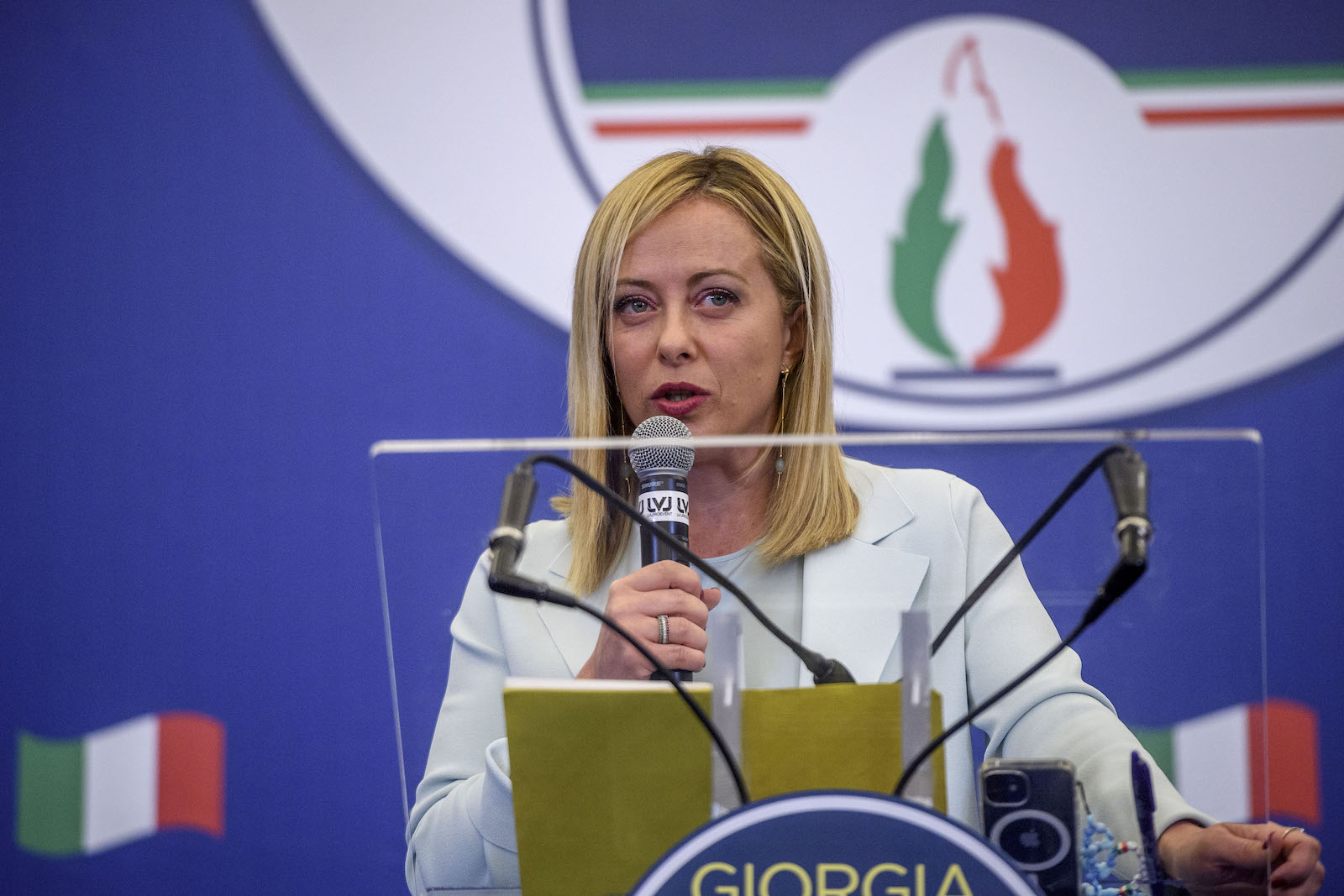 Giorgia Meloni, leader of the Brothers of Italy, speaks at a press conference at the party electoral headquarters overnight, on September 26, 2022, in Rome, Italy. The snap election was triggered by the resignation of Prime Minister Mario Draghi in July, following the collapse of his big-tent coalition of leftist, right-wing and centrist parties.

The victory of the national conservative party, the Brothers of Italy (FDI) of Giorgia Meloni, will cause anxiety around Europe, in Brussels, but especially in the so-called core countries, France and Germany.

The symbolism of a post-fascist party soon holding the levers of power in one of the founding member countries of the European Union won’t be lost on mainstream European politicians who built the union as a response to the Second World War and the dark times of fascism in Italy and Germany. In France, especially, Meloni’s victory could embolden the French far right, while Germany’s traditional skepticism about sharing fiscal risks with European partners will no doubt also receive a new boost.

Another Warning Shot for European Democracy

As happened in the last election of 2018, when the populist newcomer 5 Star Movement (M5S) rose to power, a majority of Italian voters opted for an untested outsider amidst widespread fears of impending economic decline. As such, the election result should not be seen as a vote for a coherent arch-conservative and anti-immigration agenda, but simply as another attempt at making a fresh start.

A majority of Italians clearly still sees populism as the only possible agent of change. Divisions amongst the center-left parties as well as a new electoral law made the result even more striking, giving the center-right coalition a comfortable majority in the new parliament. Meanwhile, a record number of voters stayed home.

At the same time, the poor showing of the populist parties that dominated the last election — the far-right Northern League of Matteo Salvini and the 5 Star Movement lost more than half of their support among voters — demonstrates that voters have become even more impatient with politicians of all stripes and are ready to punish them quickly if they don’t deliver on their promises. This is a lesson that Meloni will no doubt have to keep in mind if she becomes prime minister. Hence her careful tone after her victory, trying to avoid over-promising.

During her campaign, she promised the European Commission that the ‘era of the gravy train was over.’ She also said she would not refrain from slamming the fists on the negotiating table when needed.

Is the Vote a Repudiation of the Draghi Government?

Not necessarily, as most polls over the past weeks and months have shown. Rather, the vote demonstrated that with the former central banker on his way out, most voters seemed to doubt that any of the representatives from the coalition that supported him would have been able to continue his work. I met quite a few ardent Draghi supporters over the past few days who happily admitted they voted for Meloni, despite the fact that she opposed Draghi in parliament.

It is now the responsibility of the country’s president, Sergio Mattarella, to appoint a prime minister. If chosen, Meloni could form a government by the second half of October. However, given the relative weakness of Meloni’s potential coalition partners, it would not be surprising if tension within the alliance appeared early, especially given the difficult winter months ahead, with the country heading toward recession amid a worsening energy crisis and many difficult choices to be made.

Key appointments to watch are the Ministry of Economy and Finance and the Ministry of Foreign Affairs and International Cooperation. The former is notable because the new government will have to present a budget in record time, which also necessary to continue receiving EU pandemic-related recovery funds; the latter because it will signal how determined Meloni is to continue pursuing the international commitments made by the Draghi government, especially with regards to the war in Ukraine.

Meloni has recently made a shift toward a more moderate stance, aligning with NATO and endorsing support to Ukraine against Russia’s invasion. Her more Russia-friendly potential coalition partners did not fare well enough to dictate a change in the country’s pro-Ukraine and pro-sanctions policies. But this dynamic could change if the economic downturn worsens and Italians become even more restless because of the impact of the energy crisis.

Meloni Is a Euroskeptic

As recently as 2014, Meloni called for Italy to drop the euro. However, she has since softened her tone on Europe and will try to avoid any immediate confrontation, fearing adverse market reactions at a critical time for Italy. She is president of the European Conservatives and Reformists, a pan-European umbrella group, and feels more affinity to Hungary and Poland rather than France and Germany, which suggests a power shift within the EU and will make life in the European capital of Brussels more challenging.

During her campaign, she promised the European Commission that the “era of the gravy train was over.” She also said she would not refrain from slamming the fists on the negotiating table when needed. The difficult search for a common EU mechanism to cap oil and gas prices and reform the energy market will provide an early test for the new Italian government, as it requires a strong willingness to compromise.

Meloni will no doubt try to expose the shortcomings of Europe’s immigration policies. As a result, the temptation to resort to going it alone policies against illegal immigrants will be strong. Progress on a range of difficult key EU files, including the reform of the Stability and Growth Pact, appears even more challenging.

In sum, even if she succeeds in avoiding outright confrontation with Brussels, the tone could soon get rougher. The danger is that once a new conservative Italian government faces the inevitable complexities and disappointments of governing, the newcomers in power will quickly resort to the usual convenient scapegoating, blaming previous governments and Europe for most that is wrong with Italy. That is when EU partners’ current anxieties about Italy’s choices will be replaced by increasing irritation. 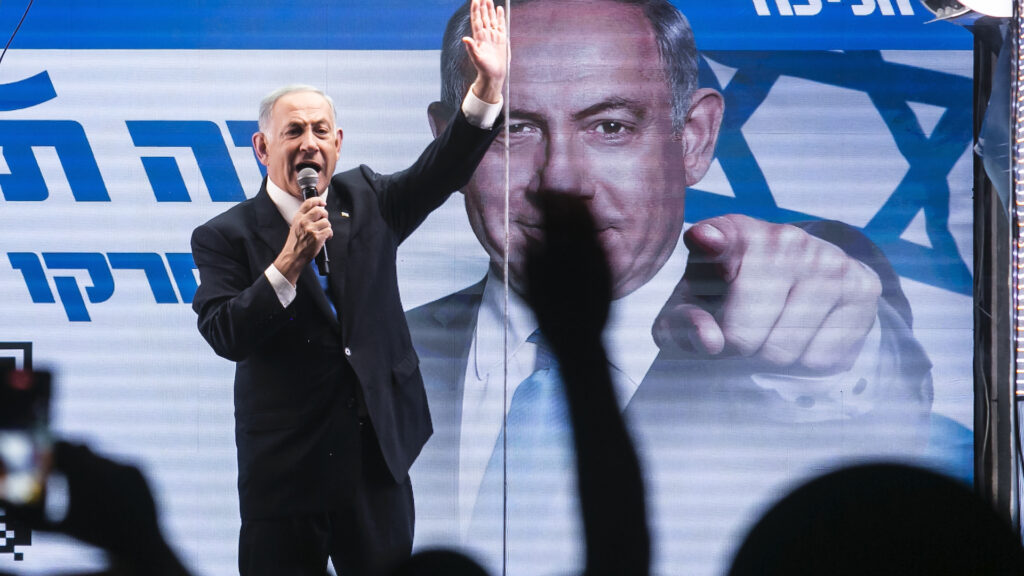 Peter Schechter Host of Altamar Global Issues Podcast and BRINK columnist Juan Cortiñas Founder and Managing Partner at Opportunitas Advisors
URL: https://www.brinknews.com/how-will-the-new-italian-government-handle-the-eu/
Get ahead in a rapidly changing world. Sign up for our daily newsletter. Subscribe
​​