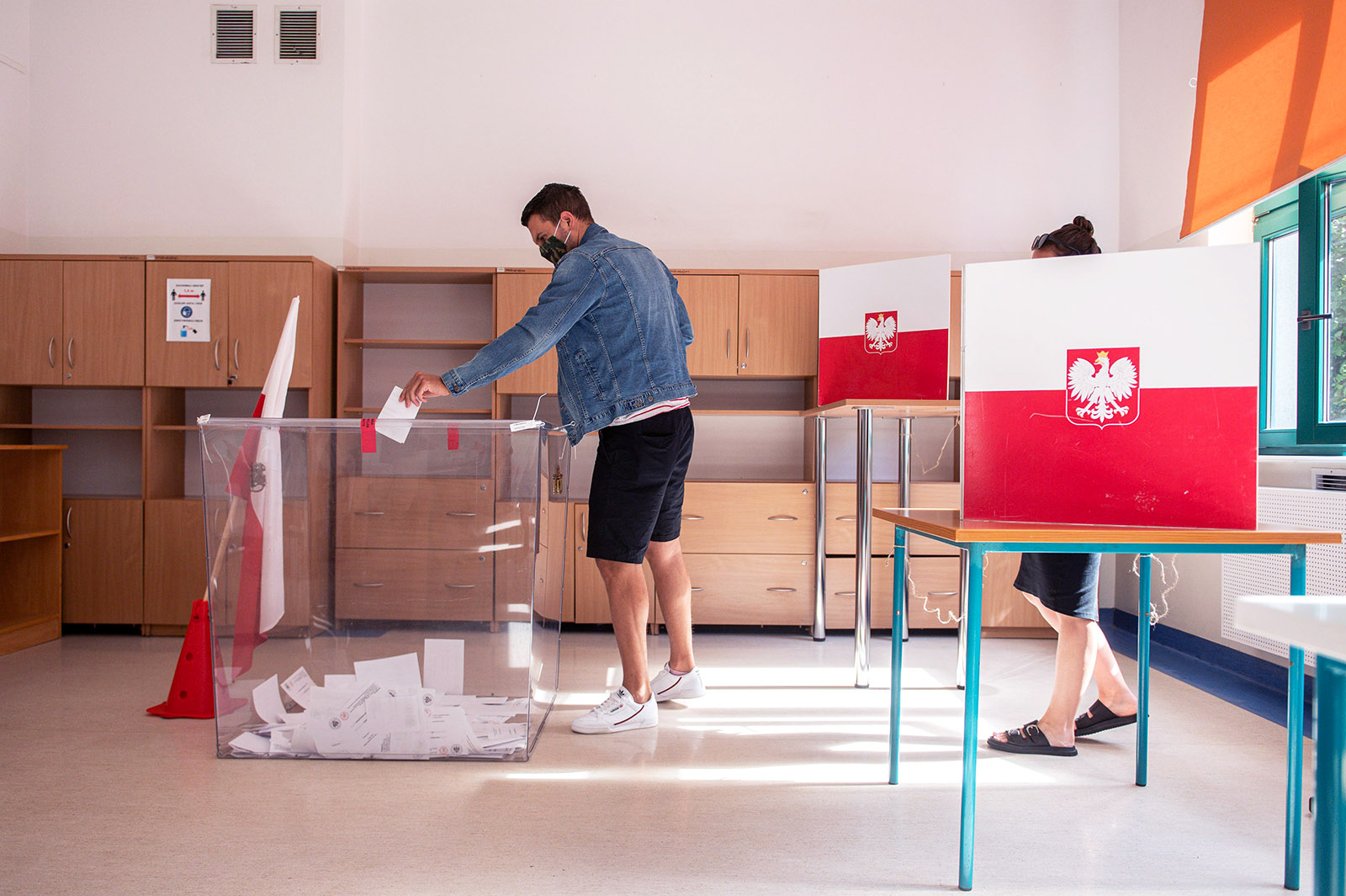 A voter casts his ballot on July 12, 2020 in Gdansk, Poland, during the second round of Poland's presidential election. Many EU leaders are concerned by the increasing authoritarianism in Hungry and now Poland.

On Monday, Poland’s Supreme Court upheld the narrow victory of President Andrzej Duda in last month’s elections. The outcome had been challenged by opposition supporters, but in the end the country’s conservative Law and Justice party will remain in power.

Poland and Hungary are the most visible examples of a growing trend towards populist authoritarianism in eastern Europe, which could impact the ability of the European Union to function. The re-election of the populist Duda reawakened painful differences within the EU about the importance of the rule of law.

The Contentious Rule of Law Question

The recent agreement on the next-generation EU deal has been hailed as a defining moment in the history of the EU. It certainly has the potential to live up to expectations, if adopted by the European Parliament and national legislatures in the coming months.

The ambitious compromise was possible despite the many differences between the many conflicting souls of the union, particularly between the so-called “frugal four” (Austria, the Netherlands, Denmark and Sweden, who initially opposed any deal) and the Visegrad countries (Hungary, Poland and the Czech and Slovak republics, all wary of more strict EU punishments of the rule of law breaches within their countries). In the end, the frugals had to give up more terrain than Poland and Hungary on the rule of law.

Growing rule of law concerns were merely addressed by a vague passage in the deal promising that the Council “underlines the importance of the respect of the rule of law,” and that “a regime of conditionality” to protect the budget and Next Generation EU will be introduced. “In this context, the Commission will propose measures in case of breaches for adoption by the Council by qualified majority. The European Council will revert rapidly to the matter.”

EU rules already allow for sanctions to be imposed in case of democratic breaches, but they are hard to implement. Many EU leaders, concerned by the increasing authoritarianism of Hungarian Prime Minister Viktor Orban and seemingly similar developments in Poland, want something more direct.

Indeed, the vague language in the so-called recovery plan pales in comparison to earlier promises of tough conditions. Not surprisingly, Polish Prime Minister Mateusz Morawiecki stressed that there is no direct link between the rule of law and the funds in the deal.

The European Commission, lawmakers, experts and activists all are increasingly worried that freedoms are under threat in Poland and Hungary.

The mechanism has yet to be created by a group headed by German Chancellor Angela Merkel and is to be accepted by the European Council later on. It is difficult to imagine that she will spend too much political capital on getting tough with countries that still use the history of past domination by Germany and Russia, in particular, to proudly defend their independence.

Merkel’s priority is still to “keep the shop together,” in other words, to avoid further divergence or, worse, exits from the EU. From her standpoint, the behavior of the Visegrad countries during the negotiations should be seen as encouraging.

It is now clear that the Visegrad Group’s geopolitical and economic priorities still lie very much within the EU, and there is little appetite to question the union, at least as long as its center, the EU Commission, is constrained in its ability to impose sanctions against them. Poland, in particular, will continue to use the EU for economic reasons, while welcoming United States troops and defense systems to bolster its own defense against any potential Russian aggression.

The EU Will Accommodate the Visegrad Group

Hungary’s Prime Minister Orban is much more ambivalent about Russia, but still a staunch defender of the EU (or his idea of it) when push comes to shove. At the same time, the deep differences between the Visegrad countries represent the weakness of the group. Populists tend to form ad hoc alliances and can quickly turn on each other when conditions change. Within the EU, I could name a few loose ad hoc alliances that have a very elastic concept of internal cohesion.

Their existence is not, per se, a threat to the union; rather, these groups form when bigger and more powerful countries come together to pull the EU in one direction, as was the case during recent negotiations on the recovery fund.

The very nature of a bloc of 27 countries makes subgroups inevitable, depending on which challenges they are trying to face. That is not to say that rule of law concerns should be taken lightly, especially if the EU really intends to fill the perceived moral void left by a U.S. government that many in Europe feel has turned inward.

The European Commission, lawmakers, experts and activists all are increasingly worried that freedoms are under threat in Poland and Hungary. Bulgaria and Romania are also cited as examples of countries with a questionable track record facing serious and widespread corruption challenges.

The Debate Will Not Disappear

As the EU moves forward on the need to start building a more resilient fiscal union, the question about the need for a new architecture and better decision-making processes will gain more traction. It is inevitable that the debate about the advantages or disadvantages of a multi-speed Europe will become once again more pressing. For now, Europeans can take comfort in the fact that, despite their deep differences, difficult decisions can still be taken.

The rule of law debate will continue to simmer. How it will evolve in the near future will also, in great part, depend on the outcome of the U.S. presidential election in November.

Alain Frachon Senior columnist for Le Monde
URL: https://www.brinknews.com/will-eastern-europes-growing-authoritarianism-tear-the-eu-apart/
Get ahead in a rapidly changing world. Sign up for our daily newsletter. Subscribe
​​