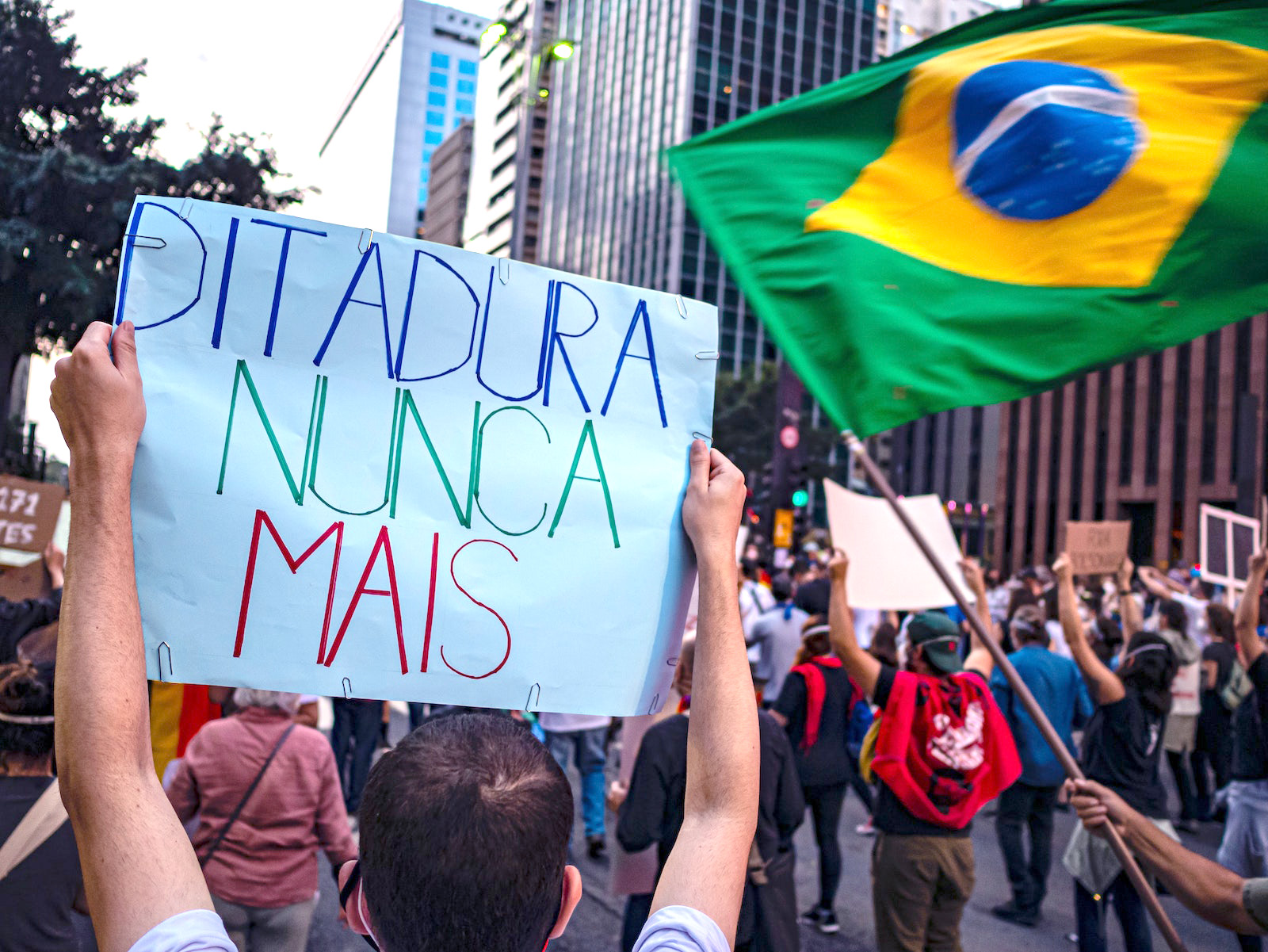 A protestor in Brazil holds up a sign that says "Dictatorship Never Again." Brazil may see a shift to the political left, as the flailing presidency of Jair Bolsonaro nears its end.

The closing of 2021 cannot come fast enough for Latin America. The region has been hit hard by the impacts of COVID-19 and its legacy of economic depression and political polarization. While many of the region’s economies began to recover after the devastation in 2020, improvements have been slow, not nearly enough to address the increases in poverty and national income reductions or to reverse the declines of the previous year.

A Collapse of the Moderate Center

Politically, 2021 cemented a collapse of the moderate center and saw a shift to extremes, mostly to the left.

Honduras elected its first woman president, Xiomara Castro, the spouse of former President Mel Zelaya, whose closeness to Hugo Chavez caused him to be vacated from office in 2008.

Peru elected an unknown teacher and political novice, who ran under the banner of a hard left political party headed by an avowed Marxist.

Chile, on December 19th, elected a candidate from the extreme left, ending three decades of moderates in the Palacio de la Moneda since the fall of former President Augusto Pinochet. All this while a constitutional assembly is drafting a new constitution, which is expected to strengthen the central government’s powers.

Looking ahead to 2022, the region seems to be heading to another lost year. Some countries, like Uruguay, Mexico and Brazil, have made important advances in vaccinating their populations against COVID-19. But a significant number of countries in the region remain mired in pandemic restrictions, overwhelmingly affecting the most vulnerable and dampening economic growth.

The region is predicted to continue to slowly return to pre-pandemic normalcy. But this, too, might stall with the rise of new COVID-19 strains such as Omicron, which are already beginning to generate new mobility restrictions in various countries.

As we look at our crystal ball for 2022, here are a few trends to watch in the new year.

Two presidential elections promise to rock the continent in 2022: Colombia and Brazil. In Colombia, Gustavo Petro, a sympathizer of Chavismo, is currently the heavy favorite to dominate round one of the presidential elections. A recent poll shows him garnering 43% of the first-round vote, close to the 50% threshold needed to avoid a runoff.

Petro’s election (he lost two previous presidential races) would be an earthshaking political event in a country known for its conservative politics.

The social protests that have shaken Colombia since 2019 and the harsh economic impacts of COVID have changed the country’s political landscape and dampened its historic conservatism.  It remains to be seen whether Colombians are willing to take a risk on him as a reaction to political and economic discontent. But one thing is for sure: A political shift to the hard left in the United States’ most important geopolitical partner in the region will have significant impacts.

Not to be left behind, Brazil, the region’s largest country, may also see a shift to the political left, as the flailing presidency of Jair Bolsonaro nears its end. Former President Lula da Silva, a former international darling whose reputation was damaged by his involvement in the Lava Jato corruption scandal, is the favorite.

While former President Lula da Silva is a known commodity, having ruled previously from the center-left, this time the former labor leader may not be so moderate. He is angry. His claims that he was improperly jailed by Brazilian elites for the corrupt excesses of others have made traction with voters. And the fact that he was not allowed a temporary parole from jail to attend his wife’s funeral turned him into an even greater victim in the public eye. Combined with the dramatic impacts of the pandemic, a future Lula da Silva presidency may well be more interventionist than was the past.

The region’s newfound penchant for authoritarianism will continue in 2022. From Presidents Nayib Bukele in El Salvador, Jair Bolsonaro in Brazil, Luis Arce in Bolivia, to Andrés Manuel López Obrador in Mexico, the region seems to be defaulting back to the days of the Latin American caudillo.

At the core of this new authoritarianism is an increasing trend to concentrate power on the executive, at the expense of independent institutions, especially the justice system, and expand the military’s role in the economic and social aspects of a country.

Perhaps the most intangible prediction centers on the ongoing social instability in many countries and how this will impact politics and economics.

As poverty rises in the region, Latin American governments are under increased pressure to bolster the social safety net. This puts most of them in a bind, as revenues have shrunk with the economic impacts of the pandemic on the global economy. This, combined with increased inflation and a strong dollar, will create rising debt burdens for many Latin American nations.

As governments search for more revenue, there will be a trend toward greater interventionism in the private sector, whether through increased taxation, regulatory encroachment or threats of nationalization. While this trend prevails mostly on the political left, it is also an increased rhetorical tool on the right, as populist tendencies grow popular with voters.

In Mexico, the government is moving to protect its lithium reserves from foreign investors, with President López Obrador recently stating that “Lithium is a strategic mineral that must remain under the control of the nation; we cannot leave it to the market.” The new Honduran president has also promised to nationalize certain economic activities.

A Pivotal Year for Mexico

President López Obrador insists on holding a “revocation mandate” election, essentially a fake recall election, allowing him to claim he remains a popular leader. And, given his high poll numbers, it may work to consolidate his power.

This has exacerbated his growing rift with the National Electoral Institute (INE), which expressed concerns about the irregular election. The political opposition is likely to boycott the vote to lessen its validity. But, if AMLO wins, he is likely to accelerate his push to remake Mexican institutions, subjugating previously independent state bodies to him and his allies.

Perhaps the most intangible prediction centers on the ongoing social instability in many countries and how this will impact politics and economics.

The past few years have seen unprecedented social conflict in countries such as Colombia and Chile, two of the most solidly economic and democratic countries in the region. This year has seen similar unrest in Bolivia and Brazil. While the ballot box has generated political changes, it is unclear whether this will be enough to temporarily halt unrest in key countries.

In Peru, we have already seen the impact of social conflict. A Chinese mining company, MMG Ltd., has threatened to shut down operations if the government does not control the social conflict blocking its daily operations.

The social unrest is creating hesitation about investing in this industry, the leading revenue generator for the country: “Companies are starting to wonder if staying in Peru is worth it,” said Raul Jacob, head of Peru’s mining society and chief financial officer of Southern Copper Corp. He said that even as one conflict gets resolved, “it’s just a matter of time until another one explodes. There’s no solution to the root problem.”

2022 promises to be a challenging year for Latin America. The most optimistic view is that the region will slowly emerge from the economic and social challenges created by the pandemic. But poor policy decisions, political unrest and the continued undermining of independent institutions may keep stalling a recovery, exacerbating the deep social concerns already bubbling.

Peter Schechter Host of Altamar Global Issues Podcast and BRINK columnist Juan Cortiñas Founder and Managing Partner at Opportunitas Advisors
URL: https://www.brinknews.com/2022-is-going-to-be-a-tough-year-for-latin-america/
Get ahead in a rapidly changing world. Sign up for our daily newsletter. Subscribe
​​