BRI and the Promise of Cooperation 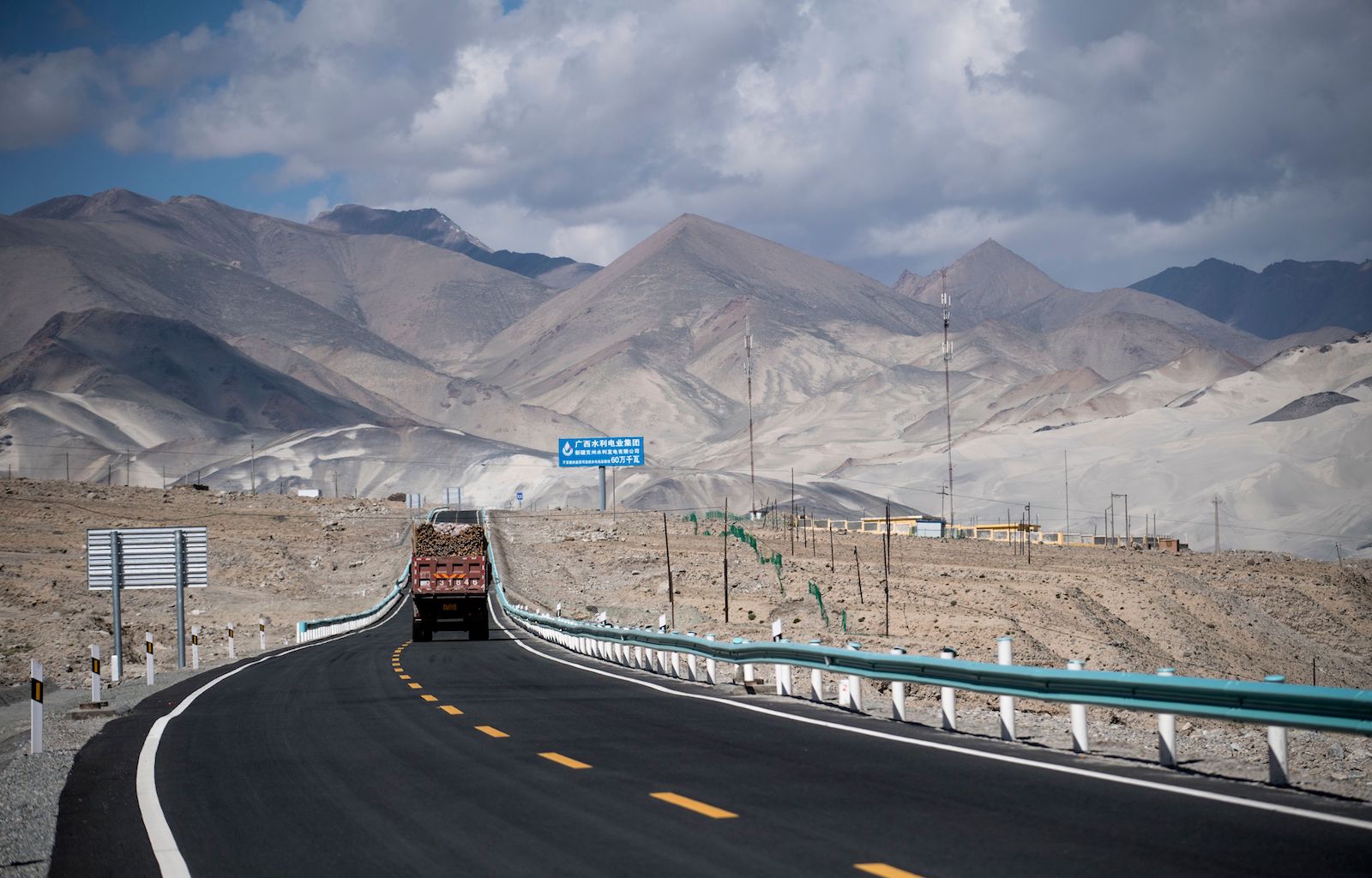 A truck drives along the China-Pakistan Highway before the Karakorum mountain range in China. The Belt and Road Initiative holds great promise for both China and partner countries.

The Belt and Road Initiative holds great promise for both China and partner countries, but the success of the endeavor is dependent in no small part on how well the various stakeholders can cooperate and collaborate. Failure to do so effectively is a risk for China and participating countries, as it could limit gains from the BRI, according to Chatham House’s Andrew Cainey.

BRINK Asia: One of the main aims of the BRI is to use infrastructure to drive economic development in partner countries. However, this depends on the capacity of partner governments to create the right conditions and implement appropriate policies. How do you see this playing out?

Andrew Cainey: That’s exactly right. The promise and proposition of BRI is attractive and builds on China’s own development experience. But the reality depends on execution—project definition and terms, how partner countries engage with China and China’s own response. Others see the need for infrastructure, too, but struggle to find bankable projects that fit the required terms or get tied up in approval processes and assessments so that projects take years to materialize. Success rests on putting in place more appropriate, responsive policies and regulations that allow things to move forward but still provide oversight.

Capacity-building in governments is an important part of this and also helps make sure that there is a better balance in negotiation of terms with China. Countries with a range of choices—often the wealthier and larger countries such as Malaysia and Indonesia—are better placed both to see the need for the right regulatory environment and to negotiate the right mix of terms with China. Multilaterals, such as the World Bank and indeed China itself, need to help less-advanced countries put in place the right delivery capacity and guard against excessive debt commitments.

BRINK Asia: For global banks, what are the opportunities and risks associated with funding BRI projects and what are the ways to mitigate them?

Mr. Cainey: They certainly see the opportunity at the overall level—and, naturally, want to be a part of what is the major overseas financing initiative of the world’s second-largest economy. But they’ve been looking at emerging-market infrastructure investment opportunities for years and struggled to find projects that are attractive. There are usually good reasons why these projects have not moved forward on a commercial basis: gaps in the regulatory and legal environment; unclear cash flows and lack of a commercial basis for lending; questions of compliance and sovereign risk. What BRI does is put renewed momentum and focus on the topic and offers the opportunity for a fresh look at addressing the issues. Institutions could then structure the project financing so as to create tranches of commercially attractive debt financing alongside policy-based or concessionary lending. There’s also more potential with BRI for a “bootstrap” effect, where a critical mass of infrastructure spending does in fact generate significant additional economic activity, which in turn helps pay for the initial infrastructure. For example, land becoming more valuable as improved transportation links attract investment interest in industrial parks. This has been an important part of the story in China. But it cannot be relied on as something automatic in all circumstances.

BRINK Asia: What role do you foresee private investment to eventually have on the BRI?

Mr. Cainey: At this stage it is still unclear—for two reasons.

First, BRI is being used by the Chinese government as a very broad term that can include pretty much any activity by China in another country—certainly, in terms of economics, trade and investment, but also in terms of people-to-people relations and culture. Private Chinese companies, at the very least, will be heavily involved in these—and as foreign private companies partner with the Chinese, so they too are involved. In this sense, the role of private investment depends on how China chooses to communicate which activities form part of BRI. But this is really semantics rather than practical action.

So, more practically and second: What role will private-sector finance and companies play in specific investment projects, especially infrastructure? That rests on how all sides create bankable opportunities with commercially attractive sub-projects, even if the economic returns from the main project are long term and uncertain. It rests on acceptance of competitive open tendering on contracts—so China accepting more transparency in at least some projects and giving up some control to market-based decisions. Putting these elements in place is certainly the route for BRI to become a reality on a much greater scale. Without private financing, the number of new infrastructure projects will inevitably run up against the financing limits of Chinese policy banks.

All sides need to be happy with what they are getting out of it, or governments will start to shun projects under the BRI label.

BRINK Asia: Is there anything in place for dispute resolution between countries in the BRI? Who dictates this, and how can it be made seamless?

Mr. Cainey: To date, most of the dispute resolution has been bilateral between China and the partner country involved. It is also often not transparent and, at the highest level, happens informally, government-to-government. Recent discussions relating to both Sri Lanka and Malaysia illustrate this. At the more operational level, Chinese state-owned enterprises have been increasingly using commercial arbitration either in China or in Singapore/Hong Kong.

There are also changes afoot. First, China has announced its plan to establish BRI dispute-resolution courts within China, but these are intended to operate in line with global principles and practices, not as part of the domestic Chinese legal system—just as the newly founded AIIB is adopting the approaches of the World Bank and other multilaterals, recruiting staff globally and is a Chinese-led multilateral bank rather than a Chinese bank. The other key influence on this is how much and where market-based commercial finance comes into play: The more that internationally accepted and transparent dispute resolution mechanisms are in place, the easier it will be to attract private-sector financing.

BRINK Asia: In recent times, there has been talk around the “Digital Silk Road” and its role in the BRI. How important is that, both for the BRI and for businesses along the BRI?

Mr. Cainey: How crucial the digital part will be rests on how important it is in substance—and the answer is very important. First, digital and technology is an important part of modern-day connectivity, and connectivity is at the heart of BRI. Second, China has its own model of Internet development and management that it is keen to promote internationally—both in terms of technical standards and its approach to censorship and content management. This can be attractive to some partner countries, especially those that seek to manage Internet activity. Finally, there are a host of Chinese technology behemoths that are keen to continue their international expansion—from Alibaba and Tencent on the Internet to infrastructure equipment providers such as Huawei and ZTE. These latter two companies are now encountering problems with government approvals in Western markets and are looking to strengthen positions elsewhere.

BRINK Asia: How do you see multilaterals combining efforts in the BRI?

Mr. Cainey: There is a lot of opportunity to cooperate and collaborate in terms of project finance structuring and funding and in helping partner countries with the capacity-building needed to enhance project success. As a new multilateral, the AIIB, for instance, is already cooperating well with ADB and the World Bank. The bigger opportunity is for cooperation between the multilaterals and the Chinese policy banks, which are the main sources of funding to date. This cooperation can provide a useful bridge for bringing in commercial financing and helping with capacity-building in partner governments.

BRINK Asia: Many are touting the BRI to become perhaps the world’s largest platform for regional collaboration. Your views?

Mr. Cainey: BRI certainly has the potential to become a major platform, but the proof will be in the execution. It will depend on how China ends up working with and learning together with partner countries, the multilaterals and the private sector. BRI is in its early stages: The aspiration of cooperation, learning and private-public financing has great promise. But that requires significant changes from the early projects, which have been financed and built predominantly by the Chinese with little transparency on terms and questionable commercial attractiveness. We are seeing some push back now on the terms negotiated—Malaysia being the most prominent example. This to-and-fro is exactly what is needed to help the healthy evolution of BRI. All sides need to be happy with what they are getting out of it, or governments will start to shun projects under the BRI label.

Done well, BRI creates new connections to ease and reduce costs of trade to and from China: It is easier for trade to flow where paths have been laid down than not. The overall rhetoric today is broad and nonspecific—it allows pretty much anything to do with China’s overseas engagement to be incorporated within BRI. If things work well, this can lead to increasing momentum, experimentation in different ways to see what is most effective, and a broader range of activities. But, if the BRI becomes tainted as a result of problems in specific countries, it will prompt a rethink and lead to a more limited definition of the project.

Tom Friedman Author, Reporter and Columnist for The New York Times
URL: https://www.brinknews.com/bri-and-the-promise-of-cooperation/
Get ahead in a rapidly changing world. Sign up for our daily newsletter. Subscribe
​​