Drones Prove Their Value in the Field 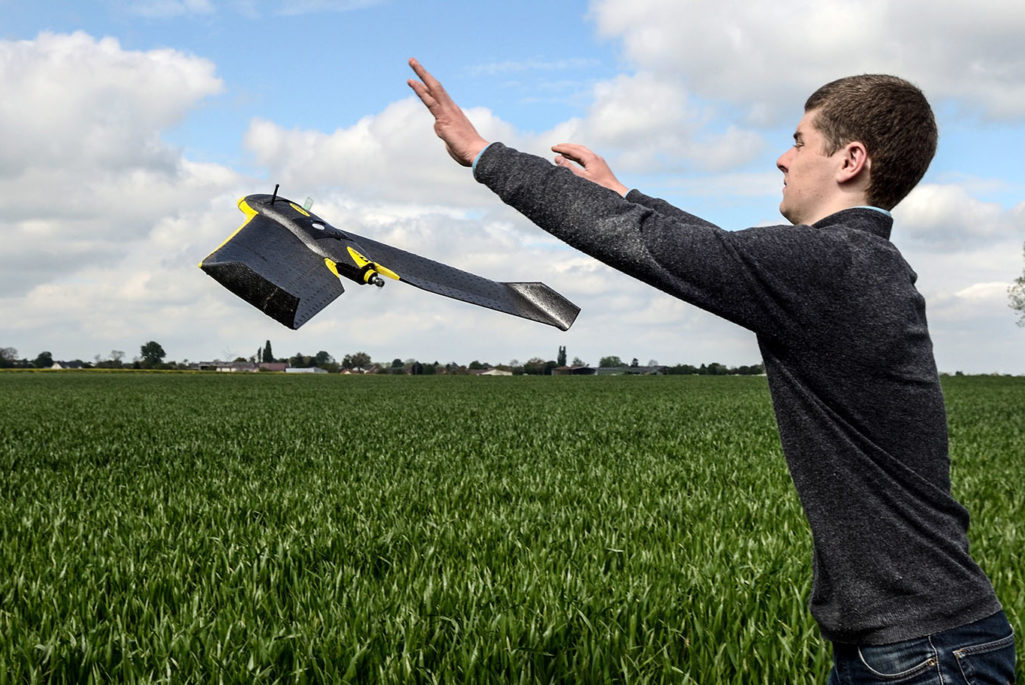 A drone pilot launches a drone plane over a crop field on May 6, 2014 in Caulieres, northern France, The GPS guided drone surveys an area by measuring the supply of nitrogen necessary to improve productivity, allowing farmers to adjust and limit the use of crop treatment products.

Unmanned Aircraft Systems (UAS), or “drones,” are known for performing dull, dirty, and dangerous military jobs; however, drones used for commercial purposes must also add value by being better, faster, and cheaper than existing tools to be effective.

New regulations allowed the Federal Aviation Administration to grant requests for exemptions for drone use in United States airspace, on a case-by-case basis, for commercial use. As of July 31 the FAA has granted 958 requests for exemption, an incredible amount considering there were only four petitions granted 10 months earlier.

These exemptions form the foundation for unmanned aircraft (the flying component of the UAS) to be considered as an additional tool in performing inspection and monitoring jobs with less risk to the inspectors, more expeditious means of data collection, and at less cost than other inspection tools. This foundation’s success is predicated on the safe and responsible use of the technology—minimizing any new risks to other aircraft, people, privacy and property. Two sample industry examples that may benefit from these value propositions drones are agriculture and bridge inspections.

Drones may improve accuracy in suggesting corrective actions to farmers.

U.S. farmers lose an estimated $20 billion per year from problems with plant fertility, weeds, disease and insect infestation, and irrigation problems. Drones will not replace crop scouts or agronomists in the agriculture industry; however, they may help these experts improve their accuracy in suggesting corrective actions to farmers. An unmanned aircraft carrying multispectral laser or thermal imaging sensors collects high-resolution remote sensing data that still must be interpreted. Drones are one of many remote sensing tools that scouts or agronomists may use to correlate with ground observations to optimize their ability to estimate crop yield; monitor vegetation stress levels; monitor the phenological development of crops; create georeferenced biophysical classification maps; and detect changes in crop health after applying irrigation and fertilization management policies.

The Congressional Research Service forecasted the cost for seed, fertilizer, pesticide, and crop insurance will increase by 5 percent in 2015. Some U.S. farmers use manual labor for crop scouting and apply blanket fertilization or irrigation policies to minimize crop yield losses. Remote sensing technology, such as the data provided by drones, can increase the information available for farmers to use variable rate applications of fertilizer and decrease the cost of inputs to the field. Researchers found that farmers’ adoption rate of remote sensing technologies to apply fertilizer was just 5 percent in 2001. But scholars from Purdue University reported future remote sensing technologies might increase profitability to farmers by up to $78.43 per acre.

According to the Federal Highway Administration’s National Bridge Inventory database of deficient bridges, the proportion of bridges reported as structurally deficient declined from approximately 21 percent in 1993 to 10 percent in 2014. The improvement may be in part because of the National Bridge Inspection Standards requiring bridges greater than 20 feet in length be safety inspected every two years.

Traditional bridge inspections disrupt traffic patterns, require specialized equipment and heighten inspectors’ risk. Drones could be used as a tool for inspectors to perform field inspections in difficult-to-reach areas with their ability to precisely locate the imaging sensor, reducing the need for condition sketches and improving safety by reducing the inspectors’ exposure to dangerous positions.

Data from high-definition UAS electro-optical, thermal imaging, and laser sensors captured at centimeter-level resolution during the field inspection process can be used to support fracture-critical determinations by structural engineers. And drone sensor data can support visual inspection condition ratings determined by inspectors in individual bridge inspection reports, composited into three-dimensional mosaics to support electrical hazard surveys, or measure the amount of changes to condition over time.

According to a 2012 article published in The Columbus Dispatch, a bridge inspection can cost up to $10,000 per bridge. In a report to the Wisconsin legislature, the estimated cost to inspect state bridges increased 8.3 percent from FY 2002-2003 to FY 2006-2007. Additionally, in a 2013 New York study on the variation between bridge inspectors, researchers found the average time to inspect the bridges was 3.9 hours. Researchers also found a 33 percent increase in the quantity of photographs taken with inspections longer than four hours, compared to inspections less than four hours. The study also discovered a correlation between the time spent on field inspections and level of detail within the report, drawing the conclusion that drones can be effective tools in bridge inspections.

The rapid deployment of drones within hours of special situations such as post-flood or post-seismic events may significantly mitigate the risk of injuries or death caused by a bridge collapse from those events. The value of injury or death prevention is incalculable to many people.

As the permissiveness of non-recreational drone operations expands, their value as better, faster, and cheaper inspection and monitoring alternatives should be considered. If a value proposition exists and drones are responsibly used, this growing technology can reduce risk, increase response time, and efficiently enhance the level of actionable information; however, analysis and correlation with other available information must also be used to provide a comprehensive understanding within the industries using them.

Dr. Joseph Cerreta is an Assistant Professor at Embry-Riddle Aeronautical University. Prior to university teaching, he was a Program Manager for Textron Systems leading multiple UAS training and services projects.

Reid Blackman Author of "Ethical Machines"
URL: https://www.brinknews.com/drones-prove-their-value-in-the-field/
Get ahead in a rapidly changing world. Sign up for our daily newsletter. Subscribe
​​